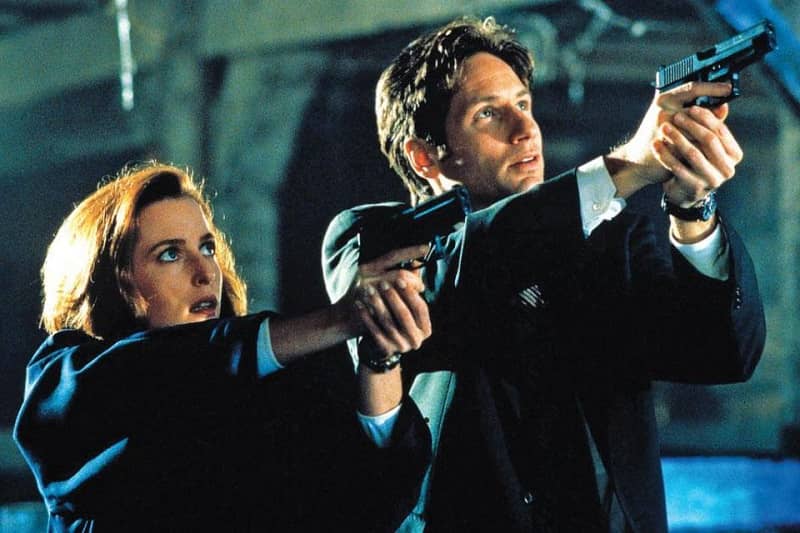 In 1993, I for some reason started watching a new show called The X-Files from the pilot. It was a lark. A few weeks prior, I had started my first job after graduating from university. I did not make much money, and in those days, Friday night television often featured the science fiction shows. Anyway, I started watching The X-Files and was hooked on Chris Carter’s drama. While never a believer in either UFO abductions or deep state conspiracies, I enjoyed watching such fare.

For some reason, the early 1990s spawned conspiracy-based, dark horror games like Dark Conspiracy and Delta Green, a sourcebook for Call of Cthulhu. Maybe it was the end of the Cold War and the need for something to haunt our thoughts when the fear of global nuclear holocaust dissipated with the collapse of the Soviet Union. All those years of nuclear terror found an alternative outlet for our existential fears. 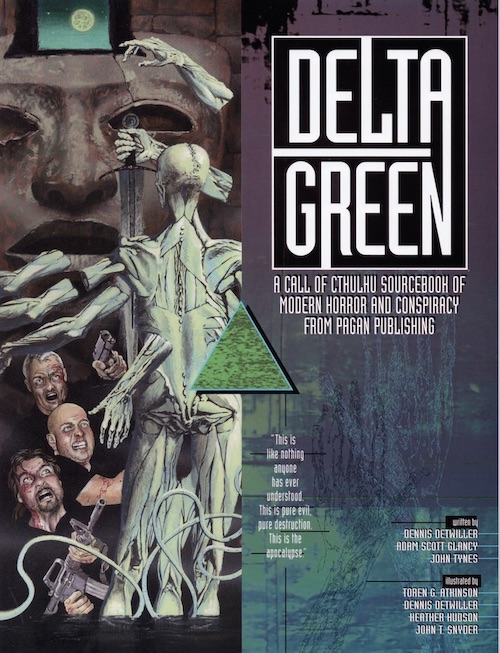 Dark Conspiracy and Delta Green in some ways have much in common, while diverging in notable ways. Both operate in a world where a deep state conspiracy exists to hide, cover up, and otherwise obfuscate the existence of alien and unexplainable phenomena in the world. 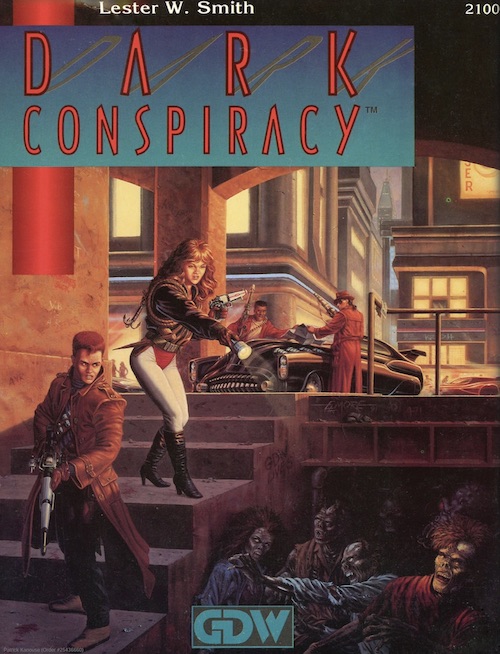 Dark Conspiracy, first published by GDW in 1991, is set in a post-apocalyptic world with strong cyberpunk influences. Megacorporations operate beyond effective governmental control, environmental devastation has displaced millions, and the central governments have lost control of large swathes of territory and populace. All of this, however, has an origin and rationale in Dark Conspiracy. 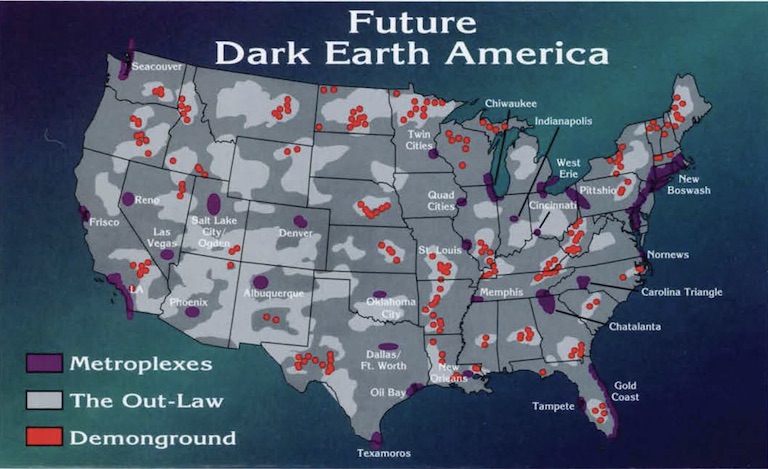 The state of America in Dark Conspiracy

In 1945, a group of exploring extraterrestrials visited our solar system. They began surveying our planet, trying to determine what to do with the folks who possessed nuclear weapons and had a proclivity for killing each other. After a crash near Corona, New Mexico, the extraterrestrials contacted the US government, making their presence known.

Out of fear of how the public might respond, both sides mutually agreed to keep the presence of the aliens secret. Over the decades, contacts and an exchange of information continued while the aliens explored the rest of the solar system. In 1983, everything changed when they opened a long quiet portal to an alternate universe. From there, emerged the Dark Ones. The Dark Ones are corrupted, evil telepathic beings. Unfortunately, the peaceful extraterrestrials were also telepathic — the game uses empathic. The Dark Ones took over the minds of the aliens. Those not driven mad became tools in the Dark Ones’ evil plans.

Suddenly, reports of alien abductions and horrific experimentation emerged. Meanwhile, they opened other portals in the solar system, including ones on Earth. In the past, these portals and the alternate dimensions had leaked into ours — accounting for werewolves, vampires, zombies, and other legends. These and the empathic humans corrupted by the Dark Ones are the Dark Minions. As the portals on Earth erupted open, those areas became Demonground, haunts of the Dark Minions, and the Dark Minions begin to influence the world, bringing out the worst of humanity and sending it down a corrupt path that results in the setting of the world. 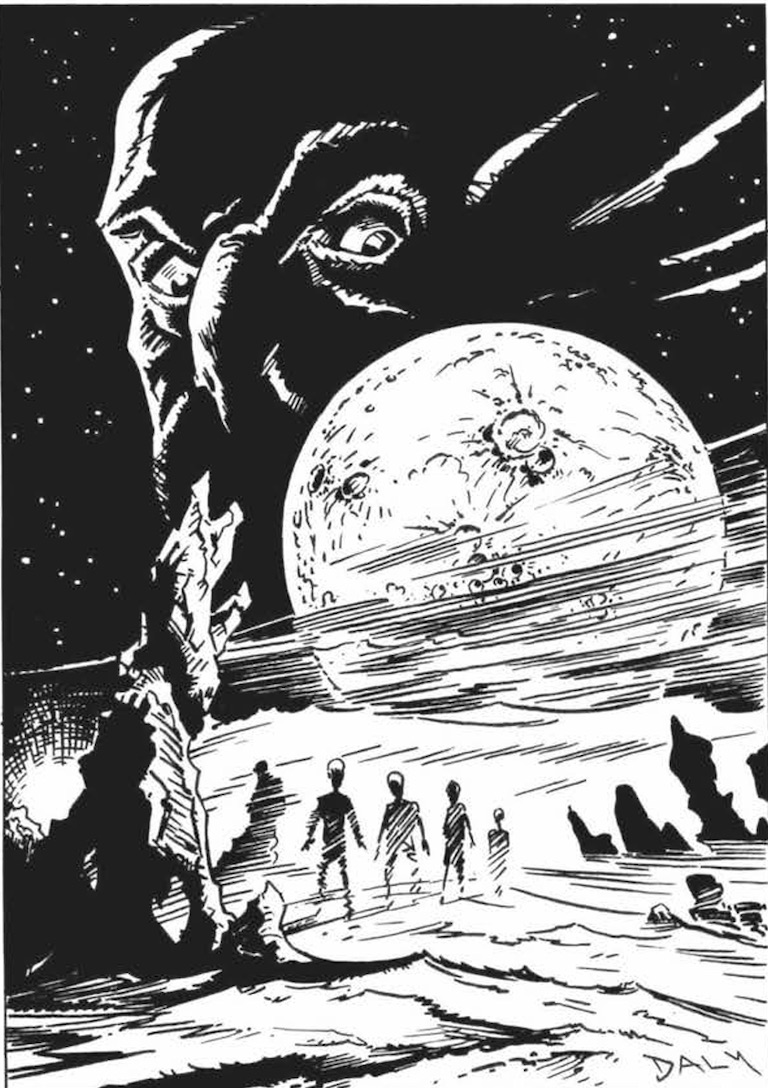 The first edition of Dark Conspiracy uses the Twilight: 2000 first edition rules, modified a bit of course to allow for the empaths. The second edition, published by Dynasty Publications a few years after the demise of GDW, adopted the Twilight: 2000 v2.2 and Traveller: The New Era GDW house rule set, which is generally regarded as an improvement over the earlier set of rules — which I agree with. The basic task resolution system adds the characteristic and skill (called the asset) and the difficulty of the task multiplies that asset to determine the target number the player must roll under on a 20-sided die for success. For example, if Sam wants to sneak by a guard, she would use her Dexterity of 5 and her Stealth of 2–asset of 7. If the guard is asleep, this is an Easy task, so 7 x 4 = 28. The only way Sam will fail is if she rolls a 20. However, if the guard is awake and paying a modicum of attention, the task is now difficult — 7 x 1–so Sam now has to roll under a 7 to succeed.

Both editions feature a bestiary of the Dark Minions the characters are likely to encounter, and the rules use a character creation mini-game derived from the original Classic Traveller character creation system. Michael Stackpole even wrote three novels in the Dark Conspiracy setting. 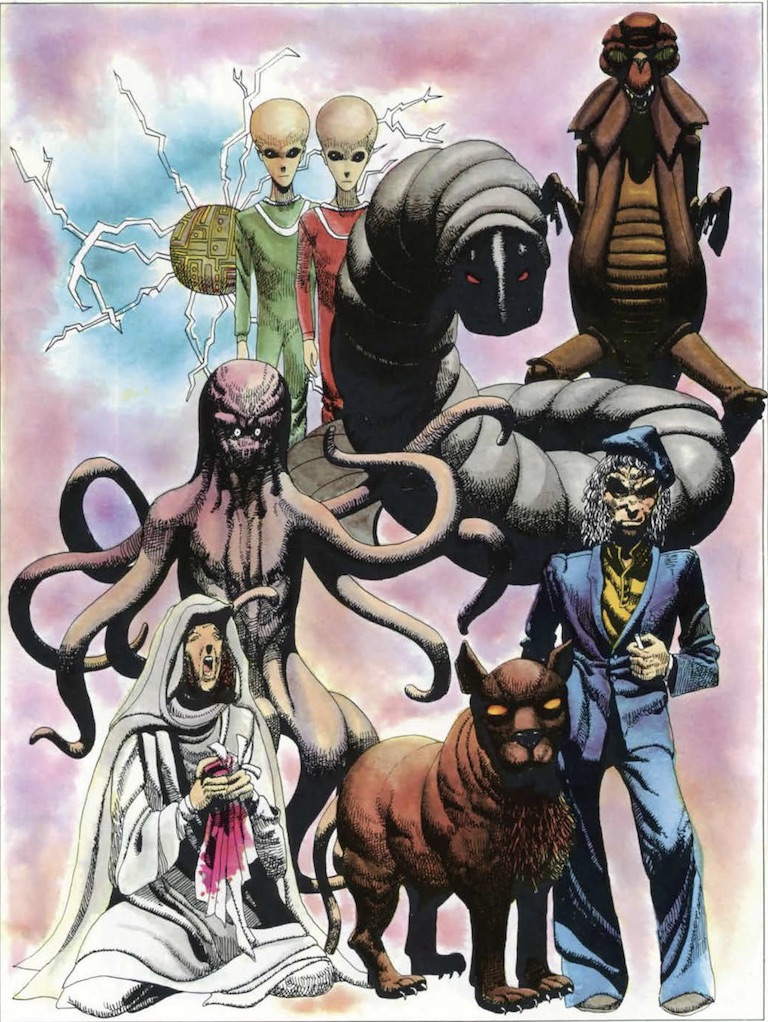 Some monsters from Dark Conspiracy

Delta Green first appeared in The Unspeakable Oath issue #7 in 1992 and then was published by Pagan Publishing as a sourcebook for the Call of Cthulhu RPG before becoming a full rule set RPG on its own from Arc Dream Publishing in 2016. In contrast to Dark Conspiracy, Delta Green is rooted in the world we know today but gives in to its cosmic horror, the Cthulhu Mythos — the fictional overarching setting created first by American horror writer H.P. Lovecraft and expanded upon by August Derleth (who coined the term “Cthulhu Mythos”), Robert Bloch, Robert E. Howard, Fritz Leiber, and many others, continuing to this day. 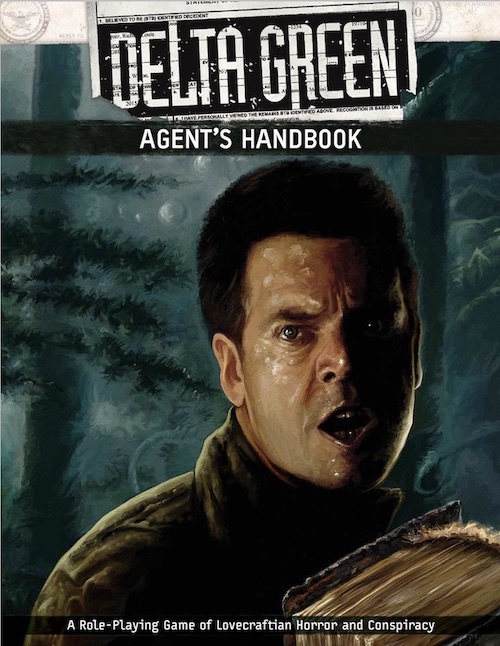 Delta Green uses Call of Cthulhu and Chaosium’s Basic Role Playing rules as its basis, which is percentage-based. Kelly, an FBI agent, arrives at a scene of a murder, which seems to encompass some weirdness that Delta Green has sent her to investigate. As she examines the room, she uses her Forensics skill to evaluate the scene. She has a 40% skill rating, so she rolls two ten-sided dice and needs to roll 40 or under to succeed. If she has some tools handy to her that would aid her, then she may get a +20% to her number to succeed. Delta Green uses a Lethality rating for some weapons rather than damage, which means if you get hit with automatic fire from a submachine gun, roll the two ten-sided dice and if it is under 10%, the character is dead (a cruise missile’s Lethality rating is 80%). As with Call of Cthulhu, Delta Green has a Sanity characteristic to track the decline in a character’s ability to deal with the horrors they encounter and the deeds they must do to protect every day Americans from that horror. Running into a mi-go, killing someone to ensure they do not spread the contagion, or reading the Courtis Paper can all trigger sanity loss. While the characters have some measures to fight against that, in the end, the cosmic horror will win. 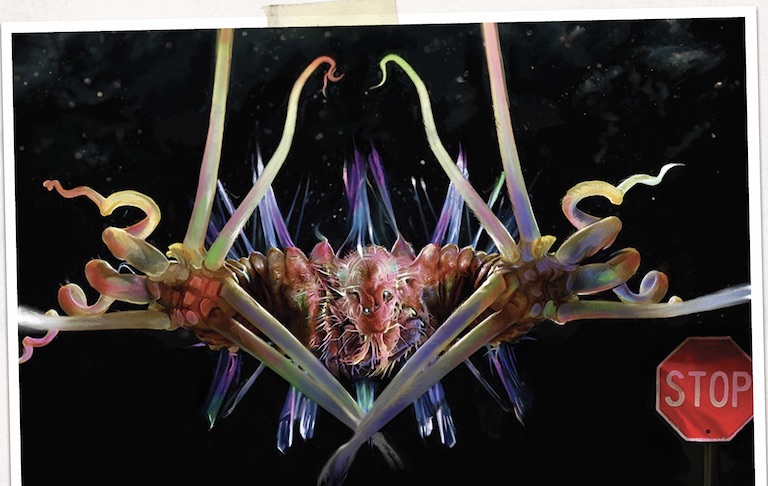 Dark Conspiracy’s evil force is more coherent and organized, if still beyond human understanding. Delta Green’s, on the other hand, embodies cosmic horror in that the threats to humanity are incomprehensible and always will be. Nonetheless, both often use actual events or existing conspiracy theories and fit them into the book’s setting. Both use the infamous UFO crash of Roswell. For Dark Conspiracy, it prompted the extraterrestrials to communicate with humanity. For Delta Green, it brings about an encounter with the Greys, a construct of the far more insidious mi-go along with establishing MAJESTIC, a primary human adversary of Delta Green. 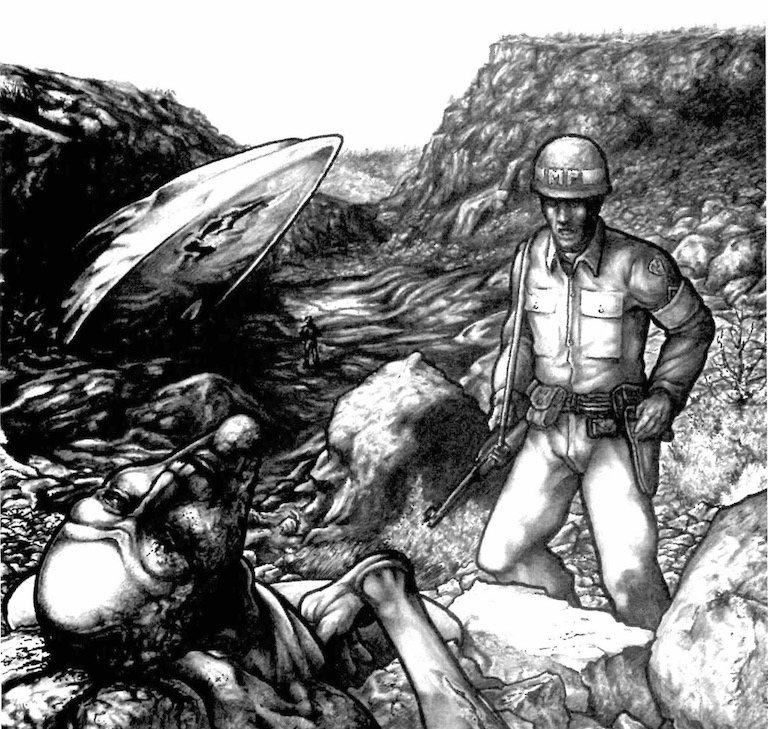 Despite those differences, both Dark Conspiracy and Delta Green are about confronting the unfathomable and deadly. For a player, a perhaps more significant difference exists. They approach the world of conspiracy from two different sides.

In Dark Conspiracy, the players play the role of normal, or perhaps not-so-normal, human beings who are fighting a global menace of unprecedented proportions. An alien, malevolent intelligence, imprisoned for eons, has been released to wreak havoc on the world. It is doing a pretty good job.

“Your character has become aware of this menace and, along with a small band of like-minded companions, has set out to uncover and destroy the menace.”

Delta Green, at its core, is about protecting the American public from the unnatural.

In other words, in Dark Conspiracy, the characters are fighting against the conspiracy. In Delta Green, characters are agents of the conspiracy. This does not make them evil, however — just as fighting against the Dark Ones does not make Dark Conspiracy characters inherently good. It does make for interesting game dynamics. Dark Conspiracy is more traditional in this regards — a group of players working together to overcome long odds — maybe — to expose and defeat the Dark Ones and their minions. Victories — small they may be — are possible. 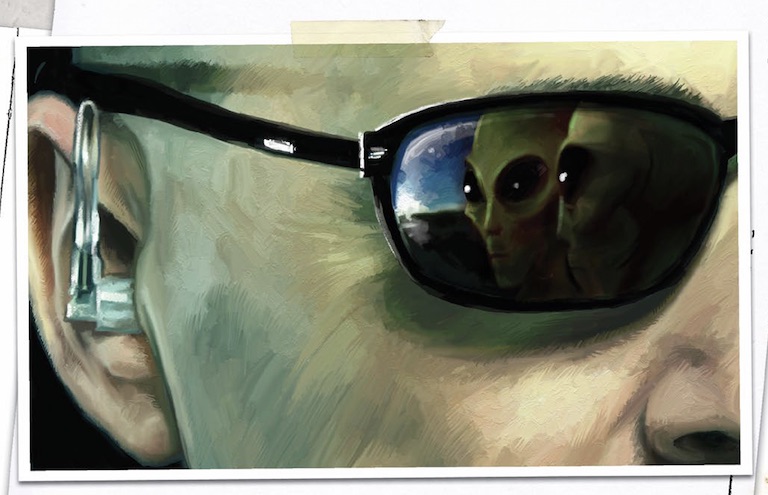 Delta Green, on the other hand, is about characters encountering the Mythos — or humans obsessed with some version or aspect of the Mythos and doing terrible deeds — containing the said threat and ensuring the wider public is ignorant of it. This often requires questionable actions — whether it be minor criminal offenses to being complicit in a murder. This comes at the cost of the Delta Green’s agent’s eventual well being.

Delta Green, I think, works best with small groups of players. Two to three is optimal. Additionally, it tends to work better more episodically. Longer campaigns (I am thinking here of the typical Dungeons & Dragons, Traveller, or Star Wars campaigns that have dozens of sessions spanning several years) have challenges of both keeping the players alive and sane — unless players are willing to lose their agents along the way. For agents, the Lethality rating used in the game is less likely to end in their demise than eventually losing their mind. That said, longer campaigns can be created, though that is not the game’s sweet spot.

Both are excellent games. While the current versions of Dark Conspiracy are a bit old school — they were published in the 1990s), Amargosa Press acquired the Dark Conspiracy license earlier this year and is preparing a new edition of the RPG and setting.

Meanwhile, Delta Green continues strong with substantial support via scenarios and a recent addition to the setting with The Labyrinth — this from one of original co-creators of Delta Green, John Scott Tynes — that provides a set of allies and enemies that evolve and grow as your players’ agents engage with them. 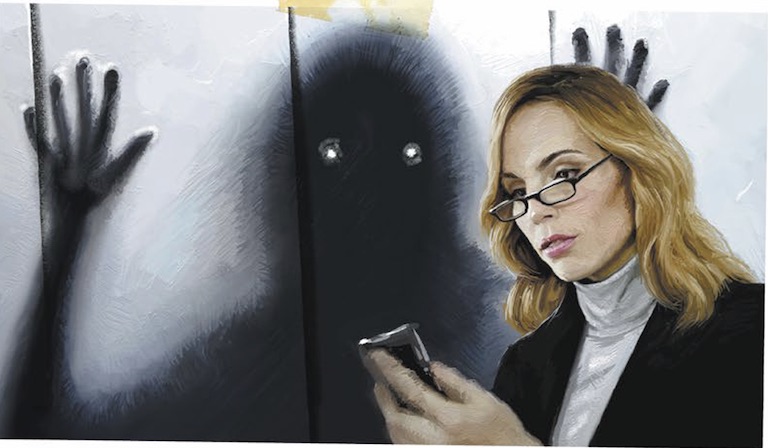 Both games have rich and interesting settings. For Dark Conspiracy, we shall see what Amargosa Press brings forward to re-invigorate the RPG for current players. In some ways, the game you choose depends on whether you want to play agents for or against the conspiracy. And while Dark Conspiracy offers some hope that the Dark Ones can be defeated — as foolish or unlikely as that is — Delta Green offers no such hope. Death and insanity eventually overcome the agents fighting to ensure the world does not know of the horror just beyond their vision. That, perhaps, is the only consolation — the agents sacrifice so the rest of us can sleep without in peace. 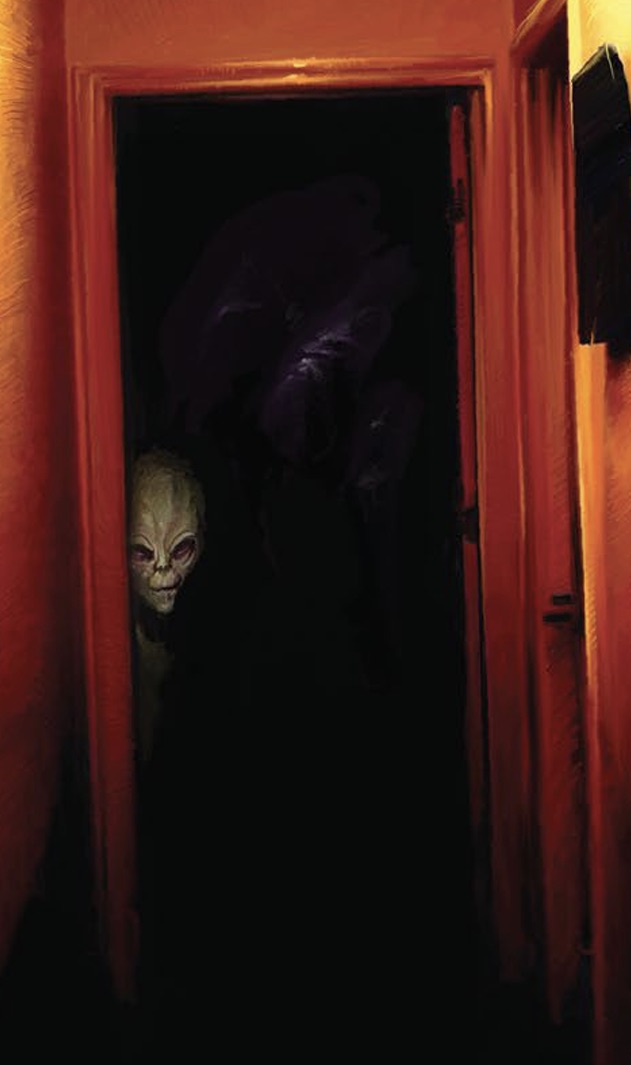 Patrick Kanouse encountered Traveller and Star Frontiers in the early 1980s, which he then subjected his brother to many games of. Outside of RPGs, he is a fiction writer, avid tabletop roleplaying game master, and new convert to war gaming. His last post for Black Gate was Exploring Post-Apocalyptic Poland in Twilight: 2000. You can check out his ongoing, play-by-post, referee-less Traveller game at basiliskstation.blogspot.com. Twitter: @patrickkanouse. Facebook: facebook.com/patrickkanouse