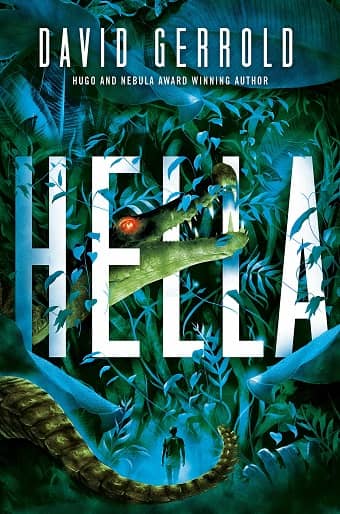 David Gerrold is the author of some three dozen novels and collections, including When Harlie Was One (1972), the Star Wolf novels, Jumping Off the Planet (2000), and the as-yet unfinished War Against the Chtorr series. Not to mention his acclaimed non-fiction books on Star Trek, including the classic The World of Star Trek (1973).

I first heard about his new SF novel Hella at Tammy Sparks review blog Books, Bones, & Buffy, where she wrote,

I loved the idea of a group of colonists living on a planet where everything is huge… Gerrold does a great job of setting the stage and presenting a cool idea.

I wasn’t even aware that there was a new book by Gerrold, but I’m excited to see it. And like Tammy, I’m very intrigued by the premise. (Are there alien dinosaurs?? Please let there be alien dinosaurs.) It received a starred review at Publishers Weekly, and you know what that means — it must contain dinosaurs. Here’s a peek at the review.

Hugo and Nebula Award–winner Gerrold (The Martian Child) showcases his powerful storytelling skills with this outstanding tale of interstellar intrigue. Hella is a planet of extremes, so named because its oxygen-rich atmosphere causes everything from the trees to the leviathans that inhabit it to grow “hella big.” The barely self-sufficient human colonists who call Hella home flee its blistering summers and harsh arctic winters in a biannual migration. Among these colonists is Kyle, a neuroatypical 13-year-old with a chip implant meant to regulate his emotions…

The worldbuilding is masterful, with hard scientific explanations for Hella’s many abnormalities and rich descriptions sure to keep the attention of even the most casual reader. The effortlessly diverse cast, complex political machinations, and heartfelt coming-of-age themes combine to create a fleshed-out vision of the future that is intense, emotional, and immersive while still maintaining a sense of rollicking fun. Sci-fi readers should snap this up.