When I pick up an old paperback these days, it tends to be an anthology or collection. There aren’t very many published nowadays, and I miss them.

So naturally I’m reading many of the old paperbacks I missed out on in my youth. One of my recent favorites is Beyond the Beyond, a thick collection of six stories by Poul Anderson. Anderson was one of the most prolific SF writers of the 20th Century, and he produced dozens of collections in his lifetime. This one is particularly interesting to me because, as far as I know, it’s his only collection of novellas.

Anderson was a terrific science fiction short story writer, and he was even better at length. Beyond the Beyond contains six long tales published between 1954-1967, including a story in his David Falkayn: Star Trader series, one in his Technic History, and two in his popular and long-running Psychotechnic League saga. These aren’t Anderson’s best-known stories, not by a long shot, but this is a decent snapshot of his work in the SF magazines during his most productive period in the 50s and 60s.

Beyond the Beyond was a paperback original, and was popular enough to enjoy multiple reprintings, including a hardcover edition from the Science Fiction Book Club in 1970, a UK reprint from Coronet (1973), and a mass market edition from Signet eight years after its original publication.

Beyond the Beyond makes a decent sampler of some of Anderson’s more popular series.

Tor paperback editions of the collected Psychotechnic League stories: The Psycho-Technic League (1981),
Cold Victory (1982), and Starship (1982). The most excellent covers are by Vincent DiFate

“Brake,” the tale of a starship crew defending their vessel from a pirate attack, and “The Sensitive Man,” a van Vogt-style superman spy thriller, are both part of Anderson’s popular Psychotechnic League series, which span… woof, I dunno. Like a zillion short stories and novels. The short fiction has been collected multiple times; in the early 80s by Tor (above), and then again in a trilogy of trade paperbacks from Baen just a few years ago. 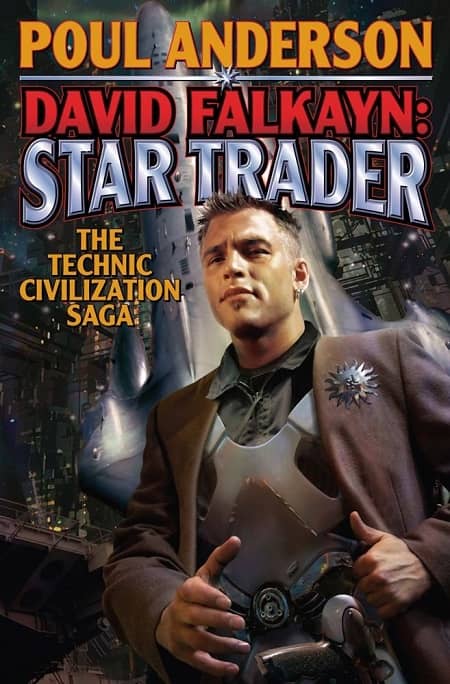 At his Poul Anderson Appreciation blog, Paul Shackley describes “The Moonrakers” quite succinctly:

Mars, colonized and terraformed, handles most Solar merchant shipping. The asteroids, colonized and hollowed out with barbaric opulence, have broken free from Mars, prey on Martian ships and sell to the Incorporated State on Earth.

The terraforming of Mars was financed by “the Great Swindle.” (p. 143) I will have to reread the rest of the story but what I remember from before is that this “Swindle” was never explained, thus, I thought, implying that this story is a sequel to another.

“The Moonrakers” is (probably) a loose sequel to “The Innocent at Large” (Galaxy, July 1958), the story of a Mars colony who use an innovative approach to raise the capital they need to terraform the planet.

My favorite review of “Starfog,” brief as it is, is this 1-line summary at Risingshadow.

Experience the terrible fiery Starfog, where the normal laws of Creation are suspended, and ships wander hopelessly for centuries.

Half of the stories in Beyond the Beyond were edited by John W. Campbell, and originally appeared in Astounding/Analog. (“Day of Burning,” from the January 1967 issue, was originally published as “Supernova.”) The rest appeared in Galaxy, Fantastic Universe, and Worlds of IF.

It’s a testament to Anderson’s enduring popularity among SF readers that he received the cover (or at least cover credit) for five of the six stories in this collection.

Beyond the Beyond was published by Signet in August 1969. It is 263 pages, priced at 75 cents. It has been out of print for 43 years, and there is no digital edition. The cover artist is unknown.

Our previous coverage of Poul Anderson includes many dozens of articles. You can find them here.

I’ve yet to read any Poul Anderson yet. But I have a copy of Going For Infinity. It doesn’t have any of the stories in Beyond the Beyond

Poul Anderson, a real favorite of mine, for a long time. I read Brake, Supernova and Starfog in those magazines, which I wish I still had (long story). I have many Anderson paperbacks as well as all of the NESFA volumes of his short work.

Also, John, inspired by your last post on getting old SF anthologies, I managed to score several on eBay just last month. I’ll be posting about them on my blog soon.

My monthly sf/f reading group is planning on Mr. Anderson’s The Broken Sword for our July book this year. Personally, I would like to drop The Earth Book of Stormgate on them (a collection of the Nicholas van Rijn/David Falkayn stories, which contains “Day of Burning”). But any Anderson is better than no Anderson.

I read The Broken Sword a year or two ago. A cup of hot black coffee – strong and dark.

What a writer. He could write anything: short stories, novellas, novels about anything from SF to Fantasy to the retelling of Norse myth. You can’t go wrong with Poul Anderson.

Mr. Parker: May I use your comment on The Broken Sword? Very apt.

> I’ve yet to read any Poul Anderson yet. But I have a copy of Going For Infinity.

I totally forgot about Going for Infinity! I think Tor sent me a review copy way back when it first came out in 2002, the year after Anderson died. 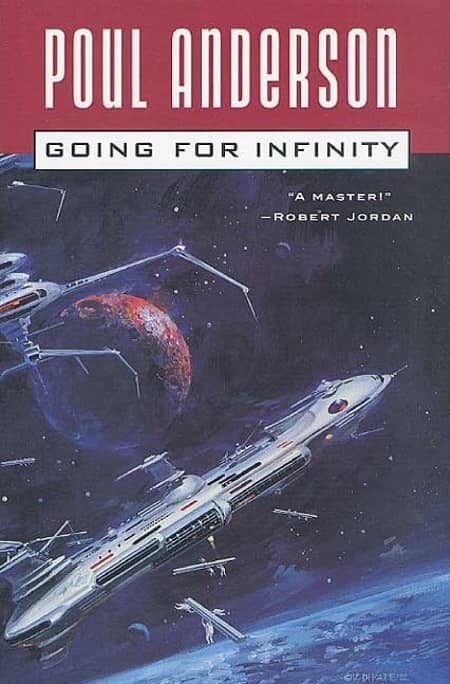 This is definitely a book worthy of its own Vintage Treasures post. It’s a nice solid anthology (416 pages), and it includes some substantial commentary from Anderson on the stories, and his contemporaries. Here’s an excerpt from the book description.

“Along with several Hugo and Nebula Award-winning stories, Anderson also shares autobiographical musings, and fond memories as he looks back at a lifetime spent crafting many of science fiction’s most memorable adventures. Between the short story and novel excerpts collected here, which range over the entire length of Anderson’s career, he reminisces about his experiences, including his encounters with such peers and colleagues as John W. Campbell, Anthony Boucher, “Gordy” Dickson, Jack Vance, Clifford Simak, and Harlan Ellison.”

Thanks for reminding me about this one, Glenn! I’ll have to see if I can find my copy, somewhere in the Cave of Wonders…

> I have many Anderson paperbacks as well as all of the NESFA volumes of his short work.

You know, that’s a good reminder that I still haven’t gotten around to getting the last two volumes, Door to Anywhere and Question and Answer. Those books look so nice on my shelves!

> Also, John, inspired by your last post on getting old SF anthologies, I managed to
> score several on eBay just last month. I’ll be posting about them on my blog soon.

I look forward to it! What were they?

Also — remind us of your blog, please!

> My monthly sf/f reading group is planning on Mr. Anderson’s The Broken Sword for our July book this year.

That book has been a favorite for discussion at Black Gate for years. If you don’t think it’s cheating, you can probably get a lot out of those articles, including:

Ryan Harvey on The Broken Sword

> I read The Broken Sword a year or two ago. A cup of hot black coffee – strong and dark.

> Mr. Parker: May I use your comment on The Broken Sword? Very apt.

John and all: the blog is http://www.tipthewink.net

Tomorrow’s post will be on the Scalzi Interdepencency trilogy just finished. Next Friday will be on an old anthology from the Fifties. I’m going to spread them out.

Mr. Boyle, go for it. Just turn the light out when you leave.

Aha! Mr. Parker has given me permission!

Maybe Netflix will pick up a copy of Beyond the Beyond as the next chapter in Love, Death + Robots.

Don’t get me going about what Netflix could do with the vast reservoir of classic SF/fantasy/horror.

This book includes one of my two favorite Poul Anderson stories, “Starfog”, which for me has tremendous sense of wonder, and that yearning near-tragic feeling that Anderson could evoke so well.

> Don’t get me going about what Netflix could do with the vast reservoir of classic SF/fantasy/horror.

What’s your top two picks for a Netflix adaptation?

> This book includes one of my two favorite Poul Anderson stories, “Starfog”,

What’s the other one?

> which for me has tremendous sense of wonder, and that yearning near-tragic feeling that Anderson could evoke so well.

That makes me think of “The Longest Voyage,” which ended tragically, and with similar emotions.

My other favorite Anderson story is “The Man Who Came Early”.

I would love to see some good classic Heinlein – I’ve always thought The Door into Summer could make a great film, and The Unpleasant Profession of Jonathan Hoag is so quirky and bizarre that in the right hands it might be brilliant.