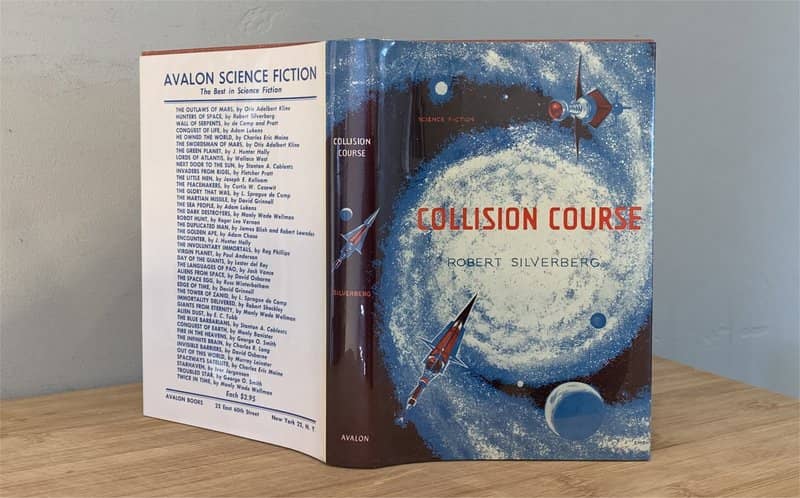 Robert Silverberg needs no introduction to readers of Black Gate, I should think — author, over six or seven decades, of dozens of novels and hundreds of short stories, editor of rows of reprint and original anthologies, winner of four Hugo Awards, five Nebula Awards, and numerous career awards including induction into the Science Fiction Hall of Fame, an SFWA Grand Master, and the First Fandom Hall of Fame — yet it’s easy to come across unfamiliar titles from along the twists and turns of his long and varied career. He began in the 1950s, a prolific author of short stories and of standard genre SF novels that he was able to write and sell quickly, and while some of them have been reprinted several times in decades since, this early body of work has been eclipse by the high quality work of the mid-1960s to the mid-1970s, for which he won many of those awards, and by later popular works such as his Majipoor novels and stories.

The novel at hand is one of those earlier works, and it’s interesting precisely because it’s not a major work of science fiction in any way.

Rather, it’s utterly typical of science fiction of its era in its presumptions and assumptions about the ways of the universe and the possibilities of human contact with alien races — ideas that have become clichés that have permanently settled into modern popular culture’s conception of science fiction, especially in Star Trek and Star Wars and all their permutations over the decades. That is, those franchises have frozen into popular culture the ideas of primitive science fiction of the 1940s and ‘50s (Trek) or 1930s and ‘40s (Wars) that literary science fiction, at least at its more ambitious, have surpassed and left behind. No one would write a novel with such a simplistic theme as this one’s today.

And why this average 1950s era SF novel and not some other? Mere serendipity. In early 2019 I attended an Antiquarian Book Fair that’s held annually in downtown Oakland. (This year’s fair was held in February.) I’ve been in dozens of SF convention dealers’ rooms over the decades, but never to an equivalent public event not restricted to genre books. It was indeed like a very high-end convention dealer’s room, a large corner of the downtown Oakland Marriott, divided into rows of booths with dealers from around the world. The two or three dealers specializing in science fiction were the equivalent of the best book dealers at the largest science fiction conventions, in terms of their range, quality, and price, while the balance of the fair consisted of dealers specializing in other genres or general books and selling rare items to the tune of several thousands, or tens of thousands, of dollars. Several books caught my eye, nothing essential, but determined to buy something, I found this Silverberg volume (which I had an earlier Ace edition of already), a fine crisp first edition, for only… $50. About the least you could pay to buy any book at the event. A few days later, I read the book in about 3 hours, and I’m not a fast reader. 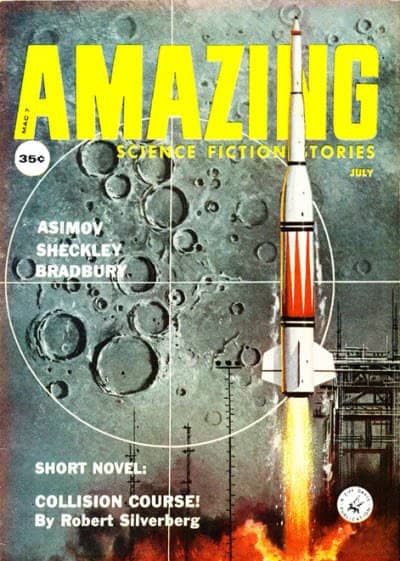 The story was first published as a “short novel” in Amazing Science Fiction Stories for July 1959, and was published (without expansion) in 1961, first in hardcover for Avalon and later in the year as half of an Ace Double. 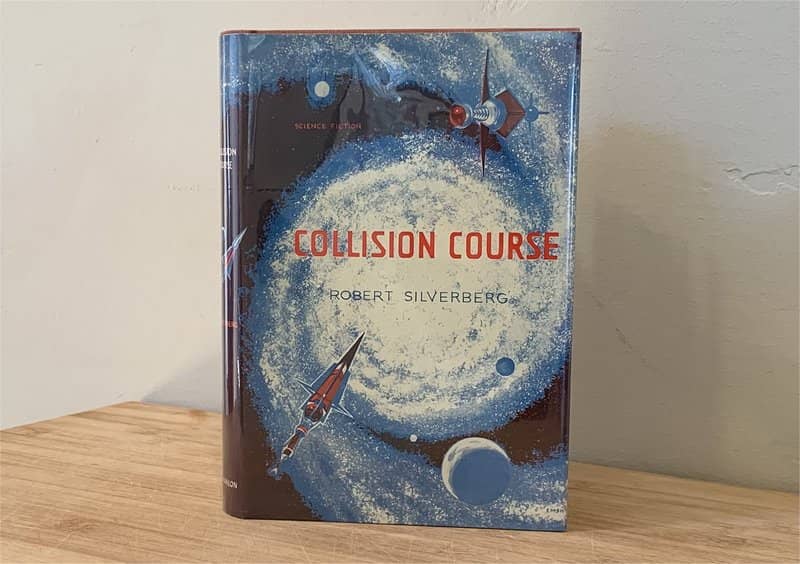 This reads like a mashup of several Trek episodes, with a bit of 2001 thrown in. (Because, of course Star Trek derived its premises from 1950s sf, and in 2001 Clarke used familiar ideas from his own earlier 1950s works.) 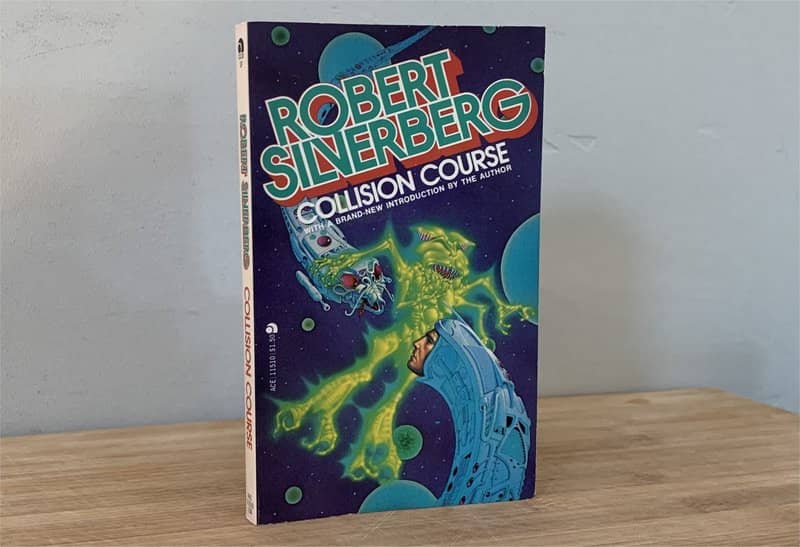 At the same time, the book is simplistic, even dimwitted, on a couple points. (This is not to impugn the author, so much as the assumptions of 1950s SF.)

This recognition that humanity isn’t the center of the universe, or its ultimate achievement — despite John W. Campbell — is the perspective and sense of wonder some of us come to science fiction for.

Mark R. Kelly’s last review for us was of City by Clifford D. Simak. Mark wrote short fiction reviews for Locus Magazine from 1987 to 2001, and is the founder of the Locus Online website, for which he won a Hugo Award in 2002. He established the Science Fiction Awards Database at sfadb.com. He is a retired aerospace software engineer who lived almost his entire life in Southern California, though in 2015 resettled in the Bay Area. Find more of his thoughts at Views from Crestmont Drive.

Fascinating review. COLLISION COURSE was the very first Silverberg novel I ever read, and one of the first SF novels period. I read it in 1977, when I was 13. I passed it around to my friends and we discussed it to death (as we did with all SF novels we shared).

I agree with you completely that it’s a very minor novel, and I knew that even at 13. And I think you really nailed the major problems with it — especially the huge naivety around mankind’s hubris. I suspect it would have had a bigger impact on (and was probably aimed at) Campbell’s SF readers who accepted the empire-building themes of 50s and 60s SF without question, but that piece still scored with me, even as a very young SF reader.

Of all of Silverberg’s novels, COLLISION COURSE has lingered in my mind the longest. I used to think it’s because it was the first (and because, naturally enough, we probably remember the novels we shared and enthusiastically discussed in our youth far longer than the ones we read in isolation as adults).

I enjoyed this book for the same reason I think the Star Trek episode “Arena” is superior to Fredric Brown’s source material. Kirk’s decision not to kill the Gorn (starkly contrasted with Bob Carson’s decision to kill the alien in Brown’s short story) is a powerfully redemptive moment.

Anyway, great job. Looking forward to the next one!

Interesting – like you say – how a lot of these ideas were reused in Star Trek. I laughed at the idea of two races carving up the entire universe between them. It reminded me of an old Irish TV sketch that was a riff on the traditional rivalry between Ireland’s two chief cities, Dublin and Cork. The cities have divided the universe between them but the Corkonians are still grumbling that Dublin got all the best bits (the milky way, etc). I guess hindsight is a wonderful thing. I remember coming across a headline in an Irish paper – from the Fifties – in which a senior Irish cleric warned how mankind was losing its moral and spiritual perspective in its quest to conquer space(!).

And funny (again, like you say) how races from very different parts of the galaxy are often so physically similar. I could understand the logic of this when it came to costumes for a TV series (STTNG was just as culpable as the original Star Trek, although it did ultimately come up with some sort of explanation in ‘The Chase’) – but in books?

Last year, I started a project to read all Robert Silverberg’s novels, short story collections, and anthologies in order starting with Revolt on Alpha C. (I’m skipping his erotica and his nonfiction… one has to draw the line somewhere!)

I have made it through 1958’s Invisible Barriers. Next up is Collision Course.