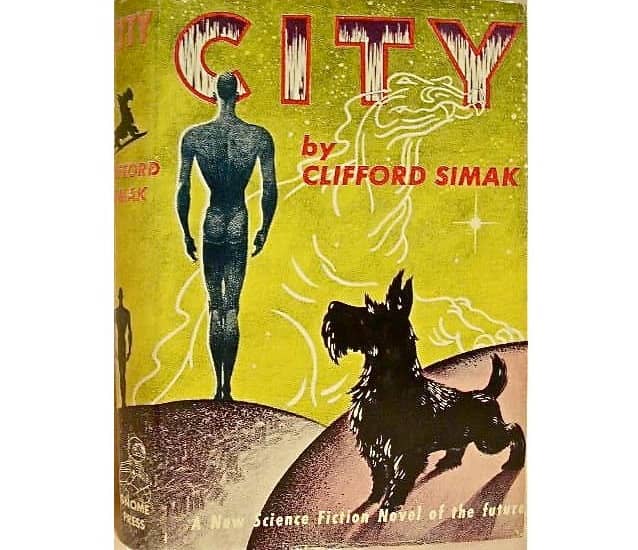 Clifford D. Simak was a Midwestern US newspaperman who wrote science fiction on the side, and published stories beginning in the 1930s in magazines like Wonder Stories until finding a home in John W. Campbell’s Astounding in the 1940s (and later Galaxy in the 1950s). City was his earliest significant work, published in 1952 but composed of stories published mostly in Astounding from 1944 onward. An enduring work, it won one of the very earliest awards for SF or fantasy, the International Fantasy Award, in 1953 (two years after Stewart’s Earth Abides, which I reviewed here in January, won the same award). It’s Simak’s most popular book along with his Way Station, published a decade later.

The book tells the future of humanity as it abandons cities for country estates and then moves off Earth to settle other planets, and in parallel the rise of an artificially created Dog civilization. By the end, humans have largely propagated outward to other planets, and Earth is left to the intelligent dog civilization, to whom these stories are myths.

This is a beautiful work that suffers from its origin as a group of separately written stories over seven years. The effect is a kitchen-sink fix-up novel in which each story develops a new concept, sometimes to solve the problem set up by the previous story, rather than an integrated work planned from the beginning. And it’s sentimental at times. But that Simak could take an initial premise, about the transformation of human civilization by technology, and extend it, again and again, with notions of bootlegging the intelligence of dogs (and ants), speculations about how the world is much vaster than the tiny portion humans have perceived, and how humanity might well give way to other species, is an impressive achievement.

The book consists of eight stories plus an (much later-written) epilogue. The framing sections in which dog scholars present these stories as myths were, of course, not present when the stories were first published, but were added in the book. The edition I’m reading, with pages references below, is this very handsome Old Earth Books hardcover edition of 2004. 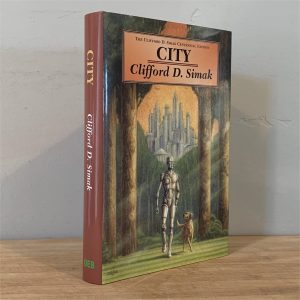 The first story, “City” (first published in Astounding May 1944), is set about 50 years in the future of Simak’s writing in 1944 or so, and it projects the development of several technologies — helicopters, planes, hydroponics, atomics—into a future in which cars are obsolete, cities are unnecessary “huddling places”, and most people have chosen to live out in the country (since transportation is so easy and economical). The story concerns the problem of unoccupied houses in the unnamed city where John J. Webster lives, and what to do with them.

Subsequent stories follow succeeding generations of the Webster family. The second, “Huddling Place” (Astounding July 1944), concerns Jerome A. Webster living comfortably on the Webster family estate surrounded by benevolent robot servants, as his son Thomas is about to head for Mars. (Were Simak’s robots influenced by Asimov’s? Not noticeably. Simak’s robots are elegant, serene servants; they would reappear in later works like the 1972 novel A Choice of Gods.) Jerome is uncomfortable leaving home even to see his son depart. When an urgent request comes for Jerome to journey to Mars himself, to treat Juwain, a Martian philosopher he once knew, he can’t bring himself to do even that. He understands that the condition of agoraphobia that has settled into the human instinct.

In the third story, “Census” (Astounding Sept. 1944) a World Committee has formed, planets in other star systems are being settled, and there is a hidden population of “ridge runners” who have chosen to live in the hills unaccounted for — extraordinary people like those in the past who’d become successful artists, politicians, or crooks. An enumerator (census taker), Richard Grant, visits the Websters in search of them, and meets their talking dog Nathaniel; the Websters have pursued the options of advancing dogs into a sentient species. Grant tracks rumors of a mysterious stranger in the woods, Joe, who has created an advanced ant civilization. Grant reveals he is searching for someone to finish a thesis by that Martian philosopher Juwain, one that might change mankind — and the dogs. But Joe, reading a fragment, sees an error and will not reveal it. He’s not interested.

The single most striking story is “Desertion” (Astounding Nov. 1944), set on Jupiter, in which men are transformed into creatures able to survive on its surface and explore. (The plan is, page 98b, “Man would take over Jupiter as he already had taken over the other smaller planets,” an expression of the manifest destiny common in 1940s and ‘50s SF.) A sixth man, Fowler, prepares for his expedition, knowing that the previous five never returned, and no one knows why, and this man takes his dog Towser. They are both transformed and sent out, and both overwhelmed by the experience, perceiving and understanding more than they ever could before. The man realizes they’re now using their brains fully: “Maybe the brains of Earth things naturally are slow and foggy. Maybe we are the morons of the universe…” Pages 107.7 And 108t: “perhaps because we were human beings… Poorly equipped for thinking, poorly equipped in certain senses that one has to have to know. Perhaps even lacking in certain senses that are necessary to true knowledge.” And they realize, they can’t go back. — Spoiler! — because, as expressed in the final lines,

“They would turn be back into a dog,” said Towser. 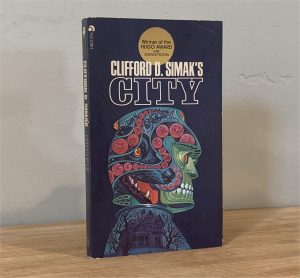 The next story, “Paradise” (Astounding June 1946) was first published a year and a half after the four previous stories, as if Simak thought a while before deciding to continue. It picks up where the last one left off. Fowler decides to return to the Jupiter compound and be transformed back into a man, so that he can explain his experience and thus why the earlier explorers never came back. He subsequently returns to Earth and his story spreads. Fowler meets the latest Webster, who worries that the news that Jupiter is a paradise could spell the end of humanity as it’s been, subverting its “destiny.” Joe is still around, revealing that he and the other mutants have stolen Juwain’s philosophy — which has to do with sensing the viewpoints of others, achieving complete understanding, a kind of “semantics.” The mutants don’t need it — they have telepathy — but humans do.

In “Hobbies” (Astounding Nov. 1946) Jon Webster exists in a world in which almost all humans have left Earth, and those left behind are too rich, and have nothing to do except pursue hobbies, like painting or creating elaborate cocktails, or writing the book he is writing. He returns to the family estate, where he learns about the “cobblies,” perhaps other dimensions or planes of access, that the dogs have learned about. The dogs are building a brotherhood of animals, “in a direction that man passed by without a second glance.” Webster realizes mankind has wasted its time, and returns to Geneva, where the last 5000 humans on Earth live, and seals the entire city off from the outside world — giving the dogs their chance.

In “Aesop” (Astounding Dec. 1947) a dog civilization has come into being, having all but forgotten humans, thinking of them generically as “websters” in lower case. They live by their Canons, which prohibit any destruction of life; animals don’t eat each other, they eat from feeding stations manned by mutant humans or robots. Jenkins, the head robot, is now 7000 years old. The dogs and robots decide the past doesn’t exist; each moment is a new world in a series of parallel realities. But they now face a world of overpopulation, since the animals don’t eat each other. The solution is the parallel worlds the mutants have accessed.

The final story, “The Simple Way” (published not in Astounding but in Fantastic Adventures Jan. 1951) brings Jenkins and Jon Webster together again, to solve the destiny of the ants, to whom the world is left. 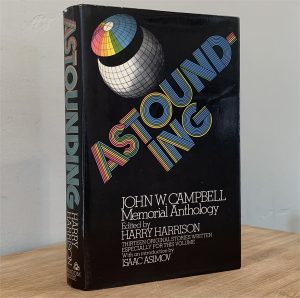 An “Epilog” written years later and so not in early editions of the book (it was written for Harry Harrison’s 1973 John W. Campbell memorial anthology Astounding published in 1973, shown above), tells of Jenkins on a world of mice and ants, as he discovers the ants are dead. A spaceship lands, with Andrew, a wild robot, who tells of other worlds: “There are worlds out there, and life on some of them. Even some intelligence. There is work to do.” And invites Jenkins to join them.

The memorable take-aways from this book are those sense-of-wonder moments that expand our ideas of humanity’s place in the universe. First, the suggestion that humanity might be succeeded by another sentient species that, ironically, comes to consider humans mythical. Science fiction reminds us not to take ourselves for granted. And second, however I might quibble with particular points, is that yearning for the transcendental experience, the appreciation of a higher reality we as humans can only suspect, that is an essential virtue of science fiction. The men and dogs find it on Jupiter. The dogs and their brotherhood of animals on Earth do. And in a whiff of tragedy, the men left behind on Earth, and who venture out to the planets, apparently do not.

An earlier version of this article originally appeared at Views from Crestmont Drive.

Mark R. Kelly’s last review for us was A Case of Conscience by James Blish. Mark wrote short fiction reviews for Locus Magazine from 1987 to 2001, and is the founder of the Locus Online website, for which he won a Hugo Award in 2002. He established the Science Fiction Awards Database at sfadb.com. He is a retired aerospace software engineer who’s lived almost his entire life in Southern California. Find more of his thoughts at Views from Crestmont Drive.