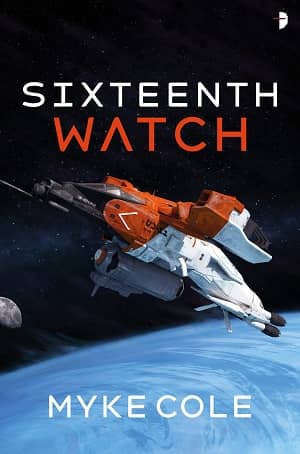 Myke Cole’s fourth short story sale was “Naktong Flow” (2009), which appeared in Black Gate 13 in Spring 2009. It was a terrific tale, and when I met Myke in person a few months later at the World Fantasy Convention, I urged him to send more fiction my way.

By then, however, he’d already moved on to better things. His first novel Control Point, the opening volume in the ultra-realistic military SF/superhero series Shadow Ops, was published in 2012; five more in the series followed in quick succession. His fantasy series The Sacred Throne became a trilogy last year with the arrival of The Killing Light.

His latest is near-future SF featuring a US Coast Guard team racing to prevent the first Lunar War. It’s already getting great reviews, including this one from SFX:

It’s incredibly refreshing to find a sci-fl novel with a female protagonist who’s a confident woman in her fifties… The author’s experience in the Coast Guard lends a strong sense of verisimilitude to his portrayal of military operations, and his action scenes sizzle with the rush of adrenaline… Briskly paced, the book strikes a fine balance between military minutiae and imagination.

The Coast Guard must prevent the first lunar war in history.

A lifelong Search-and-Rescuewoman, Coast Guard Captain Jane Oliver is ready for a peaceful retirement. But when tragedy strikes, Oliver loses her husband and her plans for the future, and finds herself thrust into a role she’s not prepared for. Suddenly at the helm of the Coast Guard’s elite SAR-1 lunar unit, Oliver is the only woman who can prevent the first lunar war in history, a conflict that will surely consume not only the moon, but earth as well.

Sixteenth Watch will be published by Angry Robot on March 10, 2020. It is 432 pages, priced at $14.99 in trade paperback and $9.99 in digital formats. The cover is by Isaac Hannaford. Read an excerpt at the Angry Robot website, and see all our recent coverage of the best upcoming SF & Fantasy here.