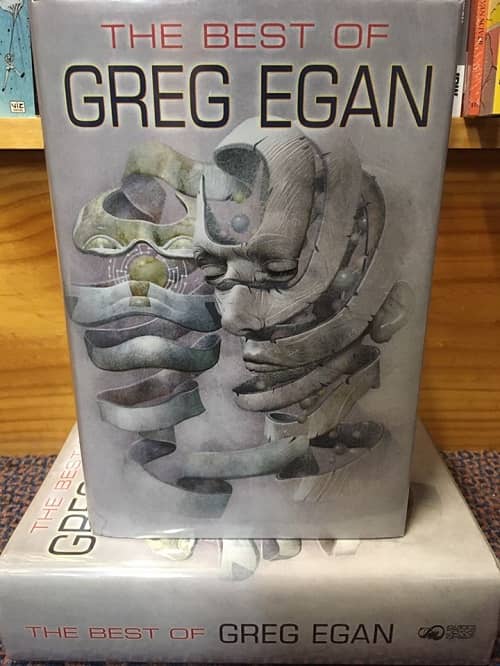 I attended Capricon, a friendly science fiction convention here in Chicago, last month. And as usual I spent much of my time wandering the Dealer’s Room, looking for bargains. As I often do I ended up at Greg Ketter’s Dreamhaven booth, where he had a bunch of discount paperbacks. (Yes, I needed a box to get back to my car.) But the most interesting purchase I made wasn’t a vintage Robert Silverberg or A.E. Van Vogt paperback, but a copy of The Best of Greg Egan, the new (and monstrously huge) retrospective collection from Subterranean Press.

I’ve read Egan almost exclusively at short length, and I’ve been very impressed (especially tales like “Reasons to be Cheerful,” the story of a man who slowly learns to reprogram his own personality after a near-fatal brain injury, which I read in Interzone), so this was a very easy decision to make. The collection has been well reviewed at Publishers Weekly (“Egan’s talent for creating well-drawn characters shines”), and Library Journal (“The author’s brand of hard sf is captivating, approachable, and not overly technical”), but the best review I’ve found is Russell Letson’s lengthy feature at Locus Online.

‘Unstable Orbits in the Space of Lies’’ lies somewhere between a Borgesian fable and an old Galaxy-style comic inferno: a literalized metaphor worked out with science-fictional rigor, as an epistemological hobo tries to maintain some independence of mind as he navigates an urban landscape that has been fractured by ‘‘attractors’’ into competing ideological precincts. The physical environment of ‘‘Into Darkness’’ is one of Egan’s topological puzzles, an intruding wormhole through which the narrator moves to rescue people trapped by its alien geometry and physical laws. The story framework is a tense and effective physical adventure, while at the same time the narrator recognizes the metaphorical properties of the space he is traversing.

As massive as this book is (it weighs in at 731 pages), it’s a relative bargain, priced at $45 in hardcover. 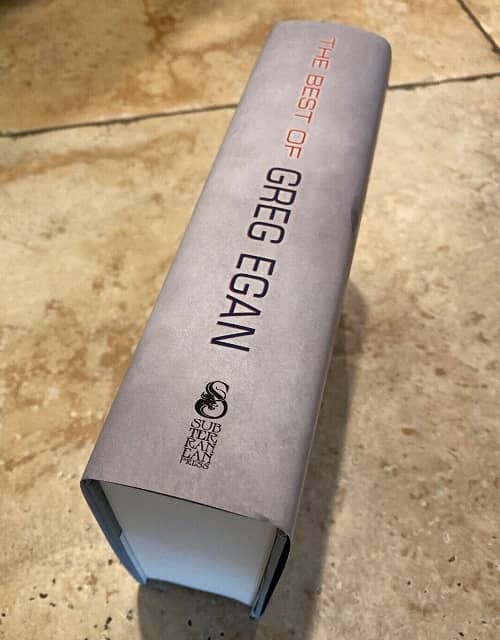 The Best of Greg Egan contains 20 stories, including five novellas (the Hugo and Locus Award-winning “Oceanic,” “Oracle,” “Singleton,” “3-adica,” and “Instantiation”), plus an Afterword by Egan. Here’s the complete table of contents.

The Best of Greg Egan was published by Subterranean Press in December 2019. It is 731 pages, priced at $45 in hardcover. The cover is by David Ho. As yet, there is no digital edition. Get the complete details at the Sub Press website.

My previous coverage of the treasures I found at Capricon includes:

Captured at Capricon: The Lucky Devil Series by Megan Mackie