I’m rather proud of the upcoming release of the book, Robert E. Howard Changed My Life, from the Rogue Blades Foundation (RBF), a non-profit publisher with a focus on all things heroic. I happen to be a board member of RBF, so my pride comes natural. However, a book title like that gets one to thinking. I can’t help but ask myself, as a writer and editor of fantasy fiction and as a member of the RBF board, how has Robert E. Howard changed my life? What has he meant to me over the years?

In the upcoming book, plenty of people better known and more experienced than myself will answer such questions, and I have to admit, for me these are not easy questions to answer.

I’ve read everything Robert E. Howard wrote, or at least everything that’s available to us today, including the formerly unpublished works and tidbits that have been printed in recent years. Back in the day I read nearly all the Howard-related comics from the 1970s. I’ve seen all the movies, even read the book by Novalyne Price, Howard’s one-time girlfriend. I’ve seen the TV shows, played the video games. I attended Howard Days two years ago and I’m planning another trip there this year.

Still, I feel like a phony, a Robert E. Howard phony. I feel like I can never read him enough, study him enough. It’s as if this man dead nearly a century is my teacher and I can never learn enough from him about the art and science of writing.

Yet I realize it’s not a competition. I realize there are lots of people out there who have studied Howard more than myself, and there are those who attend Howard Days every single year.

It’s funny, in a way. If you happen to have been raised in an evangelical church like myself, you will likely be familiar with more than a few individuals who can tell you the year, month, day, and possibly the very minute that they accepted their Lord and Savior. I’ve experienced something similar when I’m around other REH fans. Many of them can tell you the detailed circumstances of the first time they read Howard. One might say something like, “Oh, I first discovered ‘Red Nails’ back in 1963 in some old copies of Weird Tales I found in my parents’ attic.” Or someone else could recall, “I stumbled across ‘Beyond the Black River’ in an old paperback from the 1970s.”

I can’t do any of that. More than likely the first Howard-related material I would have read would have been a re-telling of one of the Conan short stories in a Marvel comic of the 1970s. Then of course I saw the Schwarzenegger movies in the 1980s. As for the very first time I would have read something Howard actually wrote, I really can’t say. I’m guessing it would have been about 1982 or 1983, just as I was coming into my teens. I was reading a lot of fantasy at that point, especially sword and sorcery from the likes of Michael Moorcock and Fritz Leiber.

As a child of the 1970s growing up in central Kentucky, my options for fantasy reading were quite limited (this would change by the mid-’80s thanks to Joseph-Beth Booksellers, but that was a ways off yet). I had access to Tolkien, and even to early Terry Brooks and some Anne McCaffrey. But that was it. Even Dungeons & Dragons wasn’t quite a thing yet in that neck of the woods. So, really, I had no access to sword and sorcery, or at least none of which the grade-school version of myself was aware. 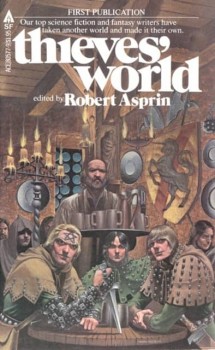 Then in 1980 a new paperback came to my local Waldenbooks. The cover featured three figures seated at a tavern table and a barkeep of sorts standing behind them, and these four were some of the roughest looking characters you ever did see. Across the top of this paperback were the words, “Thieves’ World.” Turns out this book was a collection of sword and sorcery stories all taking place within a seedy city known as Sanctuary. Also turns out this would be the first book in a series of more than a dozen, and that’s not including all the tie-in novels and gaming-related material to come in future decades.

Since that moment 40 years ago, I’ve read a lot more from the now-late Robert Asprin, and I’ve read a fair amount from John Brunner, and from other authors who appeared in that book. You might recognize some of them, authors with names like Lynn Abbey, Andrew Offutt, Marion Zimmer Bradley, Poul Anderson, and others.

But where does that leave me with Howard? Though he is often referred to as the father of sword and sorcery, he wasn’t necessarily that figure for me. I suppose he was something more like a grandfather, or perhaps an older uncle.

Still, the truth is that though I came to sword and sorcery through different authors, I have to admit Howard is still the best of them. His writing style brings together a hard boiled tone with an almost folksy cadence. He often combines a grim reality with a dark humor in a fashion that is undeniably his own.

Over the decades I have read more than a few great writers, some who were better than Howard in a number of qualities, but none of them were Howard. None could do what Howard could do. The closest I’ve come across are the handful of sword and sorcery short stories by author Steve Goble, though in recent years Goble has spent his time penning novels of piracy (and they’re quality novels, too, I might add).

How has Howard affected me? He’s made me a better writer. He’s made me want to be a better writer. He’s provided me a benchmark to reach for, one which I will never touch but to which I can aspire. Not only his writing style, but his personal work ethic, have pushed me like no other author has. Beyond my writing, his strengths (and to some extent even his weaknesses) have impressed upon me the importance of literature, especially heroic literature.

Which leads me back to the Rogue Blades Foundation.

We of the RBF are all about the heroic, and Howard offered plenty having to do with that subject. Not only is RBF producing the book, Robert E. Howard Changed My Life, but in the future this publisher is planning further works related to the heroic, all things heroic, some including fictional tales of mighty figures bringing justice to the world, but some works of non-fiction, allowing real people to bring forward their own words of what it means to be heroic.

Why is RBF doing this? Because the world needs heroes. We need examples of the best of us, examples of those who do the right thing, of men and women who are willing to sacrifice in order to make the world a better place.

And of course we hope to have a little fun along with the way with some fine tales of adventure.

Before I finish here, I also want to point out that you, the reader, can be a part of this, a part of heroism, a part of RBF. You can play a part in bringing to the world heroic literature and non-fiction that focuses upon the heroic.

How? First off, you could pre-order a copy of Robert E. Howard Changed My Life. Also, if you would like to spread notions of heroism, there are multiple ways you can donate to the Rogue Blades Foundation, including joining RBF’s Ring of Heroes. And there are plenty of other ways you can help RBF.

Together, all of us can not only continue the legacy of Robert E. Howard, but we can help bring heroics to the world.

First S&S is an interesting topic. I somehow stumbled on this website before i had ever read anything that is technically sword and sorcery.

R.A. Salvatore was my introduction to modern fantasy novels. That sent me to the internet to try and find people who were also fans.

After Blackgate i learned about S&S and Conan. I thought he was just a bland boring archetype.

Sometime in 2009 there was an older lady that i enjoyed talking to in a used bookstore. She gave me the first two Ace paperbacks for free that were beaten up and had no cover.

I read both of those and loved it. Only later figuring out about the Del Rey books and finding copies of those. (and my love of Kull)

Wow, Glenn, that’s a great story. You give me the idea for a series John could run: ‘How Black Gate Changed My Life’ 🙂

Thanks for commenting, Glenn. I wouldn’t be surprised if Salvatore hasn’t brought a lot of readers around to fantasy fiction. He doesn’t seem to get a lot of recognition in the more literary circles or even within some of the fantasy audience, but he’s written plenty of books and has been quite popular. Hmm, I haven’t read any Salvatore in a few years, so maybe it’s time.

I also came to Howard fairly late — I might’ve picked up a Conan comic or two in the 80s, and I definitely had the Red Sonja and Solomon Kane 1980s miniseries from Marvel, but I didn’t really start reading his prose until I was in college.

I’m pretty sure my first actual sword & sorcery would’ve been Michael Moorcock (Elric & Corum) and Fritz Leiber; and I was probably led to both of them by mentions in D&D rulebooks.