Gareth L. Powell’s Embers of War is a space opera that does everything right: it’s expansive in scope, but character-focused. It nods to genre tropes, but interrogates them too, considering the real-world ramifications of the lasting trauma of war. Oh, also: it has a great sentient starship. It quickly became a favorite of ours — not to mention the voters who handed it this year’s British Science Fiction Award for Best Novel — and our enthusiasm was not at all muted by the recent release of the just-as-good sequel Fleet of Knives.

Powell’s series is one of the more popular space operas on the market (and you all know how I feel about space opera). I was intrigued by the first two books immediately, but hesitant to jump in until the third one arrived. So this week I was delighted to receive a review copy of Light of Impossible Stars, the third installment in Embers of War, which formally goes on sale February 18 from Titan.

Back covers to Embers of War and Fleet of Knives

In her feature review at Locus Online Liz Bourke wrote:

Trouble Dog is a sentient spaceship. A warship created for violence and battle, she was nonethe­less disgusted by her role in the end of the war, and resigned her commission to join the House of Reclamation. The House of Reclamation is an organisation that performs search and rescue for ships missing or in distress, founded by a human following a model pioneered by a long-since dis­appeared alien species. Trouble Dog’s House of Reclamation captain is Sal Konstanz… When a civilian ship goes missing in disputed territory, Trouble Dog, with Konstanz and her tiny crew, find themselves the closest ves­sel able to carry out a rescue mission…

Together this motley group uncover something vast and strange, an alien mystery in the heart of an ancient artificial space object. Though it becomes increasingly uncertain whether any of them will survive, as they find themselves at the centre of a conflict that could restart the late war – or worse, ignite an even larger conflict.

Read the complete review here. Here’s an advance peek at the back cover of Light of Impossible Stars. 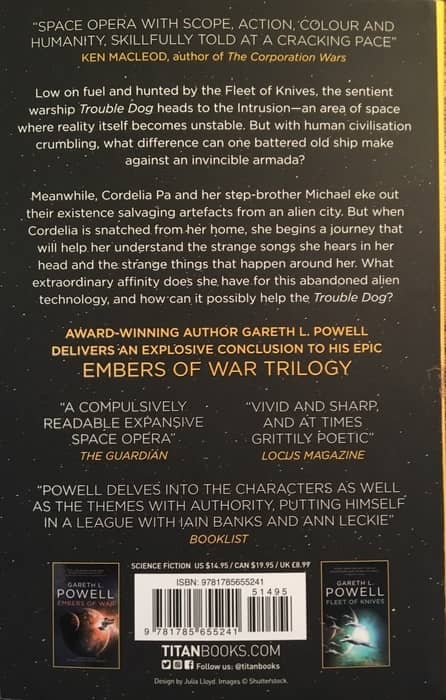 And here’s the publishing details for all three books.

All three were published by Titan Books, with covers by Julia Lloyd. You can try some brief excerpts here:

See all of our coverage of the best new science fiction and fantasy series here.