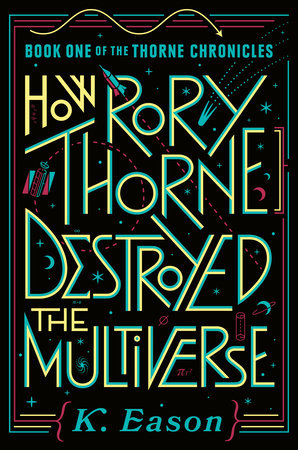 Young Adult fiction is populated with fast-paced novels that sweep readers into adventure from the very first page, only letting up when the final page reads The End. Their prose shows in gorgeous detail, transporting readers into whole new universes, rather than merely telling what’s going on. Novels that feature heroines begin when they are old enough to be the targets of romance; starting when they are younger not only provokes no interest, but also threatens to confuse booksellers, who must decide where to shelve them. According to many writing experts, passive voice must be scoured from the pages. The first chapter should be comprised exclusively of action; exposition kept to a minimum, and sentences clipped short. The author must avoid entire discursive paragraphs like, say, this one.

Eason’s How Rory Thorne Destroyed the Multiverse is marketed as a Young Adult Hardcover. But it violates these contemporary writing conventions.

We begin before Princess Rory Thorne is born. Indeed, while she is still in the womb. Our heroine, who will cause many kerfluffles throughout her childhood, creates her first by being born a girl, when everyone had planned for her to be a boy.

Shortly after Rory’s birth, thirteen fairies descend onto the palace for Rory’s Naming Ceremony, even though no one really believes in fairies anymore, and the only reason they were invited was as a nod to tradition, silly as it may be. But still, the thirteen fairies suddenly appear in the ballroom, coming from out of nowhere. The first eleven give Rory various gifts, some of which are obviously quite useless, like playing the harp.

The thirteenth fairy gives Rory the ability not just to tell when people are lying, but also to hear the truths they are covering up.

This skill comes in handy when Rory’s father is assassinated, her younger brother the Heir reveals his tyrannical character, and her mother ships her to an enemy galaxy to marry their idiot prince.

Normally, I try to write these reviews in the same attention-hooking, fast-paced manner as the original books are written. But K. Eason does not follow these conventions. The novel’s Kirkus review has called its narrator “Dickensian.” Eason’s style reminds me of literature written centuries ago in general, probably in the eighteenth or nineteenth centuries, when prose was slower and circumlocution was considered clever, perhaps even sly. Hence the style of this review, which tries to give you a sense of what you’d be in for. If you are looking to slow down, ponder circuitous passages, and even tolerate a fake academic reference or two, then you will probably enjoy this book. Since I wonder how many teenagers actually fall into this group, I suspect we adults are Eason’s more natural readers.

I enjoyed How Rory Thorne Destroyed the Multiverse a great deal. While the beginning reads like a retelling of Sleeping Beauty, the rest of the book is a campy space opera, complete with a plucky heroine and quirky supporting cast. The plot takes the reader on one highly entertaining caper after another. The world-building delights with original features like tesla lights (rather than LEDs), turings (rather than computers), and arithmancy (rather than hacking).

Daw Books released How Rory Thorne Destroyed the Multiverse on October 8, 2019. The editorial team and literary agent should be commended for tabling the industry’s shibboleths and expanding the genre’s possibilities with this book. K. Eason is also responsible for the On the Bones of Gods duology and various short stories. She teaches composition at the University of California, Irvine. The publisher lists the hardcover’s price as $26.00.

I am glad to report that more books are planned for this series, so – spoiler alert – Rory can’t destroy the multiverse too badly in this first volume. To read an excerpt and start learning how much damage she does achieve, please point your browse here.