Eleanor Arnason is the author of five novels, including The Sword Smith (1978), To the Resurrection Station (1986), Daughter of the Bear King (1987), and Ring of Swords (1993), plus dozens of short stories, chiefly in her Hwarhath series, SF tales of mankind’s interactions with the sole other species we find able to travel among the stars. But her most famous book is the first contact novel A Woman of the Iron People, which won both the inaugural James Tiptree Jr. Award in 1991, and the 1992 Mythopoeic Award. Publishers Weekly called it “excellent, anthropologically oriented SF… an intelligent, provocative book,” and at Tor.com Jo Walton wrote:

It’s definitely Arnason’s masterpiece and I love it. A Woman of the Iron People is anthropological science fiction, in the tradition of The Left Hand of Darkness and Mary Gentle’s Golden Witchbreed and Janet Kagan’s Hellspark. Lixia has come on a spaceship through cold sleep to a new planet, one that has aliens…. A Woman of the Iron People also won the Tiptree Award, and this is easier to understand without any parables, because it really is a book with a focus on gender. The aliens live separately — the women live in usually nomadic villages, raising children. The men leave at puberty and live alone, fighting each other. They mate with the women in the spring. These are their accepted customs and their biological imperatives, but we see several edge cases…

Lixia travels with Nia, and later with the Voice of the Waterfall, a male oracle, and Derek, another human anthropologist. They travel through culture and landscape, learning them both. It’s great that these future humans are also strange and also bring problems of their own to the story… Unlike almost all the other anthropological SF out there, the end of the journey and connecting up with the main expedition raises more questions than it solves, and there’s a twist at the end of the book that I thought was wonderful.

Read Jo’s complete review here. A Woman of the Iron People was published in hardcover in 1991 by William Morrow, and broken into two volumes for AvoNova’s paperback reprint a year later. Here’s the back covers for the paperback editions.

And here’s the single-volume hardcover edition. 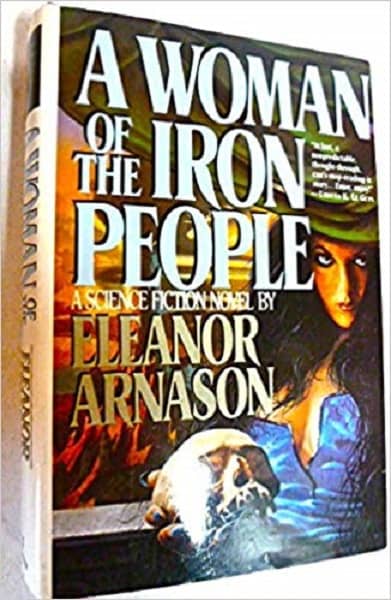 I bought the hardcover when it first came out, but when I discovered years later that AvoNova hired Gary Ruddell to so a second cover for the second paperback volume, I had to track those ones down as well. I’m glad I did; paperbacks have their own charm.

Here’s the publishing deets for the original hardcover: