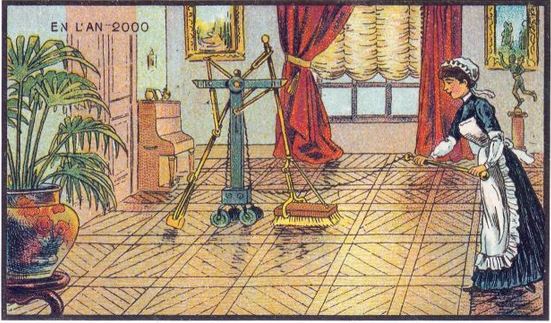 Launcher of a million cat videos, the Roomba automatic vacuum cleaner was a success from its release in 2002. The catchy name helped, and the even catchier company name, iRobot, solidified the the concept and category of the machine in the public’s mind. The firm was founded in 1990 by three, definitionally nerdy, MIT roboticists, Colin Angle, Helen Greiner and Rodney Brooks. Undoubtedly familiar with Isaac Asimov’s famed collection of robot stories – and probably frequent visitors to the MIT Science Fiction Society’s library in the student center, the world’s largest public open-shelf collection of science fiction – they plucked the name away from thousands of possible competitors, almost guaranteeing success. Admittedly, they wasted a decade on military robots, although the DoD might disagree with the verb, but their cute crawling bug now defines the category.

Although the Roomba is synonymous with “vacuuming robot,” like Apple’s iPad and iPhone, it wasn’t the first of its kind. Who anticipated it? Everybody, in fact and fiction. I’m not even going to mention images of robots pushing old-fashioned vacuum cleaners, but stick to purely automatic machines, anticipated in 1899 by the En L’an 2000 series by French artist Jean Marc Côté.

The 50s and 60s were, permit me, crawling with them as subliminal background – and sometimes foreground – images of the future in movies and television. Row 1: 1955: Sonic Broom, Science Fiction Theater; 1962: Autovac, The Jetson’s. Row 2: 1966: Automatic Floor Cleaner, The Glass Bottom Boat; 1968: Little Dragon Carpet Sweeper, Chitty-Chitty-Bang-Bang.

The design varies as appropriate to their past or future settings but form follows function: the device must be small enough to be unobtrusive, with a wide flat base forming a close seal with the carpet. Even Dick van Dyke’s steampunk Edwardian-era machine conforms if you think only about the front sweeper. 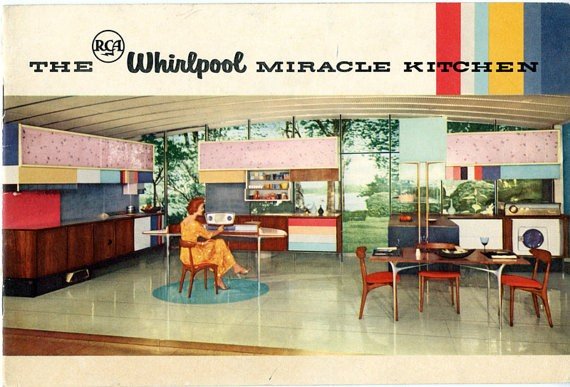 Everything would be automatic, every function would move to accommodate your needs. A St. Louis columnist, William Happ, described the housewife’s dream of the future.

Coming to the home before very long will be an automatic server on wheels which glides out of a kitchen cabinet laden with dishes of food, propels itself over to the dining room table, and then, after a wave of the hand, returns to its nesting place in the kitchen ‘til you’re ready for it to come out for another chore. …

And that’s not all. On its way toward reality from the company’s laboratory is its version of a new automatic floorscrubber, which also pops out of a wall cabinet by remote control, functions by itself, and then returns to its nook to clean itself and be ready for the next job.

This is called the “mechanical maid.” 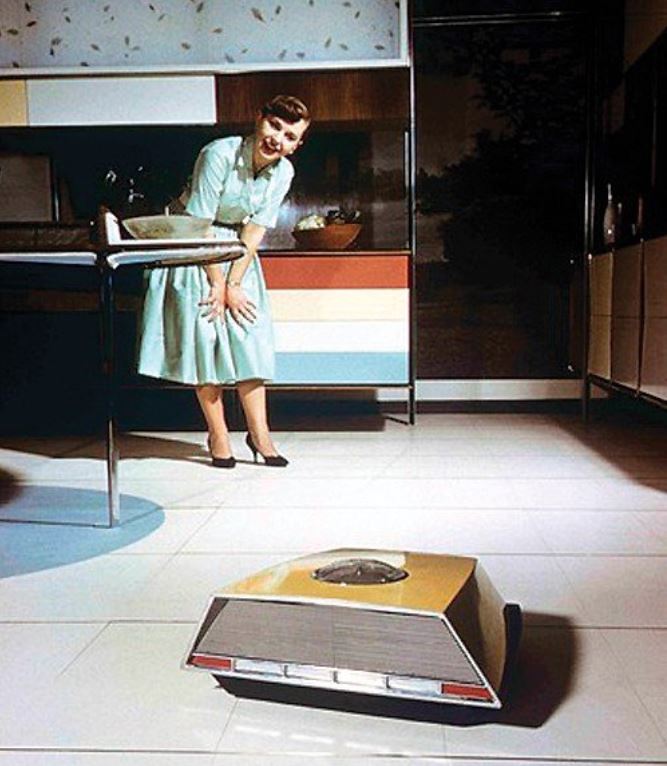 The mechanical maid sounded great in theory. But even a mere man had to wonder about its practicality.

What we’d like to know, is whether and how this machine is going to scrub the sharp angle corners of the kitchen floor without splashing sudsy water against the floor tile or the cabinet base.

Whirlpool released a promotional film for the Miracle Kitchen, though one in black and white, diminishing both the gorgeous hues of the decor and the changeable lighting for day and night. The mechanical maid is shown buzzing around the center dining table. Not shown is the operator working a remote control onscreen: they never got the “maid” to work by itself.

As if to prove that the concept is everything, Nintendo released its Chiritori in 1979. The Chiritori – dustpan in Japanese – is a toy version of a thing that didn’t yet exist, no matter that it appears to be an imitation Roomba. A radio controller with an antenna sent a signal to the antenna on the tiny 6″ disk, inside of which was a small fan that sucked up dust. It worked, technically, though you could spend a lifetime on cleaning a room if that was your intent. Nobody then or later seemed to know what purpose it served, so today it is one of the rarest Nintendo games, assuming that a toy vacuum cleaner is a game.

Tomy, another Japanese toy company, made a series of bots in the 1980s, one of which was patterned after the Chiritori. The Dustbot appeared in a million guises, and posed, cutely, with a totally useless broom and dustpan. 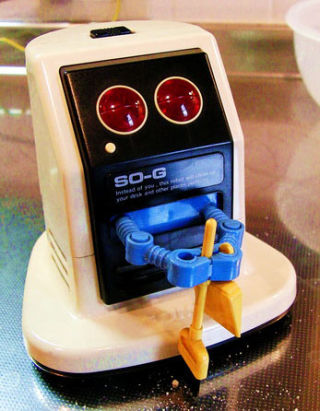 As a toy, you weren’t supposed to sweep your bedroom with the Dustbot, although it could pick up small bits of paper and stuff. What made it fun was its ability to sense edges and turn away from them. Littering a desk top with confetti would provide hours of fun as the bot sped to an edge, stopped, backed off, and hied away, leaving an empty trail behind, then got hidden in a closet forever.

Back in the real world, Frank Jenkins of JRL Consulting wrote a paper appearing in an AAAI Technical Report entitled “Practical Requirements for a Domestic Vacuum-Cleaning Robot.” In that same year of 1993, he constructed a prototype called the HomeR Hoover that looked like a stripped-down Dalek. Containing a Black and Decker hand vac and able to find its way back to its charging station, the HomeR was the most advanced autonomous vacuum to date. 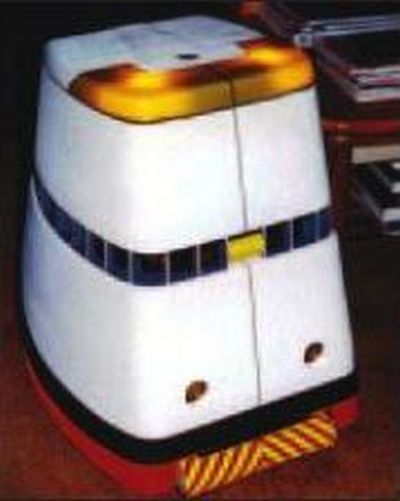 HomeR never made it to market, and it’s not clear if Televac did either, although Popular Science featured a photo of the French device in its October 1992 issue. 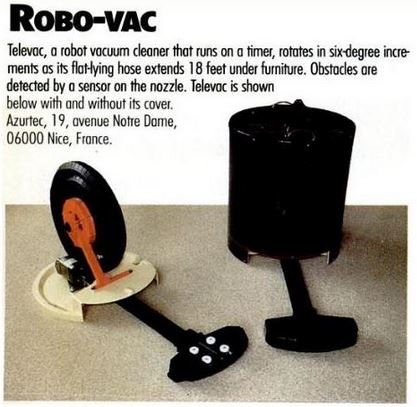 Indubitably, the honor for first commercial autonomous vacuum goes to Sweden’s Electrolux. The firm debuted its Trilobite prototype on a BBC science program in 1997 and started marketing it to the public in 2001, a year before iRobot got there, copying the design to within an inch of trademark violation. (Dyson also announced its DC06 vacuum in 2001, but the big, overbuilt, and clunky machine wasn’t released to the public until 2004 and quickly disappeared.)

The name Trilobite came “from the hard-shelled sea creature from the Paleozoic era (between 250 to 560 million years ago) that roamed the ocean floor during, feeding on particles and small animals. Sound familiar?” Uh, no, not to most people. Roomba was a thousand percent better as a name. The technical department more than made up for the deficiencies in marketing, as this description from a product brochure for version 2.0 proves:

The round, red Trilobite uses ultrasound technology to see obstacles and avoid them. Much like a bat, which emits a high-pitched sound to create a personal sonar reading of its landscape, the Trilobite pings 60,000 Hz ultrasound vibrations at surfaces to create a map of the room and remember it for future assignments. This computer processing power is what raises the Trilobite’s profile over the competition, whose vacuuming robots can only react to a situation (such as bumping into something) and cannot store data into memory.

Start the Trilobite by pressing the power button and answering yes to the question, “Start cleaning?” that appears on its LCD screen. The Trilobite then moves to the nearest wall, following along the edges of the room to create an inner picture of the room. This wall phase (the Normal mode of operation) forms the basis for calculation of the time required for cleaning of the open spaces that follows. The sonar detects any obstacles–blocks left on the floor, chair legs, a dog’s water bowl–and a new path is quickly calculated. Transition between hard floors and carpet takes place effortlessly.

An infrared sensor detects changes in elevation of four inches and greater to help it avoid falling down stairs. It also comes with special magnetic strips that can be placed in doorways, other openings, or elevation changes less than 4 inches to provide boundaries. The Trilobite can analyze and solve problems it encounters. For instance, if the unit vacuums up a sock left on the floor which stalls the brushroll, the unit will stop, reverse its brushroll to expel the obstruction and then continue with its task once the brushroll is once again operating freely.

It carries two nickel-metal hydride batteries (NiMH) batteries on board, switching to the second as the first runs low on energy. As the second battery’s power dips below the 50% point, the unit will cease vacuuming, return to its docking station, charge for about two hours, and return to the point where it ceased vacuuming to complete the task. The recharging dock fits along the base of any wall within 6 feet of a power outlet.

The Trilobite cost about $1,000 more than the Roomba, too much for the home market. Customers also complained that the wall sensors kept it too far away and that it worked so efficiently it went through filters like potato chips. Nor could it be programmed to work on a timer like the Roomba Scheduler. Some people preferred the superior cleaning, of course, but the Trilobite was always an also-ran.

Today Roomba is still the market leader over numerous competitors with names like Eufy, Roborock, iLife, Ecovacs, bObsweep, Shark, and my favorite, Neato. Over time, their prices lowered to well under $500 for performance far better than the Miracle Kitchen could have imagined. Or iMagined.

Robots are here to stay. They just don’t look like people. Like flying cars and food pills, that was a fantasy future we’ve surpassed for the better.

Steve Carper writes for The Digest Enthusiast; his story “Pity the Poor Dybbuk” appeared in Black Gate 2. His website is flyingcarsandfoodpills.com. His last article for us was Silas P. Cornu’s Dry Calculator His epic history of robots, Robots in American Popular Culture, is finally available wherever books can be ordered over the internet. Visit his companion site RobotsinAmericanPopularCulture.com for much more on robots.

I just found your website – one of my new favourites! Great stuff!