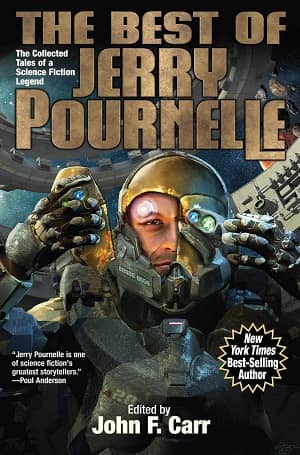 Jerry Pournelle was the author of the Falkenberg’s Legion series, including one of my favorite military SF novels, West of Honor (1976), as well as Janissaries, and dozens of other novels. He’s perhaps best remembered for his bestselling collaborations with Larry Niven, including The Mote in God’s Eye (1974), Lucifer’s Hammer (1977), and Footfall (1985), which contains a barely-disguised Robert A. Heinlein as a character. He died in 2017.

Pournelle was a controversial figure in SF. He was one of the writers who paid to have a pro-Vietnam War proclamation in Galaxy Science Fiction in 1968, and he described his politics as “somewhere to the right of Genghis Khan.” His novels, like The Legacy of Heorot (1987, written with Steven Barnes and Larry Niven) contain heroes who stroke their rifle lovingly, noting that they’ve never cared for a woman as much as they care for their guns. They contain lines that will make you drop the book on your foot.

Still, he was a tireless editor and short story writer. His anthologies include 2020 Vision (1974), a book that looked 46 years into the future, at the distant year 2020; Black Holes (1978), still one of the best introductions to the enigma of black holes in SF; the long-running Far Frontiers series (seven volumes, edited with Jim Baen), and ten volumes of a gonzo series that looked forward to future conflicts with near-sexual desire, There Will Be War (1983-2015).

Pournelle is not for everyone. Obviously. But he did produce some fine short fiction, much of it still worth a look today. Baen Books will release The Best of Jerry Pournelle next week, a fat 576-page collection gathering 15 stories — including a 162-page novella previously only available as an e-book, The Secret of Black Ship Island (2012, written with his long-time collaborators Steven Barnes & Larry Niven), and two previously unpublished stories.

It also contains some of Pournelle’s non-fiction (the preface to There Will be War, Volume I), and tributes by Larry King, David Gerrold, Larry Niven, Steven Barnes, and Robert Gleason.

Here’s the description, and the complete Table of Contents.

SHORT STORIES BY A MASTER OF SCIENCE FICTION!

Includes over a dozen stories by SF legend Jerry Pournelle, and remembrances by Pournelle collaborators and admirers.

For the better part of five decades, Jerry Pournelle’s name has been synonymous with hard-hitting science fiction. His Falkenberg’s Legion stories and Janissaries series helped define the military sf genre, as did his work as editor on the There Will Be War series of anthologies. With frequent collaborator Larry Niven, he co-wrote the genre-defining first contact novel The Mote in God’s Eye, which was praised by Robert A. Heinlein as “possibly the greatest science fiction novel I have ever read.”

Now, for the first time, all of Pournelle’s best short work has been collected in a single volume. Herein you will find over a dozen short stories, each with a new introduction by editor and longtime Pournelle assistant John F. Carr, as well as essays and remembrances by Pournelle collaborators and admirers.

Are the days of the full-time novelist numbered? by Jerry Pournelle (2010)
The Golden Age of Science Fiction: The 1973 John W. Campbell Award for Best New Writer: Jerry Pournelle by Rich Horton (2019)
The Government We Take into Space: Imperial Stars, edited by Jerry Pournelle and John F. Carr by John O’Neill (2019)

The Best of Jerry Pournelle will be published by Baen Books on November 5, 2019. It is 576 pages, priced at $16 in trade paperback and $8.99 in digital formats. The cover is by Stephen Hickman. Read the introduction and the first few stories at the Baen website.

See all our coverage of the best upcoming science fiction and fantasy here.

Hmm, I have mixed thoughts on this collection. I’d rather just have his short stories without the analytical matter.

I’m looking forward to this release. That looks like a nice selection of Dr. Pournelle’s work and for some reason I’ve never read The Secret of Black Ship Island.

Thanks for the heads up!

> Hmm, I have mixed thoughts on this collection. I’d rather just have his short stories without the analytical matter.

Why is that? Pournelle was a fine non-fiction writer — his intro to BLACK HOLES made me feel like I understood what a black hole really was for the first time — and with a collection as important as this one, I think it helps to have a few of his contemporaries and collaborators reflect on his impact on the industry (and share funny stories and anecdotes, which are always appreciated.) When done well, it can help put his entire career in perspective.

> Thanks for the heads up!

You’re very welcome, John. I’ve never even heard of The Secret of Black Ship Island, so you’re not alone. It’s apparently set between the events of The Legacy of Heorot and Beowulf’s Children. Here’s a little more info about it: