My chores haven’t abated in the last year, so I’ve continued burning through podcasts. After a lot of wandering on my part, two offerings from Rusty Quill hooked me on their first episodes and have kept me on the line. One is horror, the other humor.

The Magnus Archives kicks off with the Magnus Institute’s new head archivist, Jonathan Sims, trying to bring some semblance of organization to the Institute’s archive. Going back 200 years, it consists of reports and statements about possible supernatural encounters. In the process of updating the archive, Jonathan discovers that some old statements resist any form of preservation except being read into an audio tape. New statements are also usually collected by audio tape. These recordings provide the framing story for the weekly podcast.

The first episode, “Angler Fish,” was exactly what I hoped and expected from that title, and all I knew going in was that this was horror audio fiction. (And, no, that episode does not take place in the water.) As much as I try to avoid even the appearance of using puns, there’s no better way to say it than I was well and truly hooked.

The worldbuilding and story arcs for this podcast are tight, so to avoid spoiling too much, I’ll only say that outside our reality there are entities associated with our common fears, and they like to push their way into our world.

Each season of 40 episodes has an overall arc. They’re approaching the end of season 4, and there have been five seasons planned from the beginning. (I marathoned the first three seasons before catching up.) 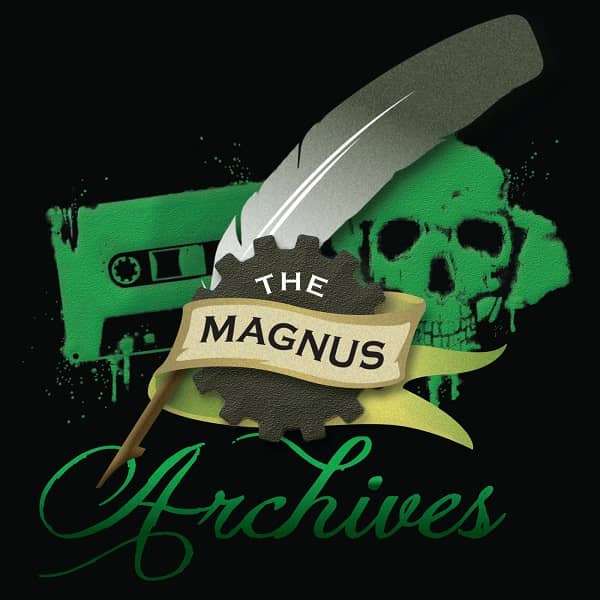 The podcast is soundscaped, but with a light touch — nothing in the background for most of an episode, with music creeping in only when the tension starts to mount. I avoid music when using earbuds, but their soundscaping hasn’t been a problem. However, there have been three or four screams that hurt. This hasn’t happened in quite a while, so hopefully they’ve learned not to do that.

During high-action episodes, the audio recording is often is segments, which can get a little choppy. However, this podcast may be unique in that it has caused the back of my neck to tingle. Twice. I haven’t listened to very many horror podcasts, but that’s not happened before.

And now for something completely different: Stellar Firma, a semi-improvisational podcast following the workday of planetary designer Trexel Geistman, who works for Stellar Firma Ltd., and his latest clone assistant, David 7, who is owned by Stellar Firma Ltd.

Every shift Trexel and David are required to design a new world for Stellar Firma clients, with requirements (submitted by listeners) varying widely on the scale from strange to bizarre to silly. (That’s a scale, right?) Trexel knows beyond a shadow of a doubt that he is a genius and that all his work is golden, so he usually wanders in with 20-25 minutes left on the clock.

If they don’t meet the daily deadline, David will be recycled.

Every five episodes their supervisor shows up to review their most recent planets. If she’s not happy, she’ll probably put her feet in Trexel’s mouth. Also, David will be recycled.

Poor David. Davids. A couple of recent special post-season-one episodes contained the exit interviews for the previous Davids. For one, it was his first meeting with Trexel, who, convinced his failures had to be the fault of his clones, had never shown up to work with this one. Since they still failed in their job, and only the clone was on the job, this proved it had to be the clone’s fault. A-ha! Genius strikes again!

Clones are not authorized to access the daily brief.

Poor David. Nor is David the first series of clones Trexel worked with. I believe David 7 is his 765th clone assistant. David 7, however, seems a little more cunning than most. Too cunning for his own good, one might say, if the average life expectancy for one of Trexel’s assistants wasn’t already less than a week.

Jeff’s last article for us was Gaming on the High Seas.