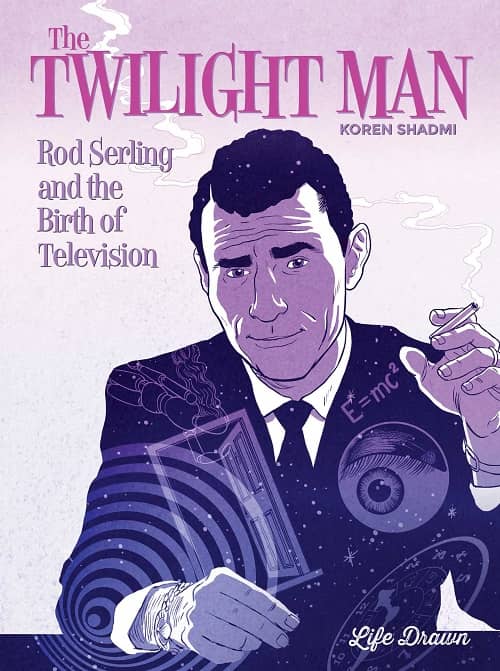 Rod Serling is famously the creator and voice for The Twilight Zone, but as I recently discovered in a new graphic novel by Koren Shadmi, Serling was an influential creator at the dawn of the television age. Courtesy of Humanoids Press, I got an advanced copy of Twilight Man: Rod Serling and the Birth of Television, a graphic novel biography of Rod Serling. The publisher description reads:

We recognize him as our sharply dressed, cigarette-smoking tour guide of The Twilight Zone, but the entertainment business once regarded him as the “Angry Young Man” of Television. Before he became the revered master of science fiction, Rod Serling was a just a writer who had to fight to make his voice heard. He vehemently challenged the networks and viewership alike to expand their minds and standards — rejecting notions of censorship, racism and war. But it wasn’t until he began to write about real-world enemies in the guise of aliens and monsters that people lent their ears. In doing so, he pushed the television industry to the edge of glory, and himself to the edge of sanity. Rod operated in a dimension beyond that of contemporary society, making him both a revolutionary and an outsider.

I’ve got some exclusive excerpt pages to show you below, and some examples of the depiction of Serling’s military time. 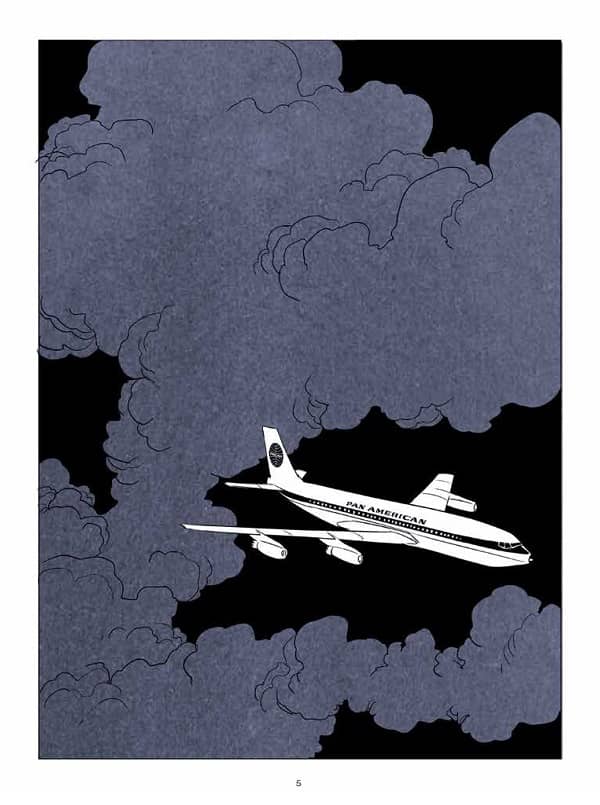 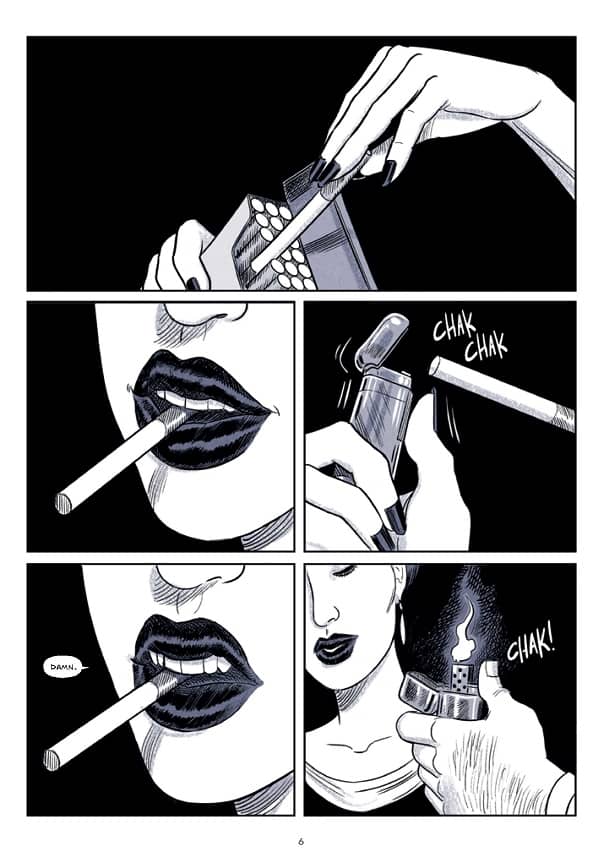 Koren Shadmi is the Brooklyn-based illustrator and cartoonist behind Twilight Man. He’s created half-a-dozen acclaimed graphic novels, including Rise of The Dungeon Master: Gary Gygax and The Creation of D&D. I got a chance to interview Koren.

First of all, thanks for making this graphic novel, Koren. I really enjoyed it. The black and white visuals, the period environments, the quirky expressions that I remember from Serling’s original Twilight Zone run all felt very authentic. And the spooky opening on the timeless flight gave the whole story a feeling of impending disaster.

Thank you, Derek! I really put in my best effort on this book to try and have it as loyal to the spirit of Serling himself and his work. 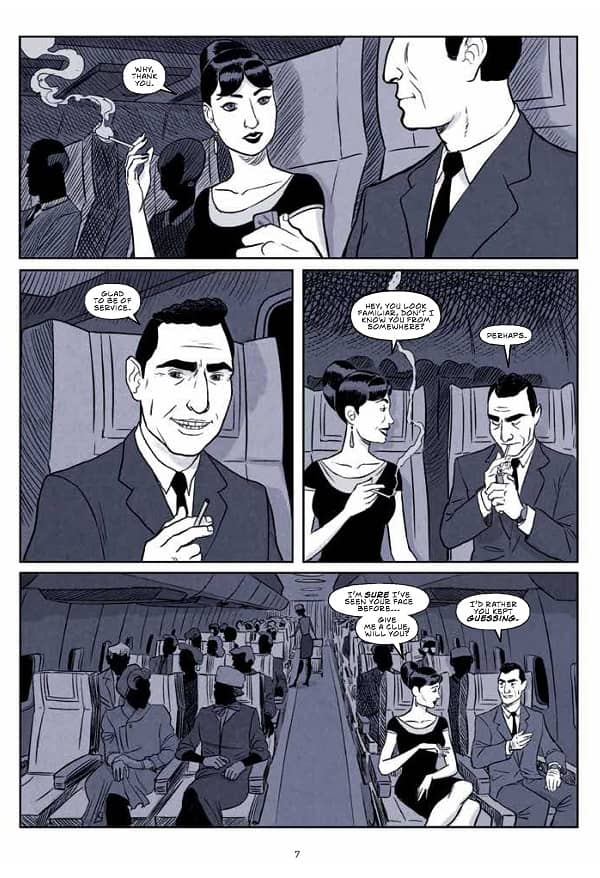 I was surprised that Serling had been considered a sought-after artistic writer. I had no idea he’d done so many works of serious drama. Was this a surprise to you too? If not, what did surprise you in researching for this biography?

It was a surprise. I was not aware of how important he was during the early days of television; he was really one of the most respected television writers of the era and had an almost overnight success story. Serling, along with writers like Gore Vidal and Paddy Chayefsky, tried to bring a literary quality to the works that they were writing for television. Serling wrote his teleplays as if they were a quality dramas set for the Broadway stage. 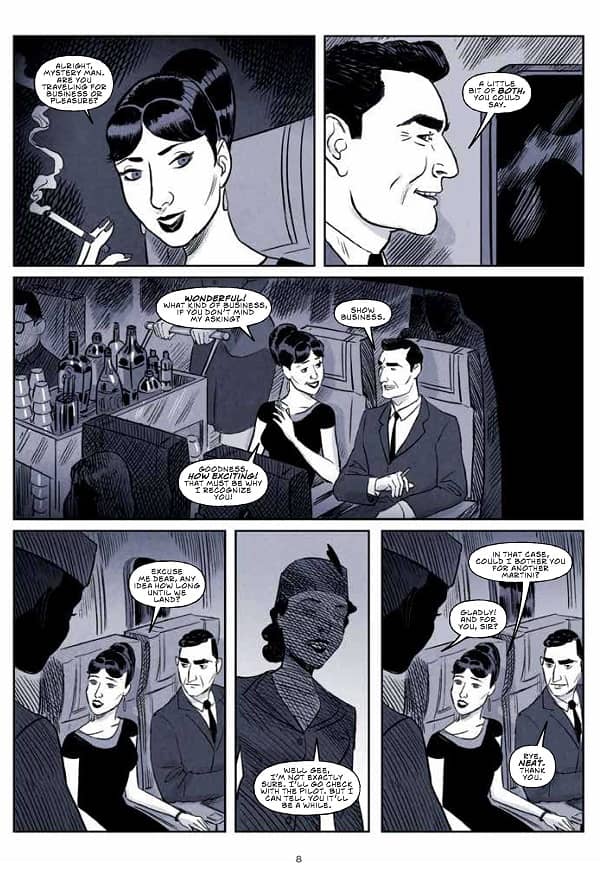 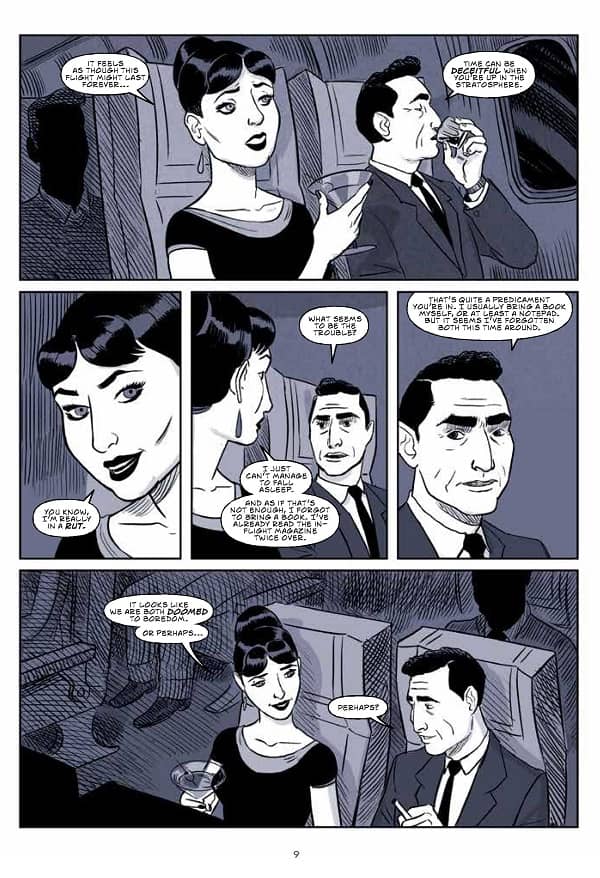 You were quoted as saying: “In my late twenties, when I was first exposed to the original Twilight Zone, I felt a strong connection to the themes and visuals.” Could you talk about the themes and visuals that resonated with you? Was it the darkness or the social commentary or the brevity and simplicity of the art at that time, or something else?

There’s a lot of elements I connected with. The visuals, for one: these stark lonely images steeped in atmosphere. If you look at episodes like ‘Time Enough At Last’ – this view of the world after an atomic apocalypse, it’s pretty simple but so effective. There’s also something about the black and white film stock that gives the show an additional glow. The story lines are set in the science fiction realm but deal with actual human emotions and problems. There’s a lot of anxiety, fear, and horror. 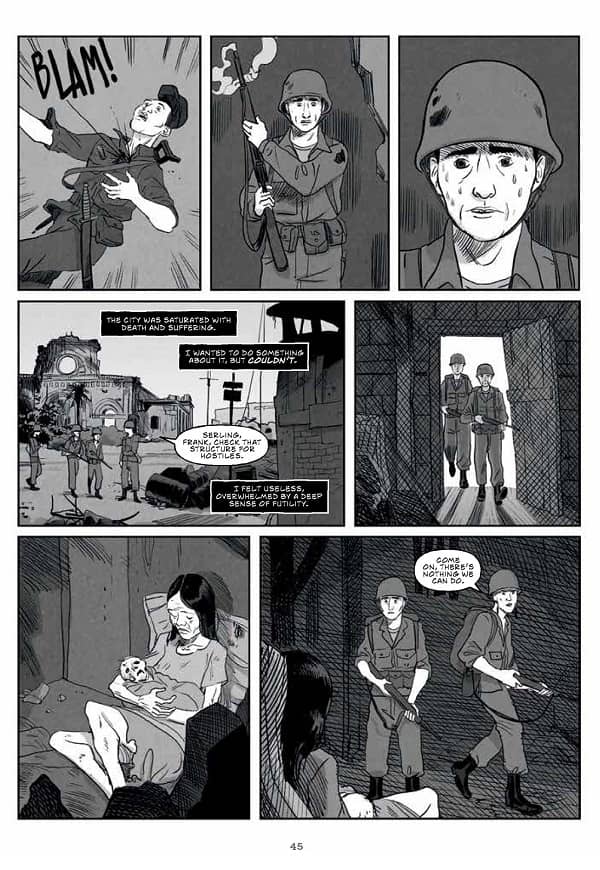 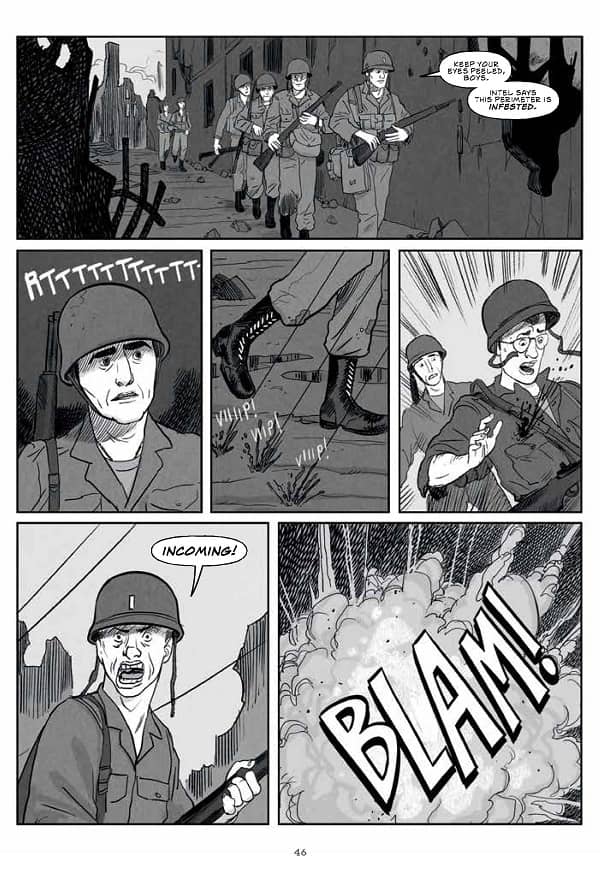 It felt to me like your pages communicated a deep affection for a creator and artist who died long before you were born. I felt some of his on-screen charm in the pages. What was it about his life—as a soldier, as a sufferer of PTSD, as a creator both successful and conflicted—that made you connect so strongly with Serling?

It seems to me that Serling was a very warm and personable guy, if you met him, but dealt with a lot of inner demons due to his PTSD from war. So he’s a very conflicted and contradictory figure. Again, I didn’t meet him or know him, so I’m just deducing from what I read, but he seemed to have a lot of inner conflicts—for instance, being this young hotshot writer who was blazingly successful but also felt very insecure about his work and always had a chip on his shoulder for not being ‘a real writer.’ I think he always had to defend the medium of television as worthy and respectable, and it made him unsure of himself. 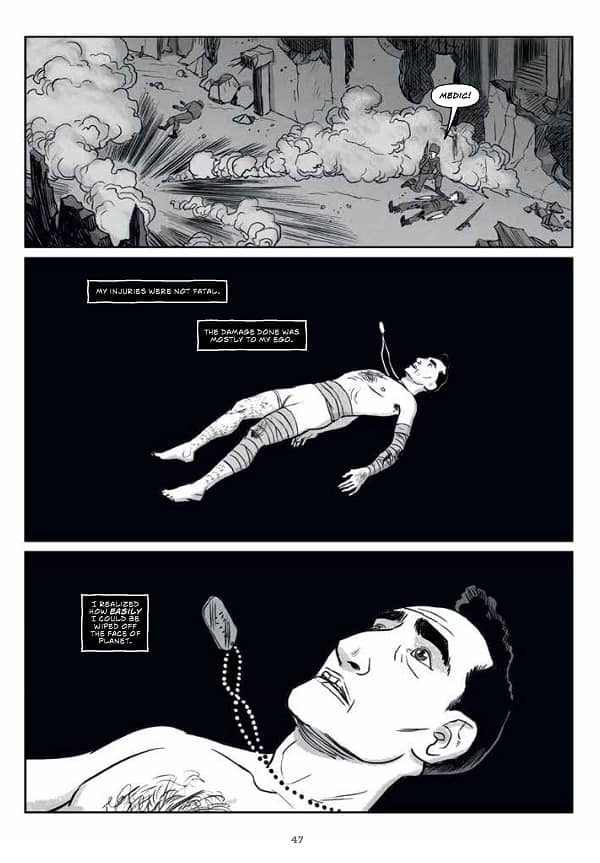 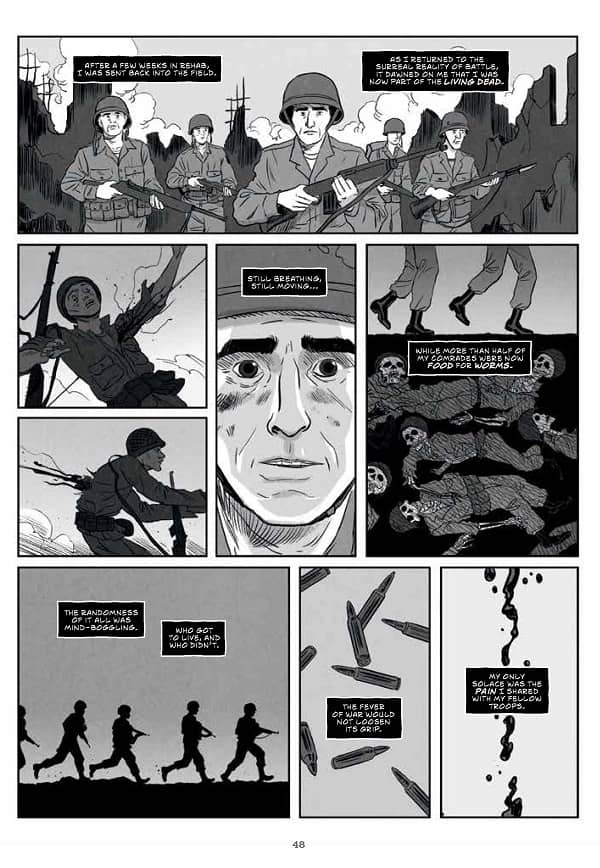 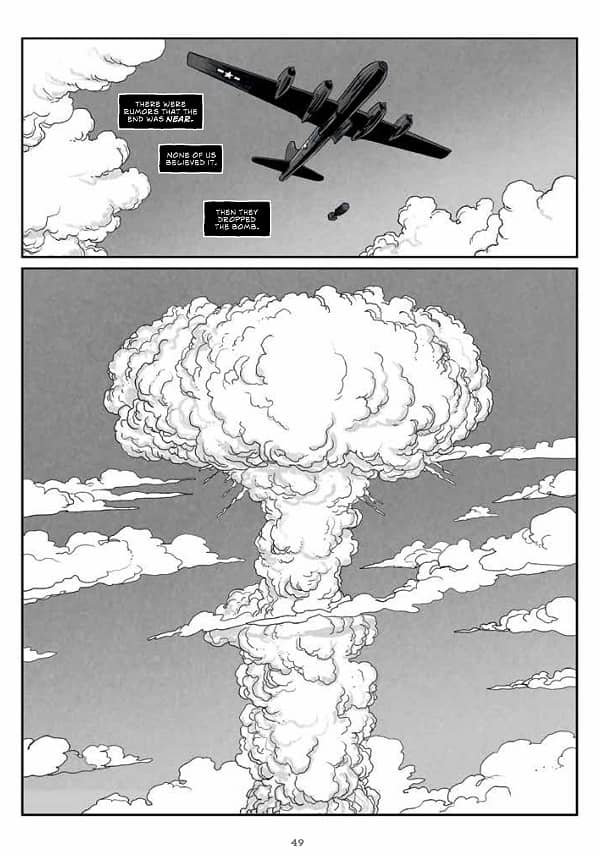 Serling’s military service, takes up a quarter of the graphic novel. That’s a lot of real estate in a story, and this invites the reader to ask ‘what if?’ questions. How much of what came later was driven by those three years in the army? If Serling had never served, would there have been the death-daring test parachutist? Was the darkness in Serling and his stories born in the Pacific Campaign, or did he bring it to that conflict where it became magnified?

I don’t think that there would have been a Twilight Zone without Serling’s military service; I think it changed him and made him look at the world in a different way. A lot of the time, people coming back from ware are so changed that they feel as if nobody can understand them, nobody other than other veterans, that is. And I think this sense of alienation and the fragility of human life is prominent in a lot of Serling’s work. 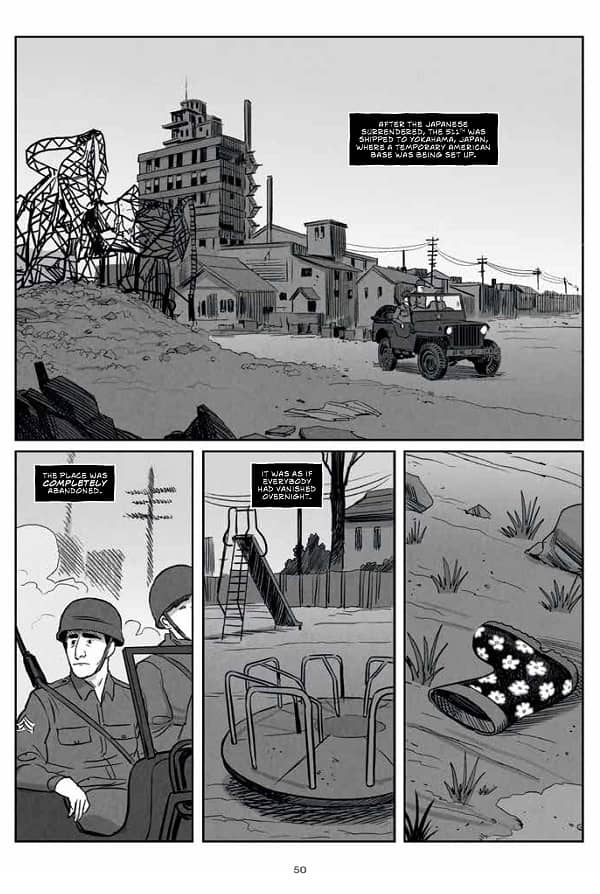 Twilight Man leaves a strong impression with the reader. What enduring piece of Serling will be sticking with you?

I think my favourite works of his are still some episodes of The Twilight Zone, such as ‘Eye of The Beholder’ or ‘The Hitchhiker.’ I think his early teleplays are great, but they do not survive as well, mostly since they were shot live and the quality is so eroded. I think there’s a reason why The Twilight Zone endures.

Thanks so much for the chance to chat, Koren!

It was a pleasure, thank you.

Twilight Man is a 168-page softcover book and will be published on October 8, 2019. I really recommend it if you have any interest in science fiction or television history or graphic novels with real-life settings. And we are getting to gift-giving time. Books are an easy idea for someone on your list.

Derek Künsken writes science fiction and fantasy in Gatineau, Québec. His first novel, The Quantum Magician was nominated for the Aurora, the Locus and the Chinese Nebula Awards. Its sequel, The Quantum Garden, will be released on the 15th of October. He tweets from @derekkunsken.