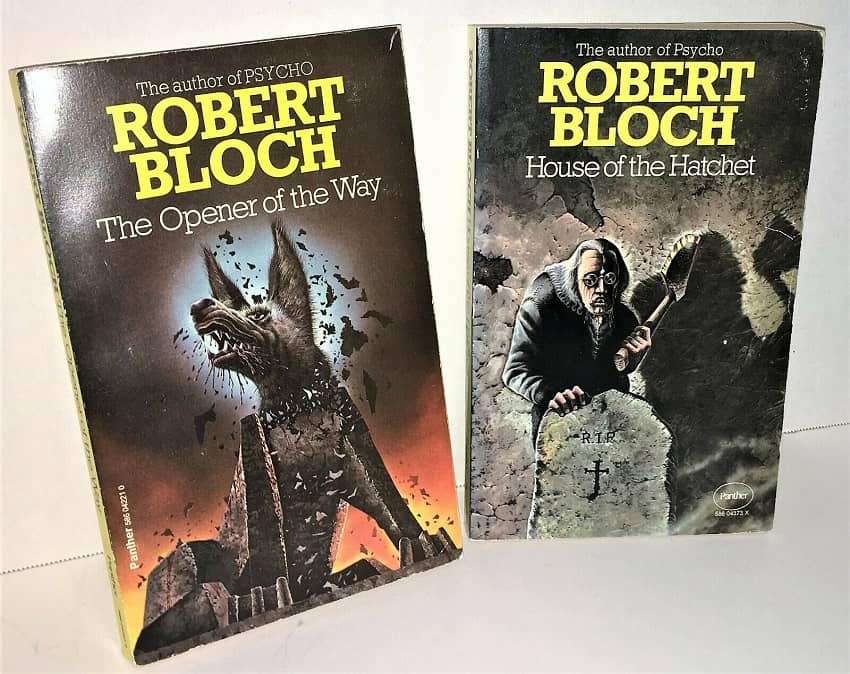 The Opener of the Way was Robert Bloch’s very first collection, published by Arkham House way back in 1945, when he was all of 28 years old. It contained 21 stories, all but two of which originally appeared in Weird Tales, including classics such as “Waxworks,” “Yours Truly, Jack the Ripper,” and the Cthulhu Mythos tale “The Shambler from the Stars,” which inspired Lovecraft to write “The Haunter of the Dark,” his last work.

The Opener of the Way was to be Bloch’s only fantasy collection until Pleasant Dreams—Nightmares was published by Arkham fifteen long years later. Like most early Arkham House collections, it is a very expensive book these days. It has never been reprinted in the US, which hasn’t hurt its collectability any. Fortunately Panther reprinted it in the UK in 1976, splitting it into two paperback volumes: The Opener of the Way and House of the Hatchet.

Of course, those two paperbacks are now highly sought after as well (the set pictured above sold on eBay this summer for $72.51). Which figures. I only learned about the Panther reprints recently, and after a brief search tracked down a copy of The Opener of the Way paperback for $9.95, which made me happy. Here’s a look at the contents.

The Opener of the Way (Panther, 1976). Cover by Anthony Roberts

The editors at Panther clearly had fun writing the back-cover text.

Here’s the Table of Contents for the Panther The Opener of the Way, which contains 10 of the 21 stories from the Arkham edition.

The Arkham House hardcover is a fine option, if you can find a copy.

The copyright page of the Arkham edition is like an advertisement for Weird Tales. Nineteen of the stories within appeared in the grand old lady of the fantasy pulps; the other two were published in Amazing Stories and Strange Stories. 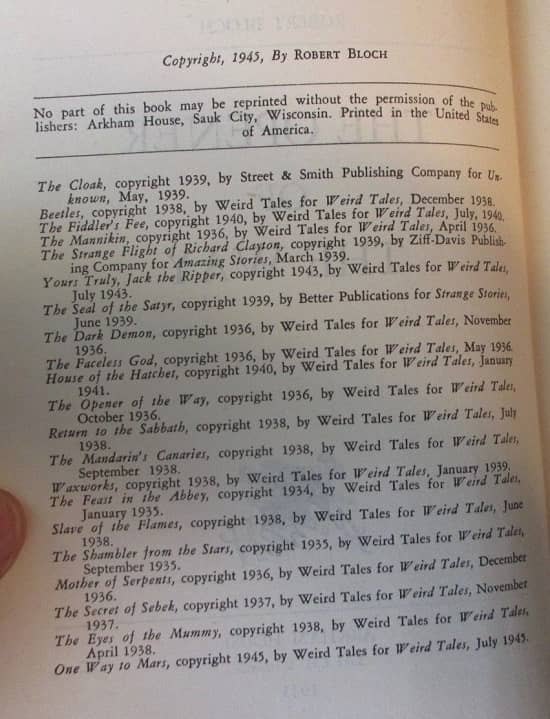 Here’s the jacket flap copy for the Arkham edition, which makes a big deal out of “Yours Truly, Jack the Ripper,” and “The Shambler from the Stars.” 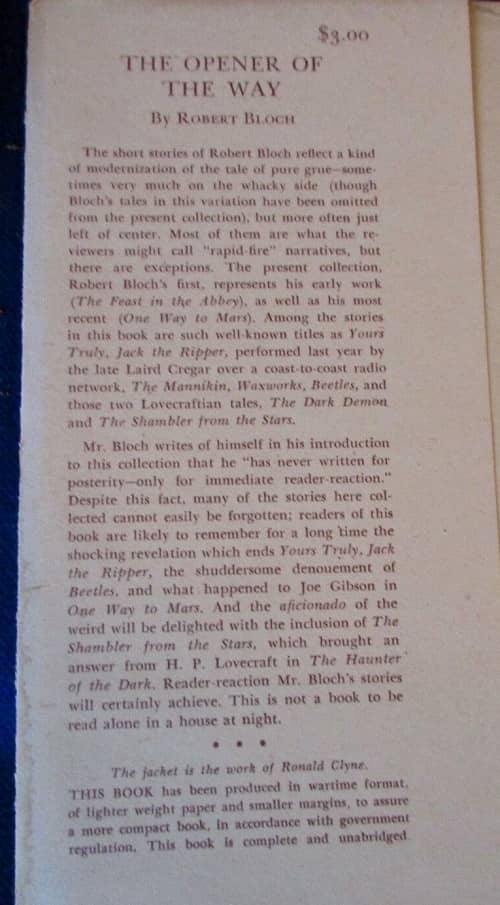 I have not yet managed to find a copy of the second volume, House of the Hatchett, though copies in good condition are generally available for around $20. I guess I just love a bargain. I’ll find one eventually.

House of the Hatchet (Panther, 1976). Cover by Anthony Roberts

The Panther paperback reprints Bloch’s original intro (again), and contains the remaining 11 stories from the Arkham edition of The Opener of the Way.

Here’s the complete publishing details for all three volumes.

The Opener of the Way has been out of print in all formats since 1976. There is no digital edition.

John- The Early Fears is an omnibus of his first two collections.

I just bought the Arkham House 1st ed. Signed. I am retired and have some money. I am also starting to read all the Arkham’s I have purchased over the 30 years I have collected them. I probably have just 15 expensive titles left to buy.

I just bought the Arkham House 1st ed. Signed. I am retired and have some money. I am also starting to read all the Arkham’s I have purchased over the 30 years I have collected them. I probably have just 15 expensive titles left to buy.