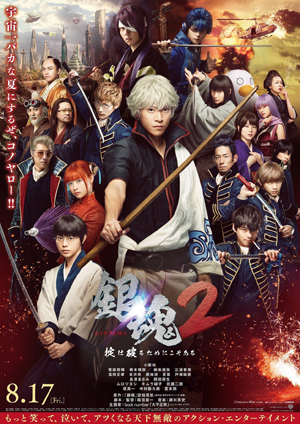 My first movie on July 28 was one of my most-anticipated of the festival. In 2017 I watched Gintama, a live-action manga adaptation I thought was one of the funniest things I’d ever laid eyes on, and which also told a good solid science-fictional action-adventure story. Naturally when I saw Gintama 2 was playing at Fantasia I was eager to see it. It is unfortunate that sometimes great expectations result in great disappointment.

The story of Gintama 2, which is titled in full Gintama 2: Rules are Made to be Broken (Gintama 2: Okite wa Yaburu Tame ni Koso Aru, 銀魂2 掟は破るためにこそある) follows the first directly enough. In an alternate reality where extraterrestrials conquered Japan in the nineteenth century, a new society’s sprung up that’s a weird mix of period technology, super-science, Japanese cultural traditions, and aliens. Samurai were discharged from their traditional role, launched a rebellion, and were defeated. One former samurai, Gintoki Sakata (Shun Oguri, Terra Formars), has formed an odd-jobs company with young Shinpachi Shimura (Masaki Suda, Wilderness, Assassination Classroom, Princess Jellyfish) and superstrong teen alien girl Kagura (Kanna Hashimoto, Kingdom, Assassination Classroom). This time out, they become involved with a plot against the shogun, and a scheme that divides their country’s police force, the Shinsengumi.

The main actors from the first movie reprise their roles. Director Yuichi Fukuda returns as well. But the feel of this movie is very different. There’s less comedy, and less focus on the main characters. I have no idea how much this reflects the source material. But I found I was disappointed.

To be clear, this is recognisably a sequel to Gintama. It has a similar look, with outrageously-costumed leads wandering a Japan blending past and future. And there is still a lot of humour, in a similar vein to the original. There are more gross-out gags than in the first film, but not so much as to represent a really different approach. Early on, in particular, we see some of the same kind of metafictional jokes that marked the previous movie.

Unfortunately, that doesn’t last. Instead Gintama 2 turns out to be more interested in the internal strife within the Shinsengumi, to the point that the ostensible leads are largely sidelined. While the film does find some humour in the Shinsengumi storyline, for the most part it’s much more restrained. We get a scheming manipulative villain we’re apparently meant to take seriously, and the riotous pace of the first movie never kicks in. 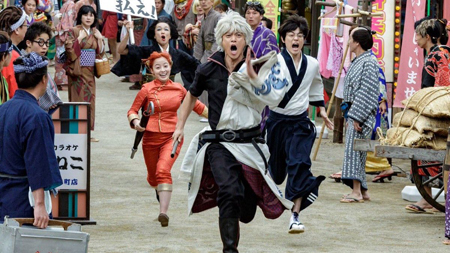 Making matters worse is a conflict in performance styles between the actors playing the leads and those playing members of the Shinsengumi. Gintoki, Shinpachi, and Kagura are screaming, frenetic, and broad. That can be wearying, but the actors do it well. On the other hand, the actors playing the various Shinsengumi characters are much more likely to find humour in underplaying their roles. It’s not a bad choice. But it means the two sets of characters feel as though they’re in completely different movies.

The action scenes are fine, but aren’t constructed with humour in mind, for better or worse. Character does come out to some extent, mainly the character of the villain scheming against the Shinsengumi, and the cops he’s manipulating or opposing. The three leads have so little to do for much of the movie their return for some of the big set-pieces feels unearned and indeed even a little random — not on a plot level, but in that this is a story that doesn’t directly affect them. It’s a bunch of stuff that happens to their friends, with some bearing on the world around them. That’s not nothing, but it doesn’t seem central to their concerns. So while watching the movie, either the leads become secondary, or the story does. 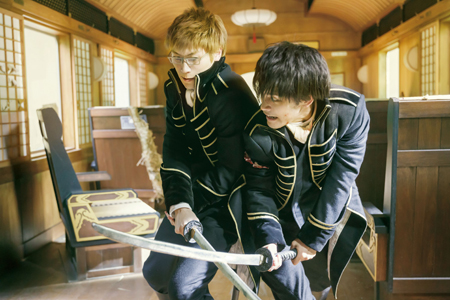 The development of the plot is effective mechanically. The villain is interesting, but for the most part lacks any obvious element of humour in his backstory or motivation. Or dialogue. His plan’s fine, and how it all explodes at the end is logical; the climax goes through a number of different stages, and they all have some visual interest. But the lack of character focus means it feels empty.

I’ll note also that the world is unexplored relative to the first movie. There’s not much of a sense of the alien presence in this society, or indeed much play with the society at all. The political situation’s significant, but left too vestigial to be interesting (one suspects some of the shogun’s scenes had to be cut from the 135-minute film). There’s not much new.

On top of everything, some of the humour misfires. The gross-out bits aren’t any more than gross. The supporting character of an annoying club owner remains merely annoying. One of the best jokes, coming toward the end (involving a raccoon who assuredly is not a cat) is a retread from the first movie.

The movie sets up a number of plot strands in the first act from which it then turns away. Gintoki and friends need money to pay off their landlady; then never really try to get it. A subplot involving the shogun doesn’t get developed. In all, it feels as though the Shinsengumi hijack the movie, centering it on them rather than the potentially more entertaining stuff going on with Gintoki. 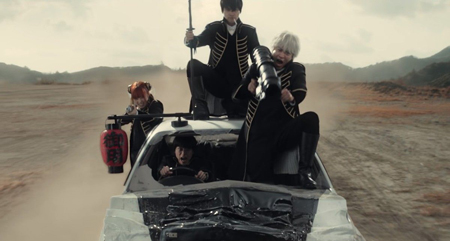 Gintama 2 is not a bad movie, and not really even a boring movie. There’s usually something eye-catching going on. But it doesn’t have the pace of the first film. And at two and a quarter hours, it feels long. It lacks something of the easy sense of fun of the first movie. It’s pleasant, but not exactly engaging. Again, I have no familiarity with the source material, or even with the anime adaptation. All I can compare it to is the previous Gintama. The filmmakers haven’t lost any technical ability. But the ingredients aren’t there; the script isn’t as inventive or as precise a blend of character, world, comedy, and action. There are moments of all those things here. But putting them together consistently, that’s the trick.