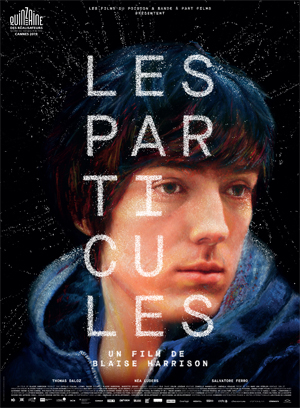 For my last movie of July 27 I crossed the street to the De Sève Cinema to take in the French-Swiss co-production Les Particules (The Particles). It’s the first fiction feature by director Blaise Harrison, who co-wrote the script with Mariette Désert. After a day of particularly frenetic movies, this was good way to end the evening; a subtler, atmospheric, intelligent, and character-based film that thoroughly succeeded at what it was trying to do.

The movie follows Pierre-André, or P.A. (Thomas Daloz), an inarticulate older teen in a small town on the Franco-Swiss border. He’s in a band, kind of, or at least has a group of friends; we see them at school, and buying drugs, and taking drugs, and wandering around. We see a romance between P.A. and a chronically ill girl named Roshine (Néa Lüders), and watch their relationship develop. It’s all good slice-of-life storytelling.

Except we also follow P.A. on a school trip into the Large Hadron Collider hundreds of feet below their village. And we come to suspect the installation might be linked to the strange things that happen over the course of the movie, slowly at first, then as the film goes on a little faster and a little more obvious. Reality changes. Things, and characters, disappear. Are the quantum-level forces of the LHC causing the world to change? Or does this have to do with mental illness? Or both?

This is a stunning movie, in its sound and images, but also in the way it brings out the sense of lived experience and everyday life. And then again in the way that everyday life fits into a symbolic pattern, exploring many meanings of ‘particles’ in human existence and in the larger world. So the first shot is a view from above of the countryside as P.A. takes the bus to school: lights of houses, here and there, against the darkness of the night, glowing particles in blackness. And so, later, Christmas tree lights are something similar. So also is snow, as winter and the school year wind on.

But the crucial point, I think, is that the youths we see in the film are particles themselves, fitting into the school system, fitting (or not fitting) into society, bouncing off each other in unexpected collisions. P.A.’s relationship with Roshine is symbolically matter and anti-matter meeting. The hard physics of the LHC provide the underpinning for a metaphor that gives the material of the film some unity.

There are some events here that are susceptible to a non-realistic explanation, but the naturalism of the movie’s what impresses most. Compositions are perfect both as fascinating images and as moments that move the character-based story forward. Dialogue’s minimalistic; the movie’s not afraid of long silences, and as we watch the characters sit in silence with each other we get to know a lot about them. When there is spoken dialogue, it feels like actual teenagers speaking to each other (my French mostly let me follow along with the movie, but I am reliably informed that the subtitles don’t catch all the subtleties).

The main performers are non-actors, teenagers from the area that Harrison recruited. That’s surprising, if only because they carry the film admirably. There’s a kind of low-key charisma and ease with the camera that’s unusual with non-actors, and they inhabit their roles completely.

Which perhaps can be attributed to Harrison’s directorial approach. He has a background in documentary film, and he’s spoken about how he made this movie by allowing the performers to find their own way through scenes, once given their characters’ situations. Supporting adults (presumably such as scientists and school personnel) play themselves. This sort of thing pays off: the film feels like a glimpse of actual teen life, not the heightened reality of most teen movies.

P.A. in particular is an involving character. We see almost the entire move through his eyes, and are engaged by his perceptions at the same time as we try to understand who the quiet youth is. He’s confused by a confusing world, skeptical almost in self-defense. And yet he’s curious enough to investigate the physics of the LHC as the weirdness around him goes on. He’s a musician, and so perhaps uncomfortable with words. Roshine’s more voluble and arguably has more to deal with, but the point of the movie is I think in part about what cannot be articulated; in that sense P.A. is the logical lead.

Is the story science fiction? Or fantasy? There are strange things, and a disappearance that’s likely to do with that strangeness. But the film consciously and wisely refrains from details and specificity. The weirdness is a part of the weird adult world P.A.’s confronting and growing up into. What I note is that the science-fictional underpinning of the LHC is met by the fairy-tale aspect of the countryside: a deep forest where P.A. and his friends venture for a camping trip and to experiment with drugs, and as well a particularly potent location right on the edge of that forest. It’s as though P.A.’s caught between science-fiction and fantasy, between the future of the LHC and the past of childhood fairy tales set among dark woods, between physics that explain the world and religious myths like Christmas.

Which is all perhaps to say that this is a movie about a young man in a liminal state, between childhood and adulthood. It’s about the moments before particles either cohere into a whole or disintegrate completely. It is about being between things, and about growing beyond that state in a way of one’s own choosing. Specifically it is about moving beyond the loneliness of being between things by finding another person, and learning how to relate to them on a profound and true level.

Science fiction or not, the movie is in the end a touching love story. But that’s not immediately obvious. Les Particules builds through vignette-like scenes, some of which have to do with P.A.’s relationship with Roshine, and some of which have to do with other aspects of his life; only at the end do we see how all these things relate. Like a complex physics theorem, all parts of the film interpenetrate all the other parts, building up P.A. as a character and moving his story forward to a fine ending. It’s a wonderful achievement, and one of the best things I saw at Fantasia this year.