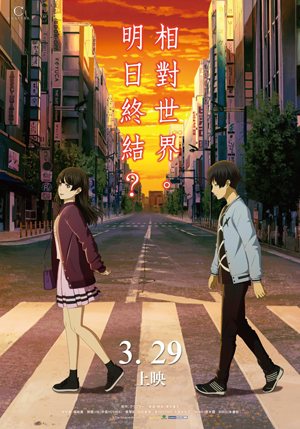 For my second film of July 27 I stuck around the Hall Theatre for another animated feature, this time from Japan. Preceding it was a 13-minute animated short from Canada.

“Alexis Inside” was directed by Montrealer Brandon Blommaert. Alexis is one of a group of friends who play a VR video game. When one of the friends goes missing, the vampire-like force that afflicted her is passed on to Alexis, who shuts herself away from the world. Can her remaining friend save her? The short’s open to interpretation, and has a stylish look based on old-style computer graphics given modern details and animation. I read it as being about depression, and see an ambiguity in the title having to do with the insides of Alexis, as opposed to Alexis choosing to lock herself away from the world. The film’s an interesting, disconcerting piece, somewhat alienating due to its look but ultimately emotionally engaging.

The feature I’d come to see was The Relative Worlds (Sotai Sekai, ソウタイセカイ). Written and directed by Yuhei Sakuragi, it’s adapted from a series Sakuragi did for Hulu Japan. Shin (Yuki Kaji) is a Japanese teenager whose mother died a sudden inexplicable death when he was a child, part of an ongoing wave of inexplicable deaths across Japan. His date with Kotori (Maaya Uchida) is interrupted by the death of his father, which we in the audience see is connected with something far stranger. It turns out that Japan is linked to another reality, where history took a very different turn. Everyone in Shin’s reality — or at least Shin’s Japan — has a doppelganger there, and when somebody in one reality dies so does their doppelganger in the other. Shin’s double, Jin, has crossed over to this reality to kill Kotori, because in Jin’s reality Kotori’s double is the despotic Princess Kotoko, who rules the dystopia of that world and also has dark schemes for this one.

This is not a bad plot, and the deaths of Shin’s parents are unsurprisingly tied in with the core plot of the conflict of the two worlds. There’s a solid emotional background, in other words. The problem is the rest of the story. It’s uninvolving, playing out on a small scale. This does change in the last third or so of the film, as the other world deploys the full strength of its forces, and organisations in this world get involved. But the build’s erratic, too slow for too long.

What I think the movie is trying to do is keep the story focussed on the teen protagonists, Shin and Jin and Kotori, and that’s not a bad idea. But there’s an asymmetry. The bad guys from the otherworld are too powerful to stop. You understand why Jin planned to kill Kotori, and the movie doesn’t really come up with a better alternative. Nor does it effectively explore the morality of killing an innocent for the greater good, partly because the science fiction aspect of the story is so outlandish, and partly because the greater good is abstract. The movie doesn’t really dramatise either world; doesn’t make us believe in a society of individuals in either reality. 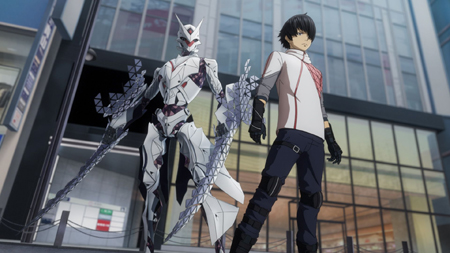 Partly that’s because the film keeps its focus so tight. Partly also, I think, because the characters don’t react as strongly as you might think when confronted with the other world. Most human beings live in a web of relationships with others, meaning if we come across a parallel reality with duplicates of everybody we ever knew, we’ve got a lot of complicated emotions about a lot of people. We’d have to get over thinking of doppelgangers as the people we actually know. And there’s not a lot of that sort of character-centred exploration here.

On a more profound level, the two-world set-up leaves an awful lot of questions. How the other society could be so dystopian and yet have technology in certain ways far ahead of our own is just the start of it. If deaths in one world are reflected by deaths in the other that have no obvious cause, why aren’t there an awful lot more mysterious deaths in this world? Or: how can two such different societies have the same birth rates? But beyond that, there are plot questions like: why didn’t Kotoko bring Kotori into her world long ago to keep herself safe?

It’s possible many of these questions, and my other problems with the story, were addressed in the original web animation. If so, I can only say the transition to the big screen did not go smoothly. In particular, if the movie had succeeded in depicting its characters with the depth it wanted, an awful lot else would have fallen into place. 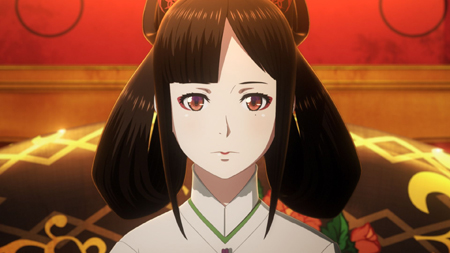 I’ll note that the animation generally also feels empty, as events take a while to build in scale. Story beats that should have an epic sense do not, and it feels like a budget issue. There are a fair number of individual battles involving killer robots, and they’re handled well but are over quickly. The final scenes had a definite sense of anticlimax to them, both over too soon and also lacking in emotional power — more a working-out of loose ends than the end of character arcs. Visually, the characters move stiffly and sometimes seem to float over the backgrounds in a way that doesn’t strike me as effective. There’s a story out there that the animation was partly done by machine deep-learning, and if so, I don’t think the experiment was a success.

To be clear, I don’t think there’s much that’s actively bad in the film. The animation’s at least effective, character motivations are clear, the plot has a semblance of logic to it. But the story doesn’t unfold smoothly, and it lacks depth — the thematic potential of a parallel world full of doubles doesn’t inform the story or characters. And when I say that I’m not asking for much. It doesn’t stand up to something like the old Star Trek episode “Mirror, Mirror,” say, which by comparison has a basic sense of how to use the idea of a parallel world to get at character. 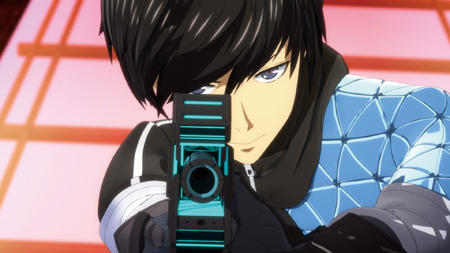 (I did note some light social satire, and it may be that there’s more in that vein that went completely over my head. You don’t know what you don’t know. But I would say that to a general North American audience, there’s nothing that stands out.)

The Relative Worlds never quite takes flight, despite having some interesting ideas. There are some nice designs in the other world, for example. There’s a killer robot-girl who goes through an interesting arc. But then that’s part of the problem: the supporting non-human cast member gets a more interesting story than the leads. This is not an actively bad anime. But I can’t say The Relative Worlds ever gets much better than merely ‘forgettable.’