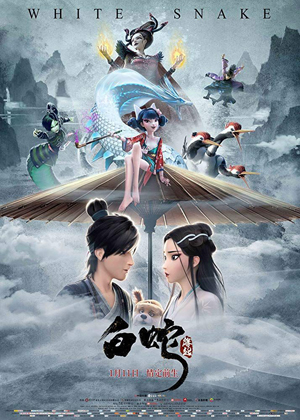 Saturday, July 27, was going to be a long day for me at Fantasia. Hopefully a good one, too. I had five movies on my schedule, starting at noon with the animated Chinese fantasy-adventure White Snake (白蛇：缘起, 白蛇：緣起).

Directed by Amp Wong and Ji Zhao from a script by Da Mao, it’s a prequel to the Chinese legend of the White Snake, one of China’s Four Great Folktales. That story was first written down in the Ming Dynasty but originated in the Song Dynasty; the film’s set hundreds of years before that, in the Tang Dynasty. As the movie opens, snakes are being hunted to make immortality drugs for an evil general. A snake demon, Blanca (Zhe Zhang), tries to assassinate him and fails. She escapes, and wakes as an amnesiac in a village of snake-hunters. She’s cared for by a scholar-hunter named Xu Xuan (Tianxiang Yang). They try to uncover Blanca’s past, and in the process struggle with various supernatural forces, the machinations of the wicked general, and the plans of Blanca’s own family.

This a lovely film, colourful and action-packed with fluid 3D animation. It builds a spectacular fantasy world of misty mountains and wide rivers and thick forests and ancient ruins. Then it fills that world with spirits and demons and magic. And engaging heroes. The characters are well-designed and cartoony in a good sense; they move a little like marionettes in the hands of a master puppeteer, not stiffly so much as stylised. To me there’s a slightly classic feel as a result, though I can see other opinions varying.

Importantly, action scenes aren’t stiff in the slightest. This is a film that takes full advantage of animation’s capacities, using its medium to tell a magical story brimming with metamorphoses and impossible motion. Battles are large-scale events defined by supernatural tranformations. Even quick editing rhythms in those set-pieces don’t obscure the story, and still give us time to feel the impact of magic at work.

Which I think is important, as this is to me a literally wonderful film: that is, filled with wonder. It evokes that wonder by having a strong story with solid characters moving through a world of magic, but then also by presenting magic and monsters in a way that emphasises what is astonishing about them. It’s a fantasy story that knows how to present fantasy, which can be trickier than it sounds; it’s not just having characters stand around in shock at what they see. It’s that they, and we, keep seeing new things. The world expands, at just the right rate of change.

More precisely, we’re given new things often enough to always have a sense of a world even bigger than what we see, and what we see is pretty big. Characters and settings are mythic and inventive, particularly a magical demon-workshop that’s an excellent depiction of a completely magical setting, Santa’s workshop if it were run by a capricious demon. But then the village of snake hunters, set among high mountains, is also a great location; so is an abandoned temple with a dungeon complex beneath it that becomes the setting for combat and romance.

There is in fact a bit of a Dungeons & Dragons feel to the film (and anyone who wants to see Yuan-ti in action will be interested in this movie). But there’s also a deeper feel of myth, which to say that White Snake evokes the folktales and classic fantasy stories that influenced D&D. This is a mythopoeic movie, aware of the ancient roots of its story but also making it new, adding characters and ideas to the archetypes at its centre.

The plot is strong, with both the leads sympathetic. This isn’t precisely what is normally thought of as a character-based film, but there’s enough distinctiveness to Blanca and Xu Xuan that they’re involving and the slow build of their romance is charming. Meanwhile, Blanca’s sister Verta (Xiaoxi Tang) is an effective foil, now an ally and now an enemy, balancing her relationship with her sister against the demands of her snake-demon people.

In general the movie itself balances the realms of humans and demons well; if the film brings out the wondrous aspect of magic, that is in part by knowing how to balance it against the physical world. We see enough day-to-day life in the snake-hunting village that we have something to contrast with the lead characters’ voyage into the unknown. Events build nicely, and if the climax risks becoming a bit excessive, that’s a good risk to take.

It should be said there’s a sort of idealism, or idealisation, in the movie that tends to mark it as a young person’s film. It’s not necessarily for very young children; there’s a bit of blood, and some light (non-nude) sexual content that makes it definitely PG-13. But the humans aren’t particularly complex or contradictory. Strong people are strong. Evil people are evil, mostly. There’s nothing wrong in this so long as the story knows what kind of story it is, and this one does.

The film works with some of the themes of the original folktale, particularly the classic struggle of love against duty and against the way the world must be. It resolves itself with a fine balance of tragedy and romance that is a direct lead-in to the traditional legend of the white snake, ending effectively where that story begins. You don’t need to know the older story to enjoy the film — I didn’t — though the ending may play differently (and I think a post-credit sequence may make more sense).

White Snake is a fine fantasy-adventure film that succeeds because in its visual sense and its drama it captures the feel of a folktale, and marries that tone to the structure of an adventure movie. Those are the ingredients of much classic fantasy, and so it is here. The setting’s intensely realised and a visual treat. Its primary audience is probably tweens and younger teens, but if it’s a children’s story, it’s the kind of well-done children’s story that can be experienced with pleasure by adults. I liked it a lot.

I was happy to read your review, as I was quite impressed by the movie as well. (My apologies to the film-makers if they stumble across my dismissive mini-review.) I would love to see a spin-off film (or TV) series featuring the demon-cat-woman and her amazing work-shop, which was probably the coolest cartoon set-piece I’ve seen in years.

That was an awesome scene! (Or two scenes, I guess.) I remember being confused when the demon showed up during the post-credit sequence, but that bit makes a lot more sense having read the original folktale.