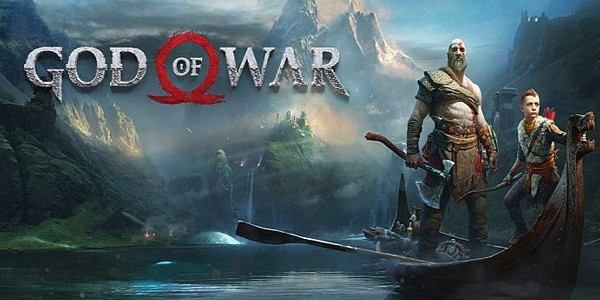 On occasion, I review video games for the site chalgyr.com. It’s really just a small thing I do every so often, when I’ve finished playing a game.  Currently, I’m working my way through Far Cry Primal, and enjoying it immensely. Not too long ago, though, I played through the latest iteration of God of War. I enjoyed the older God of War games on a very surface level. I moved my avatar, rage-incarnate, Kratos, across the screen and used him to utterly obliterate my enemies. I felt nothing for Kratos, and despite cut scenes that were designed to make him at least a little sympathetic, I wasn’t particularly attached to his story. There is nothing compelling or appealing about the embodiment of toxic rage. I played for the mayhem and the silly fun.

Then came old man Kratos and his son, and everything changed.

Let me begin by stating that I have no intention of reviewing the game again here. I’m not going to talk about the ridiculously fun game play, or the graphics, or anything like that. I am concerned only with the development of the Kratos character.

The game surprised the hell out of me. Long used to the boring, but dumb fun, stories of the God of War games previously, the depth of this game and of the themes it explored, blew me away. I went from not caring about Kratos, to being deeply affected by him, and actually tearing up at the last of the game, which hinted at his death. 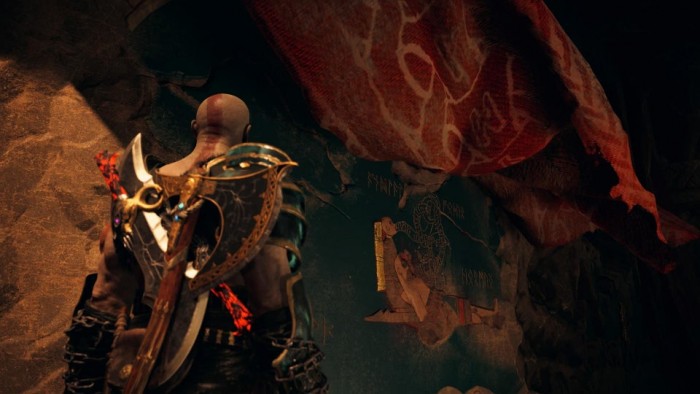 What struck me most of all was the man Kratos became throughout the game. The player is witness to the slow unbinding of the toxicity that was the man Kratos was, thanks in large part, no doubt, to his young, wonderful son. The game begins with a father and child in mourning. Kratos lost his wife (Lover? It’s never really explained), and Atreus a mother. Between father and son exists an enormous gulf; fueled, one could speculate, by the trauma of Kratos’ own upbringing (which we learn embedded in him all of his terrible, toxic traits. Let’s face it, being ripped away from one’s family at an incredibly young age and then taught from then on to be a ruthless killer can’t create a healthy psyche) and by the trauma of the perpetual cycle of patricide experienced by the gods of the Hellenistic world.

Kratos immediately strikes me as having fundamentally changed from the rage-monster of his previous iterations. He has shame, as evidenced by his hiding his scars from the chaos blades from his son in the very first few moments of game play. This small display of a human emotion (other than rage) was entirely lacking in previous games. You see him struggle with his temper as he travels with his son in the tutorial section of the game. He expresses doubt and fear following the first fight with ‘the stranger’ (I’m not going to spoil everything), and feels unable to do anything without his beloved Faye.

As the game progresses, Kratos starts to open up. The toxic barriers that prevent him from showing any humanity are slowly eroded away.  He sometimes displays humor, even compassion; taught, no doubt, by his son’s willing heart.  But most impressive of all, Kratos shows that he has gained no small amount of wisdom.

I do not throw the word wise around lightly, but in this game, Kratos is wise. 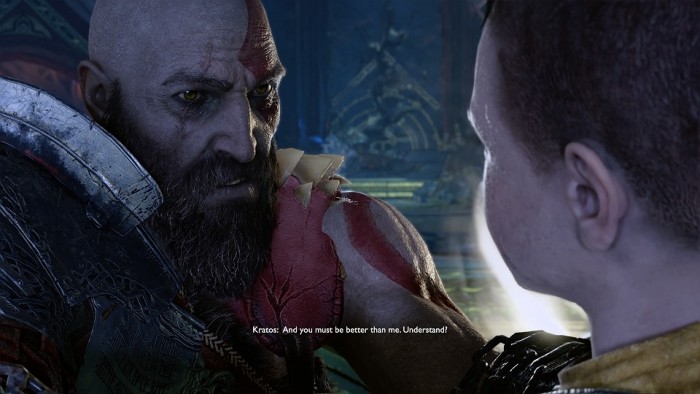 One of the many times Kratos takes his son aside and imparts some serious wisdom. Another favorite of mine: “Don’t be sorry. Be better.”

In this game, he is aware of how terrible he was, and how, if he is not careful, he could turn his son into the same monster. Throughout the game the player is witness to a beautiful exchange. Kratos teaches his son to control himself, that the world is not as safe as one might hope, to exercise caution, and how to deal with having to face a bleak world. Atreus, aching to reach his father, teaches old man Kratos to be softer, even affectionate. He proves to his father that not all the world is pain and evil. Thanks to Atreus’ open heart, the pair even manage to make friends in a pair of (absolutely hilarious) dwarf brothers.

Most of all, Kratos, knowing the potential for terrible things that lives in his son, urges Atreus to learn from Kratos’ own mistakes, not to succumb to the things he did, not to let anger and baser emotions to control him. To, in essence, be better than Kratos was, and is. One of my favorite quotes to this end happens near the completion of the game, when Kratos notes, “Who I was is not who you will be.” It struck me dumb for a moment.

By the end of the game, the father who could not reach out to his distraught son in the beginning, thinks nothing of pulling him close to comfort him. The unnatural gulf is bridged, and Kratos and Atreus have bonded.

Describing it here can do nothing for how incredibly affecting this story was. You really must play through it to experience the full effect. 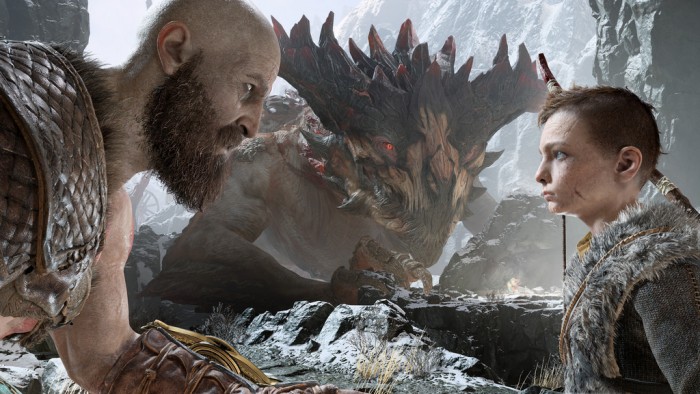 Atreus convinces his father to help the dwarf Sindri against the dragon. One of the many small signs that Kratos is starting to soften. In previous games, he’d probably have thrown Sindri into the dragon’s maw to distract the beast.

This older, wiser, more measured Kratos is by far a much more engaging character than the angry little man I made run around ancient Greece killing gods in the other games. By stripping away the toxic tropes that so often masculine protagonists are built out of (though much less so now days, thank heavens); by making Kratos unsure and afraid, troubled by and fleeing from his terrible past, making clear how damaging to him personally it was to be what was, essentially, a masculine power fantasy, by turning the story from one of revenge to one of a father struggling to connect with his son, afraid both of losing his boy and somehow causing the same cycles that created him – turning his child into the monster he was, the folks at Sony Santa Monica have managed create a hero I can fully stand behind.

Note, that I don’t actually have a problem with stories about revenge, or people being blackmailed into being heroes, or such things. They can be fun if done well (John Wick comes to mind). Most often though, they’re tired tropes that are, well, boring.

Kratos is a new kind of hero. He’s not the young, hot, snarky action hero of the 80’s and 90’s, nor is he the eye-rolling anti-hero of the 2000’s… or even his own earlier versions of villain-protagonist. He’s not a chosen one, not out for revenge, or to prove himself the best, nor is he being blackmailed into doing the heroic deed. He is merely trying to fulfill his lover’s wishes and keep his son safe, and those pesky Asgard types keep interfering (NONE of what went down would have if they’d just left him alone). He’s trying to find peace, and on the way finds his humanity again. 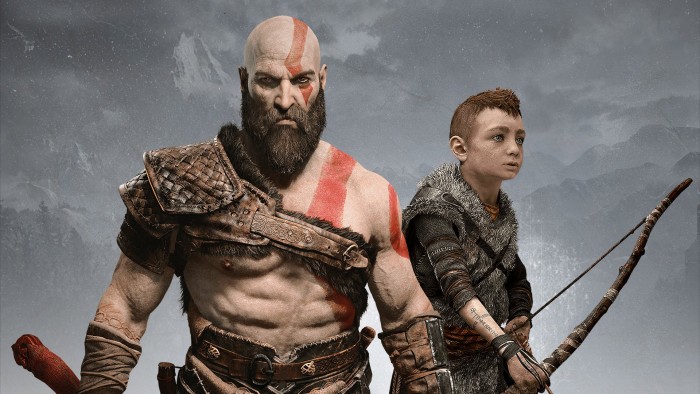 Father and son, the ultimate duo.

Damn I love this game.

Now ask me how this God of War is (accidentally?) feminist.