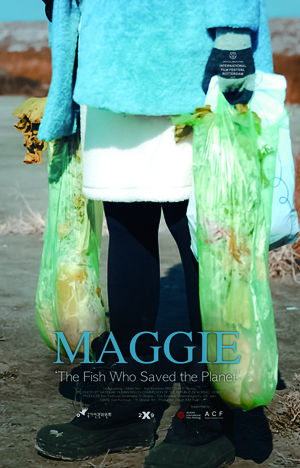 July 17 for me was a day of rest and running errands; then for my first film at Fantasia on July 18 I went to the De Sève Theatre to watch Maggie (메기). Directed by Yi Ok-seop from a film she wrote with star Koo Kyo-hwan, it’s the story of Yeo Yoon-young (Lee Ju-young), and her boyfriend Sung-won (Koo). Yoon-young’s a nurse at Love of Maria Hospital in Seoul. One day, an X-ray surfaces showing a man and a woman having sex in the X-ray room. The next day almost nobody comes in to work; the X-ray room’s a popular site for assignations, and everyone thinks they’re one of the figures in the X-ray. Yoon-young’s the only one who dares show her face, along with Doctor Lee (Moon So-ri). They end up forming an unlikely partnership as Maggie helps Lee learn to trust other people. Meanwhile, Sung-won finds work filling in sinkholes opening up in Korea, following an earthquake predicted by a catfish named Maggie — who also turns out to play an important role within the film.

This is only roughly a description of the movie, indicating just a few of the plot strands. Maggie unfolds through a series of vignettes, with flashbacks and chapter titles and an unseen narrator. It’s a consciously quirky approach to a film that isn’t afraid of punching up its plot with a certain amount of surrealism. You wonder what happens to the patients at a hospital with no staff, for example, and though we do see a few people left in the empty building, by and large the question’s unanswered.

What is most interesting, and I think in the long run surprisingly effective, is the contrast between the surface tone of light comedy and a deeper sense of abiding bleakness. The conclusion suggests hidden depths to people we think we know, and not always abysses into which we would choose to gaze. While the pacing and general approach seem to aim at a gentle comfort, much of what actually transpires depicts some real pain.

The vignette structure seems to ask the viewer to see the humour of events, and the surrealism is at first distancing, but the subject matter (of trust, of violence) has a weight that in the end can’t be ignored. This could have been a significant disconnect, and at first I felt it was. The more I thought about it — and after having seen at least one movie that tried something similar to Maggie and in my judgement failed — the more I came to appreciate this film, and suspect that I hadn’t been sensitive enough at first viewing to what it was trying to do. 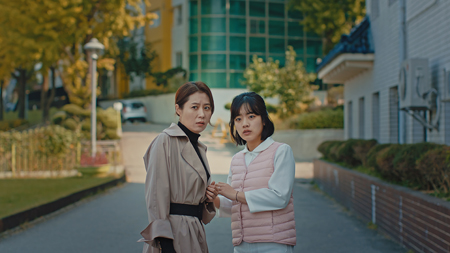 I think the surrealism is effective, for example, because it’s based in character. This is a movie that’s more concerned with the people at its heart than with any kind of ‘world-building.’ Plot points that one expects to recur don’t. It never comes out who took the X-ray that kicks the story off, for example. That’s arguably a bit of a misstep; one might deduce that if Yoon-young and Lee are the only two people to come to work after the photo emerges, and we know Yoon-young didn’t take the picture, then that leaves one suspect. But apparently it’s not Lee, either.

In fact the point is that we don’t know who took the X-ray; we might as well say ‘social forces’ took the picture. That only becomes clear in retrospect, as we work out what the themes of the movie are, but in the long run it’s probably the right choice. This is a movie about social pressures, about trying to do what is right, and perhaps ultimately about trying to support and trust other people. The question of who did what and why is perhaps less signifcant, in general, than working out what to do about what was done. 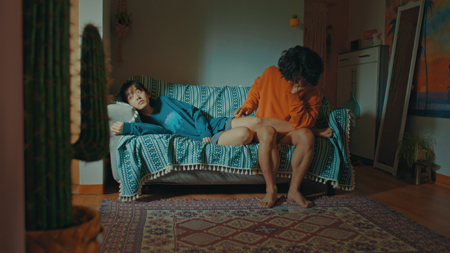 This works, I think, because the acting’s strong. Lee Ju-young’s Yoon-young is sympathetic and highly individual, strong-willed yet empathic. Koo’s Sung-won is thought-through in an interesting way; we are told something about him more than halfway into the film which changes our perception of him if we think it’s true, and Koo plays the character in a way that challenges us to make a firm assessment. This ambiguity does set up the ending, and we do get a firm answer, and it does continue the themes of the film; thus again character and theme and plot are fused together as they must be for this movie to work.

The ending is perhaps a trifle abrupt, but again, time having passed, I think that works to make it memorable. We wonder about a character’s choice at the end, and consider options, and realise it was the best answer. It does recast the film a little, bringing out both the bleakness (about human nature) and the optimism (in the hopes for the future and the ability of people to move on). Which is really what you want in a good ending.

Worth noting, almost incidentally, that the sense of place is strong. I don’t necessarily mean that the movie’s about Seoul as such, though there is a sub-plot about protesting development, and Sung-won’s job does have him literally filling in the city’s streets and so maintaining the infrastructure of the community. And we do get some lovely scenes as one character or another bicycles through the city. I mean that the physical locations are shot well, so that each setting is distinctive while making a kind of whole. The place feels expansive, feels like a location where anything can happen, matching the gentle surrealism of the story. 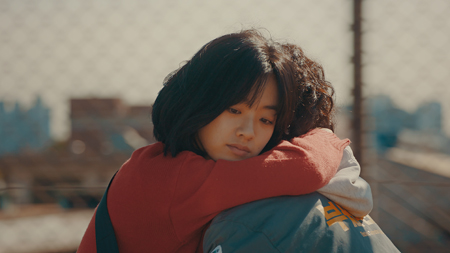 I will say I thought the narration, or at least the narrator, was a bit too detached from the rest of the story. To an extent that may be the point, establishing that the story’s not being told out of a specific agenda, but it makes the choice of narrator feel like a gimmick. I will also note that while I’ve come around to appreciating the film, I can easily understand other people not warming up to it; the various ingredients and themes are a curious mix. I personally have come to feel it works. But if you’d asked me in the hours right after I saw it, I probably would have said the different pieces of the story don’t add up.

In the long run I think they do. I think the narrative tone remains consistent, and as the story becomes more obviously shadowed we realise how dark the earlier segments were. Maggie is a curious film, ultimately warm-hearted, but that only becomes clear when we realise that that apparent warm-heartedness its tone promises was always a way into a cold depiction of the world that itself is depicted as cold as a kind of act of empathy: and so the film comes around again to being warm-hearted. Such is how I read it, anyway, and I hope it ends up being given many readings by many viewers. 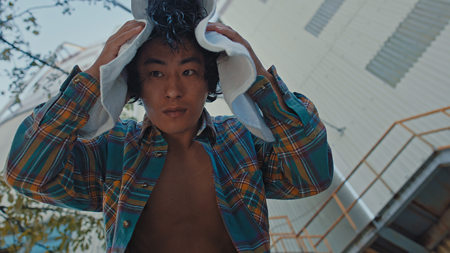 After the film, director Yi Ok-seop and actor/writer/producer Koo Kyo-hwan took questions. (As always, what follows is from quickly-scribbled notes.) Asked about the inspiration for the film, Yi said the movie was the fourteenth project made with the support of the National Human Rights Commission of the Republic of Korea. The theme was to be “youth,” and she decided that talking about youth meant talking about things happening around them. The choice of episodes followed from there. The X-ray represented issues around the violation of privacy. The protests against development were intended by Yi to reflect her protests in her twenties for democracy. She said that small-scale earthquakes in Korea provoked a sense of insecurity among many young people, and so she wanted to reflect that in the episodes of the film.

Asked about the use of humour in the film, she said that humour is an element that makes people happy whatever the differences in their lives. All her stories treat serious problems with humour. She’s liked those kinds of stories from childhood. Asked about the themes of invasion of privacy and domestic violence she seemed to be dealing with, she said that in Korea secret filming of women is a serious social problem to which attention has just recently begun to be paid. Punishments have become more severe, but in her opinion still are not severe enough. She said that there can be hidden cameras in toilets, and as a result women have taken to wearing hats into the toilets as a way to conceal their faces. Similarly, many women are killed by their partners because punishments are too light. There have been more and more women gathering and protesting against it. 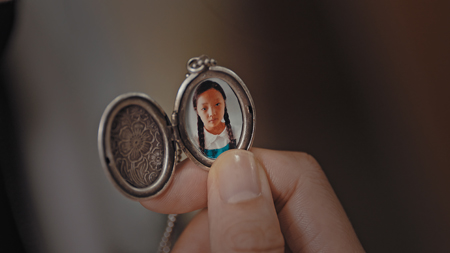 Asked about the symbolism of the last scenes, she said that everyone has a hole in their mind or life that they try to fill up with the choices they make. She discussed the choice made by Yoon-yong at the end, and why. She was then asked about the symbolism of the catfish, and whether it was related to the internet term ‘catfishing.’ She said she was curious about catfish, which will jump very high when they feel there’ll be an earthquake within a few days. She thought about friends of hers who were calm and silent but knew everything that was going on around them, and saw an analogy with those characteristics of quiet knowers. She wanted to have a person or thing that could console difficulties and listen to humans’ stories. She said it was important to pay attention to those around us and observe over time to see if they are suffering; for youth it was important to listen with love to their problems, and then help them to a better life.