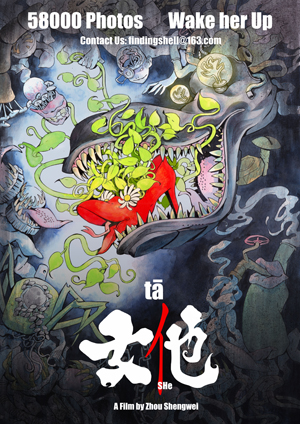 The fourth and last movie I saw on July 16 was the most experimental movie I’d seen at Fantasia, not only this year but possibly in all the time I’ve been going to the festival. Before that feature, though, was a short almost as strange.

“Bavure” was directed and written by Donato Sansone. An animator’s hand mixes paints, makes an image, then remakes it, then remakes that, and so on through an increasingly cosmic story. A woman is made pregnant, a child comes out, and becomes an astronaut, and meets aliens, and on to a bleak climax. ‘Bavure’ means smear, or mistake, and the imagery of an animator remaking a smear of paints into a series of images fits. The animation technique’s a striking and effective way to move from image to image, the story’s cute, and at 5 minutes the film doesn’t outlast its welcome.

Next was the feature. It was called SHe, a movie directed, written, and edited by Zhou Shengwei. A work of stop-motion animation, Zhou made 268 models for the film himself, and took 58,000 photos over the course of 6 years to make it.

The film’s a staggering work of imagination. None of the characters are remotely human. They are, in fact, based on shoes. In a world of strange creatures assembled from everyday objects, entities based off of men’s shoes oppress entities based off of women’s shoes. One of the latter escapes and has a daughter, but the mother has to find a way to get the resources to feed the child. Only by adopting a disguise as a man’s shoe and entering into the dreadful danger of a pseudo-capitalist workplace can the two survive. But strange things happen in the workplace: the lady-shoe does not fit in, but turns out to have abilities the other worker-shoes don’t, attracting the attention of the boss of the shoes — who then draws her into an even stranger behind-the-scenes world where the tables start to turn.

At least that’s how I understand the basic plot. The film has no dialogue (vocal sounds come from Lv Fuyang), and the lack of human features on the characters give the audience some space to find their own meanings for things. The body language of these creatures is I think relatively clear, but it still requires some focus to follow events. Or it did for me; perhaps that’s a function of how I parse images as opposed to words. 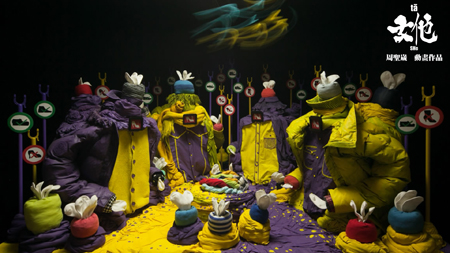 The world of the film is deeply strange, built not out of objects but out of strange assemblages of objects. Thus creatures are part shoe and part plant. Another shoe-creature is encrusted with typewriter parts, hooks, chains, gears, and a red ribbon-tongue. Clothespins buzz like flies. Later, an assembly line carries cigarettes past pens of worker shoes as an eyeball surrounded by the wavy arms of a star observes all. And it only gets weirder from there.

All these things are bright, indeed shiny, and the colours are as vivid to the point of garishness. Sound cues help to build the world, and at the same time create a jarring, abrasive soundtrack. The texture of everything is subtly wrong, a mix of organic and inorganic shapes, bits of junk recontextualised into a surreal world.

That world itself keeps opening new levels. The story’s simple enough, as the mother shoe suffers for her daughter and gains revenge and faces a kind of betrayal. But each movement of the story takes place against a new environment (a solid black background underlying everything), and each environment has its own inhabitants and rules. It has the feel of a particularly strange video game, I suppose, as the audience has to work out how the different elements of each stage work and how it relates to the previous stage and where the protagonist should go or want to go. 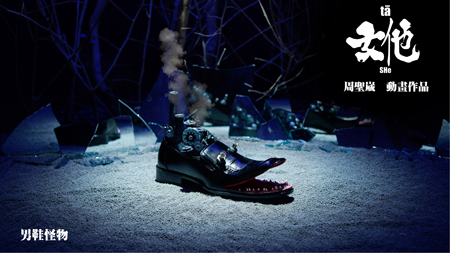 Thematically it’s a very clear satire of the daily grind of work, of patriarchy and gender roles, and of the exercise of power. Scenes of the male shoes acting together to mock the female shoe have an oddly incisive feel, depicting bullying and a specific kind of pack mentality with unusual clarity. Everything in this world is designed around subservience, around the establishment of a brutal structure that exploits everyone in it for the benefit of those of higher status: female shoes for male shoes, low-status males for high-status males, absolutely everyone for the boss of all we see. Against this bitterness there is the love of the mother for her daughter, the self-sacrificing drive that sends her back into the cruel world of work. The end of the film doesn’t so much undercut this as call into question the ultimate value of this love. Is a revolution possible? Or will a revolution recreate pre-existing structures with a slightly different group or individual at the top?

The movie works, I think, because there’s enough going on with the characters and especially with the lead that we empathise. It’s an odd thing to say about a shoe. But there it is: the way the shoe moves, the way the secondary design elements mimic eyes or facial features, we are led into her head. And the same with the other characters. We don’t, or at least I didn’t, always understand at every moment exactly what’s going on. But we understand the general outline of events, what the characters want, and the pain the protagonist goes through. 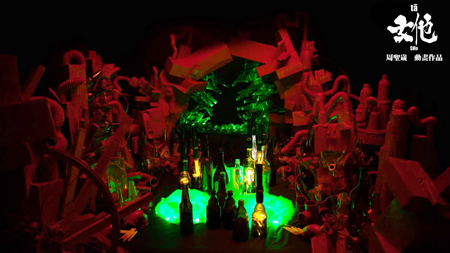 The animation’s not especially smooth, but is consistent. The quality of motion becomes assimilated by the audience, I think, and as I say character does emerge. I found an odd tension between beauty and ugliness; the quality of light and colour is attractive, while the character design is distinctive but based around assemblages of things that normally have little to do with each other. There’s a kind of discomfort in watching the film that I think is intended, or at least effective in context.

What does it all add up to? A 95-minute movie that feels a trifle long. And yet it’s difficult to see what could be cut. At one viewing, the protagonist’s conflict with the boss is perhaps a bit overextended. But I’m not sure whether a second viewing wouldn’t make more sense of it. There’s a certain density to the film, and the world’s so strange that what’s usually obvious in this case is not. Characters and entities present new abilities with a surreal logic that is basically unpredictable. That ought to be difficult to relate to, and at times it is difficult to parse, but the general thrust of the nightmare of the film comes through clearly.

SHe is a deeply strange movie. And if you like out-there things with thematic depth and bracing irony, it is for you.