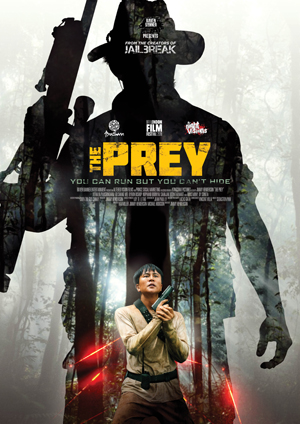 For my second movie of July 15 I went to the Fantasia screening room to watch the Cambodian film The Prey. Directed by Jimmy Henderson from a script by Henderson with Michael Hodgson and Kai Miller, this is a film that traces its narrative lineage back to Richard Connell’s immortal “The Most Dangerous Game.” In this case, the game’s played in the wilds of Cambodia, and the rules turn out to be surprisingly complex — and the number of players surprisingly large.

Xin (Gu Shangwei) is an undercover Chinese cop with Interpol trying to bust cyber-criminals in Cambodia, despite a significant language barrier. Swept up in a raid by the local police force that nets the criminals he’s hunting, he ends up on the wrong side of a warden (Vithaya Pansringarm) of an isolated prison. Along with a few other malcontents, he’s handed over to a hunting party who’ve paid the warden for a day’s amusement: the criminals will be released into the jungle, the heavily-armed hunters will track them down, whoever gets the most kills wins. But of course it doesn’t quite work out that way.

Rather than keep a narrow focus on a deadly game with one victim and one hunter, the film starts with groups of each — but as they get winnowed down, more characters enter the fray. Xin’s Interpol colleagues come looking for him. The warden and his men take a hand. And it turns out there are locals who live in the playing field. The interplay of the different factions effectively builds a considerable amount of suspense, giving the story more heft than a straightforward action story.

Which is not to say the action’s lacking. There’s a goodly amount of it, executed quite well. There’s some hand-to-hand combat, but also a lot of gunplay and general explosions. The fights are well-planned and well-choreographed, building to a suitably brutal conclusion. Effects are largely practical; there’s a low-tech ethos to this film, the firearms notwithstanding, that plays well. The fight scenes are focussed on telling the story, not on cool moves (though there are cool moves). It’s paced well, not lingering on any given situation. Characters do not wear out their welcome, and the movie does not shy away from racking up a body count very quickly. You do more-or-less know how long each character will last, but there are some surprises in how they play out their parts. It’s familiar without being generic or even all that predictable.

It’s pleasant to look at, as well. There are some fine long takes, especially an early one in the city that sets up the cyber-criminals who then get taken down along with Xi. The wilderness scenes are shot well in that the location creates a certain oppressive atmosphere. The script mostly avoids using obvious wilderness tricks in the back-and-forth of hunted and hunters, but the setting and specificity of place come through strongly nevertheless.

This is not necessarily a movie aiming at presenting a nuanced take on complex symbolic material, but it does have enough of a thematic idea to tie things together. Specifically, like Connell’s original short story, it examines the nature of humanity and how violence challenges the line between man and beast. This is worked nicely into the action-movie structure, so that early on we get a torture scene in which the warden reflects in good villain style that “I’m obsessed with those moments when man becomes animal.” And thus later, as a good action-movie hero, Xi gets to ask: “Remember that breaking point, warden? I’m past it.” (Whether the theme gains from the setting in what would typically be called a jungle, with the colonial overtones of the term, or whether it’s an ironic post-colonial choice, is something I will leave to those better suited to analyse the question.)

It’s all effective enough, and I particularly liked the way the movie shoots its city scenes with a greenish tint. It’s as though the verdant wild has reached out to shape the urban spaces human beings create for themselves. As though primal violence is always there, always about to emerge. The fact that Xi is himself a hunter by nature, and gets caught by another group of hunters to start the movie, gives a charming sense of recurrence to the idea of the hunt. And there’s another nice touch in having Xi need a translator. If language is one of the most characteristics aspect of human beings, having a character isolated linguistically makes a certain sense.

The acting’s solid, particularly Pansringarm as the warden. Physically unprepossessing, he seems at first the kind of functionary that exemplifies the banality of evil. But no, we learn he has a level of sadism and cynicism far beyond that, and Pansringarm gets this corruption across quite well. Still, this is not really an actor’s movie. Nor is it about fine writing. The dialogue’s reasonably solid, but mostly unmemorable; it gets information across smoothly and sets up a variety of dramatic moments, and that’s good enough.

It is the cleverness of the plot that makes the film work, more than anything else. New and plausible elements are constantly added to the story. Fights take unpredictable paths, and set up new situations. Suspense builds, aided by a strong soundtrack, and pays off in ways one does not expect. It’s all done in a tight 93 minutes, and the film covers a lot of ground in very little time.

The movie takes itself the right amount of seriously, like action movies in the days of yore. The successful attempt to create suspense keeps one engaged, and if the villains are occasionally caricatures, they’re not distractingly so. The final fight is as brutal and personal as it needs to be to pay off everything we’ve seen. The Prey is a solid creation, a good spin on an old idea, bringing a winning strategy to the tradition of the most dangerous game.