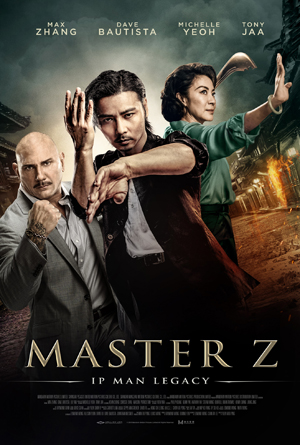 There’s a critical truism that all art is political. I would prefer to phrase it as “all art can be read politically,” because art has to be interpreted. And no work of art can be read only one way. Individual perspective and changing circumstances will give a work very different meanings, possibly including different political significance. (I once worked out my version of the truism as “all readings of art will depend in part on the reader’s historical and political situation,” which is why I’m not a sloganeer.)

Consider Master Z: Ip Man Legacy (originally 葉問外傳：張天志, romanised as Yip Man ngoi zyun: Cheung Tin Chi). Directed by Yuen Woo-ping, it’s a spin-off from the three Ip Man films that starred Donnie Yen (a producer for this movie), which were loosely based on the life of the kung fu master who taught Bruce Lee. Master Z is the story of one of the masters Ip Man defeated in one of the earlier movies, Cheung Tin Chi (Zhang Jin, also credited as Max Zhang; I’m told this film’s title comes from an alternate way of romanising ‘Cheung’). When we meet him, in Hong Kong in 1961, he’s sunk so far as to have become a semi-principled gangland heavy. As the movie starts, he leaves this life for a more honest path. Complications ensue.

Most particularly, there’s Kit (Kevin Cheng), a hotheaded drug-peddling gangster with a withered arm, and Kit’s sister Kwan (Michelle Yeoh), who leads a crime syndicate she wants to make into an honest organisation despite the corrupt British rule in Hong Kong. After Cheung gets involved in a fight between Kit and a young woman named Julia (Liu Yan) — who’s sticking up for her friend and roommate, the opium addict Nana (Chrissie Chau) — he ends up working in the bar owned by Julia’s brother Fu (Naason), who’s engaged to Nana. Unfortunately, that part of town is where Kit wants to peddle drugs. And what part does restaurateur and community leader Owen Davidson (Dave Bautista) have to play in all this?

Put like that the film may sound complicated or soap-operatic, but in practice it’s all very clear and sets up a plot that’s engagingly complex yet relatively character-centred. The story’s a function of individuals with relatable motivations reacting against each other, and develops accordingly. Those motivations are big bright primary-colour emotions: love, love of power, and revenge. The different relationships among the characters provide complexities and shadings to these motivations, and the variety of strands in the plot are woven with dexterity. If occasionally characters drop out of the film for a time — most notably Cheung’s young son — we don’t notice. 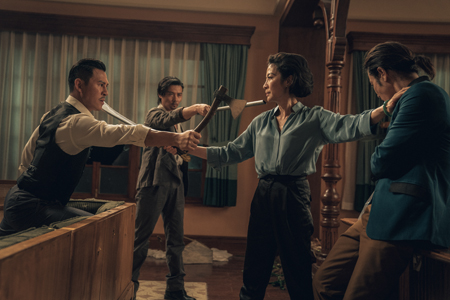 Most importantly, given the kind of movie this is, the story’s an excellent framework for setting up conflict, and specifically fight scenes. Those fights themselves are everything one might hope for in a Yuen Woo-ping movie. Each of them is an excellent set piece that does structurally what a set piece is supposed to do: sum up and advance character, theme, and story. Each has its own tone and its own mix of fighting styles, and its own location that plays into the fight. The movie as a whole is bright and colourful, and the fights in particular are beautiful (especially a wirework confrontation fought among the neon signs of a major street — which also incidentally helps set up the street as a location and the bright lights of the signs as a visual and thematic motif).

Zhang’s an effective lead, managing to hold our sympathy even when brooding and refusing to return to a life of violence. Michelle Yeoh is the most charismatic of the supporting cast, an excellent contrast to Zhang as she in her own way seeks to leave her past behind (and her fight scene is spectacular). Dave Bautista turns in another in a string of fine performances, to the point that I look forward to seeing him in a purely dramatic and non-combat role at some point. Tony Jaa is unfortunately underused, but does get at least one good battle early in the film.

Although connected to an established franchise and universe, there’s no real need to have seen the earlier films. Flashbacks get us up to speed, and no plot points that I noticed recur from the other Ip Man movies. It’s complete in itself, and if some of the character beats are familiar from other films, it’s overall original and distinguished. 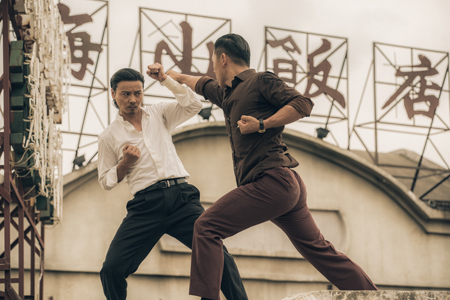 I’ll note that Kit, as pure a villain as the film has, is described as having gone bad in part because of his disability weakening him and his ability to fight for himself; I can imagine some viewers being troubled by this. It’s an interesting point, though, because it does somewhat subtextually emphasise the mixture of competition and admiration with which he views his sister. And it perhaps sets him up in contrast to Cheung, who is motivated in part by a desire to be a hero in his son’s eyes — amusingly, the son’s idea of heroism is summed up by a fictional caped American comic-book crusader called ‘the Black Bat.’

The British, meanwhile, here as elsewhere make good villains. Their corruption’s established early, and the movie does a good job of setting up the scale of the problem they represent: how the cops cannot be trusted, how they oppress the people, and how it seems they cannot be challenged. And then the movie unobtrusively sets things up so that at the climax they can be.

This is what I had in mind at the beginning with my reflections on the difficulty of assigning a single political reading to a work of art. When I saw Master Z it seemed to me to have a basic message of Chinese nationalism: heroes and the people of Hong Kong uniting against corrupt foreign occupiers and learning the power the unified citizenry has. Three weeks later, having been exposed to more articles about the currently-ongoing protests in Hong Kong, I’m struck that the film ends with the people of Hong Kong gathering in a massive street protest against police and a government occupying the city. To me, at least, there’s a political significance to the imagery that could not have been intended when the film was made. Times change quickly, these days. 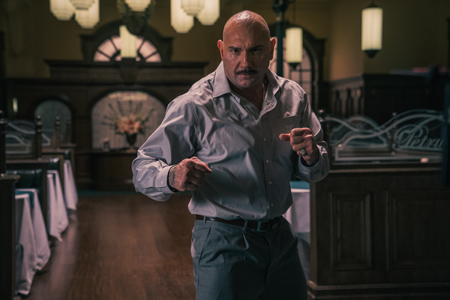 This is in a very real sense quite beside the point. Master Z is a kung fu action movie that is entertaining and willing to follow character where character leads. It’s an example of a master of a certain kind of storytelling telling a particularly fine story of its kind. Master Z doesn’t break new ground, but it doesn’t rely on cliché, either. It uses its conventions intelligently, and in so doing shows why these stories work. However you view the film, politicised or no, it’s an excellent example of its genre.