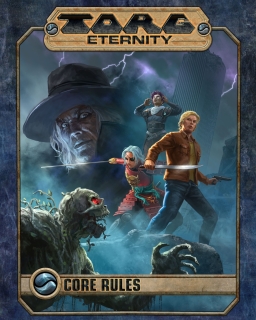 About a year ago I reviewed Torg Eternity, the reboot from Ulisses Spiele of the Torg tabletop role-playing game. I loved the original, one of the most wildly imaginative settings I’ve ever seen, and found the new version kept the best parts of the old Torg while making the mechanics smoother (I wrote up a session here). The game imagines our world attacked by other realities, each based on a different genre of fiction, which invade by making parts of our world operate according to their rules — increasing or decreasing the level of technology, adding magic or psionics or manifestations of the gods, and subtly encouraging people to behave in ways appropriate to their genre.

Now dinosaurs wander the jungles and mysterious ruins of the North American coasts. A cyberpunk theocracy’s taken over France. India faces colonial gothic horror. Splatterpunk technodemons in Russia have spawned a wasteland north of Moscow haunted by scavengers and monstrosity. East Asia sees zombies and bleeding-edge technology enveloped in espionage schemes. A maniacal pulp-era supervillain’s launched a New Nile Empire based in Egypt, opposed by masked Mystery Men. And in England and Scandinavia, wizards and elves and dragons are caught in a war between Light and Dark.

In the last year, two wildly successful Kickstarter campaigns have launched sourcebooks covering specific realms: first the lost-world realm of the Living Land, then the pulp reality of the Nile Empire. Now a third campaign has begun, for the sourcebook covering the fantasy realm of Aysle. I interviewed the Torg Eternity design team about the new book, how it approaches the fantasy genre, and what gamers can expect. 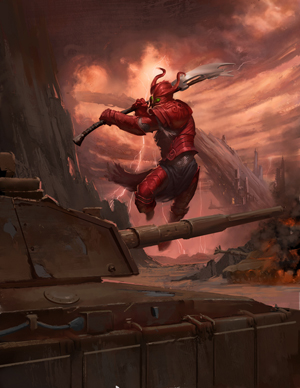 As I write, the Kickstarter for the Aysle sourcebook has just gone live, and blew past its initial goal in fifteen minutes. Different pledge levels give backers the chance to get the sourcebook and other materials — including adventure books — as digital files; get a physical copy of the sourcebook along with the digital files; or get a massive box of the sourcebook and everything being produced along with it, including the adventures, a GM screen and a soundtrack CD. One higher tier gives backers the opportunity to design their own character archetype for the game and play in a session with the designers at Gen Con; another tier gives backers the chance to get everything produced for the Torg Eternity line so far. Those new to Torg Eternity can also buy the core rulebook as an add-on with the Aysle sourcebook in this Kickstarter. Before going on to ask about the Aysle sourcebook specifically, I should ask: are the rulebook and the previous sourcebooks available elsewhere?

Deanna Gilbert, designer and writer: The “core” products and Living Land should be available through your FLGS now, and the Nile Empire products probably will start hitting shelves widespread in the next 1-2 months. [Those products include the adventure books, GM screens, dice, soundtracks — and card decks, vital for Torg Eternity.]

If you can’t get it through your FLGS, products are available at our webstore:

Turning to the sourcebook itself: the different realities in the game are both conscious evocations of a genre and also specific settings with their own distinctive feel. How do you balance that, making Aysle both familiar and individual?

Darrell Helmhurst, writer and designer: Part of it is Aysle needs to capture the feel of magical fantasy, but by the very nature of Torg it gets mixed with modern elements. So your party may be wizard, rogue, and then a movie star with a machinegun. Half the fun spins out of that. 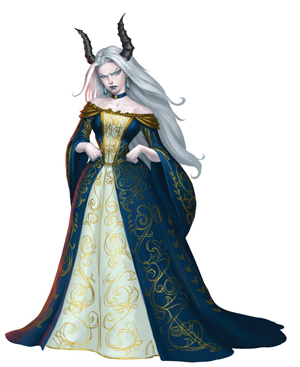 Did any novels — or films, since Torg is consciously cinematic — inspire this take on Aysle?

I really want to say Deathstalker 2, but that just isn’t true.

I’ve read that you wanted to make Aysle relatively straightforward fantasy so that gamers, most of whom have played Dungeons & Dragons at some point, would have a reality that’d feel like home — something familiar to them. I’ve also read that at one point early in the development process for Torg Eternity, you were considering doing a very different version of Aysle, more akin to Game of Thrones and grimdark fantasy. Could you say a few words about the back-and-forth of those two ideas and the development process? Was there anything in particular that made the familiar version of Aysle feel right?

The original version of Aysle had quite a bit of intrigue, but it never really came up because most of the party wasn’t from Aysle, so they weren’t connected to it at all. A big part of design is answering “what do we expect the players to DO during a session” and the answer was never “scheme against the great houses.”

I was wondering how you allocate space to, say, monster statistics and character outlines as opposed to general concepts? Did you want to structure things differently from the original Torg’s Aysle sourcebook?

The biggest change in focus was the original book delved quite a bit into the Cosm of Aysle [the home dimension of Aysle], which you never really go to, where we wanted to focus on the Realm (Aysle on Earth) and what that means here. We always start with story, and then make sure the mechanical elements support that on the table. 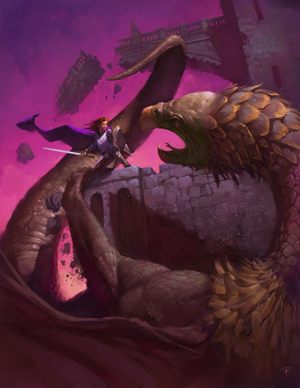 In putting the Aysle sourcebook together, did you view Aysle as needing more or less of a reworking? How did you balance updating the old reality against adding entirely new ideas?

Aysle wasn’t one of the most popular cosms, so we had considerable leeway, but it does have its fans. Our challenge was to bring people around and make them want to go to Aysle, while not alienating those that enjoyed the original.

What are you most eager to see gamers react to in the sourcebook and other materials, and what do you personally like the most, either in rules or in story?

We did some stuff with the Carredon [a powerful dragon in the Torg mythos] in the adventure [Revenge of the Carredon, a mega-adventure accompanying the Aysle sourcebook] that I’m really proud of.

The Torg Eternity sourcebook Kickstarters have had add-ons and stretch goals like adventure books, threat standees, maps, and various other things that get unlocked as the campaign goes on. Is there anything for this Kickstarter that you’re particularly excited to see out in the world?

We try to do something crazy and new with each Kickstarter. This time around it’s a dice tower modeled after the Ayslish stelae [anchor-points for the invading realities]. I think it’s pretty cool, and what better cosm to offer a tower for?

After the Aysle Kickstarter, what next?

Cyberpapacy is next, then Tharkold after that. The challenge, apart from logistics, is finding a pace that keeps our audience engaged, the story moving forward, but doesn’t kill everyone’s wallets [Deanna: or the design team <grins>]. We’re still working on it. 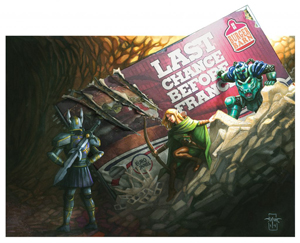 How has the Torg relaunch gone so far? I note that the Kickstarters have all massively exceeded their targets, that there’s an active community on the message boards, and that the game received an Ennie nomination (the Gen Con RPG Awards) for best rules. Is the reaction to the game meeting the developers’ expectations?

We honestly didn’t know what to expect, which is the main reason to Kickstart. This was a labor of love for everyone involved, so we’re totally thrilled that people are playing and enjoying it. The big goal was that this was a game that people would get to use, rather than one that just sits on the shelf. And in that it’s blown every expectation away.

Find the Kickstarter for the Aysle sourcebook here!