Last month I wrote a Vintage Treasure piece about John Wyndham’s 1953 novel Out of the Deeps, and while I was researching it I was reminded that Wyndham — one of the 20th Century’s most successful science fiction writers — got his start in the American pulp magazine Wonder Stories, edited by Hugo Gernsback, and Walter H. Gillings’ British pulp Tales of Wonder. Someone with authentic pulp roots like that deserves a lot more attention than he’s received here at Black Gate over the years.

Much of Wyndham’s early pulp fiction was collected by Coronet in two slender paperback anthologies in 1973, Sleepers of Mars and Wanderers of Time, and they look like a great place to start. Neither were reprinted in the US, so I was unaware of them until recently (like, two weeks ago). But thanks to the wonders of eBay, I was able to locate the copy of Sleepers above for a reasonable price ($11.33). That’s more than I like to pay for a vintage paperback…. but it was almost as old as me, and definitely in better shape, so I made an exception.

Both books had introductions by Gillings. Though it’s short (2 pages), I found his intro to Sleepers of Mars entertaining and informative, especially since it shows how the first story in the collection relates to Stowaway to Mars, one of Wyndham’s pulp-era novels (and perhaps not coincidentally, also re-released in paperback by Coronet in 1972). Here’s the relevant snippet.

In Stowaway to Mars, his second full-length novel (already revived by Coronet Books), he anticipated the universal excitement which might one day be aroused by the attempt to cross interplanetary space — by three competing nations, in the year 1981. The story relates the adventures of the crew of the British vessel Gloria Mundi, which alone completes a triumphant return to Earth. An American contestant in the space race makes a disastrous landing on Mars. What happened to the crew of the Russian ship Tovaritch, with whom the British astronauts had a brief, unfriendly encounter?

The first story in this new selection of the early work of John Wyndham, from the days when he wrote as John Beynon or John Beynon Harris (his real name), was intended to resolve this intriguing question. Though originally published as a sequel to the earlier novel, it is actually a separate story, in which Commander Karaminoff and his comrades discover the secrets of the mysterious red world and its perambulating machines.

In addition to the novella “Sleepers of Mars,” the prequel to Stowaway to Mars, the book contains four other long stories. Here’s the complete Table of Contents.

And here’s the inside cover copy. 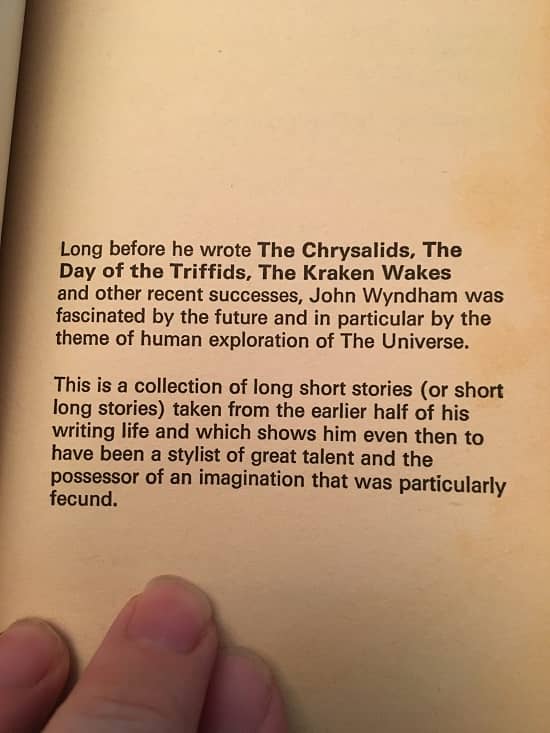 Inside flap copy for Sleepers of Mars

While we’re showing you all these cool covers, here’s Stowaway to Mars.

The second collection, Wanderers of Time, was clearly a good seller for Coronet. It was reprinted more than half a dozen times in 15 years, including an edition with an eye-catching wrap-around cover by Colin Hay (see below). 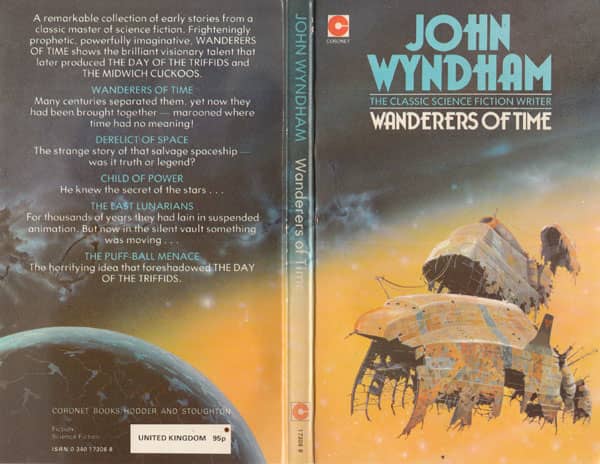 Copies of most editions are widely available online… which doesn’t make selecting which one any easier. I eventually choose the 1987 reprint from New English Library below (total cost on eBay: $6.80), partly because I liked the story descriptions on the back cover. It hasn’t arrived yet, but I’m looking forward to it.

Out of the Deeps
The Midwich Cuckoos
The Complete Carpenter: Village of the Damned (1995)