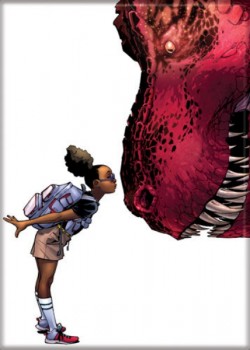 My son and I are travelling with my brother and his family. I have taken the opportunity to read with my 8-year old niece, who has virtually no experience with super heroics, although a few years ago, I did read several trades of Tiny Titans to her. 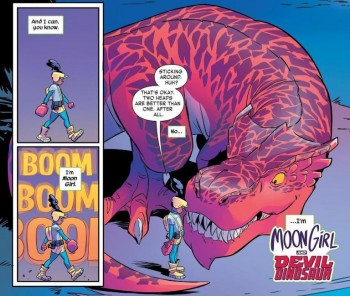 I was pretty sure that Marvel had a good selection of all ages books and decided to try Moon Girl and Devil Dinosaur before Ms. Marvel or Patsy Walker: Hellcat, which as it turns out are actually rated T+.

We are both loving it. Lunella Lafayette is a 9-year old girl living in the Yancy Street area of marvel’s New York, who not only has the regular problems with fitting in as an especially, exceptionally bright kid, but she’s worried about the roving cloud of Terrigen Mist. 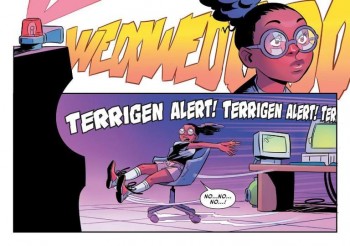 I don’t know how she found out she carries an Inhuman gene, but if I did and I was super smart, I would be terrified too. The not-fitting-in with brains fits and especially being told what to do and what to be in life resonates really well thematically with the prospect of the impending loss of control over her humanity. Also, the other kids call her Moon Girl because of her name. 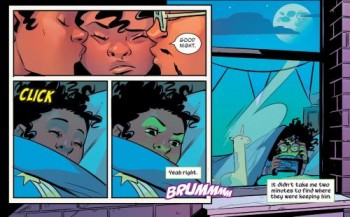 She’s actually constructed herself a makeshift lab underneath Public School 20 in New York and is good at sneaking out of bed to look for the cure to her Inhumanity. And one night she encounters a bunch of cave people and a strange Kree Omni-Wave Projector device that moved them from the distant past to the present. 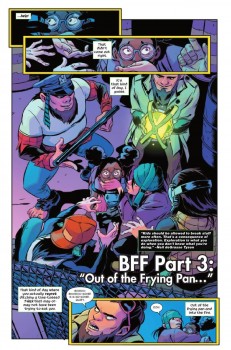 Now, it’s worth going back to 1970s Kirby Marvel to note that there was a comic series way back when called Devil Dinosaur, about a T. Rex with flaming eyes, befriended by a cave boy from the Moon Clan. 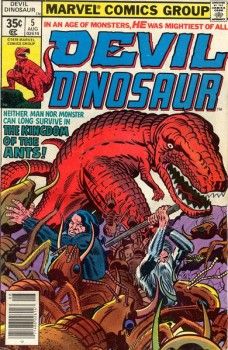 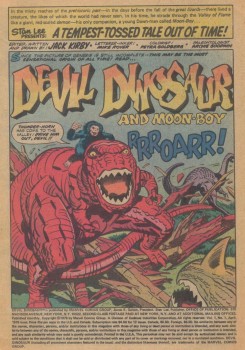 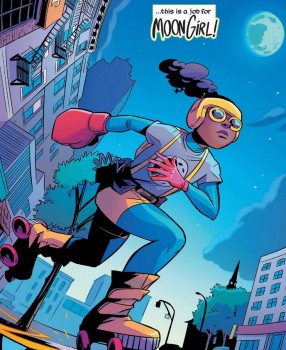 Hijinxes and misunderstandings and a growing friendship between Lunella and Devil Dinosaur blossoms. The cavemen in the present becoming a Yancy Street gang is awesome and Devil Dinosaur carrying Lunella around by her backpack strap like a big dog is fun. 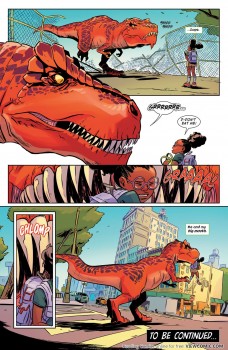 If I had to pitch this to an agent in an elevator, I would say “9-year old super genius befriends a Clifford the Big Red T-Rex and goes on adventures through the Marvel Universe.” 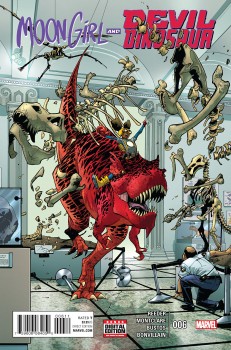 She meets Ms. Marvel, who ironically she almost fangirls over, gets a kind of Nemesis in a disillusioned and not-quite fitting in Kree boy who comes to capture her as an enemy combatant and falls in love with her (gross!, she says), the Thing, Amadeus Cho the Hulk, and Iron Heart. 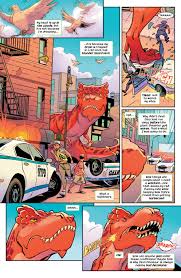 The art by Natasha Bustos is fantastic and pulls off the irony, humour, and adorableness demanded of the scripts of Amy Reeder and Brandon Montclare, who were hired by editors and Devil Dinosaur fans Mark Paniccia and Emily Shaw to come up with a modern day version. 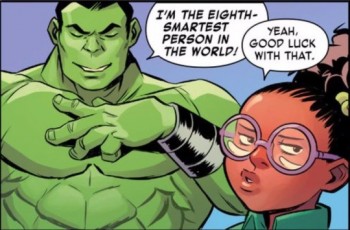 Some of the fun is also in Lunella awkwardly running contrary to superhero conventions by rejecting violence as a solution to most problems, which puts her at odds with her big, dumb dinosaur partner, and most of the Marvel Universe. 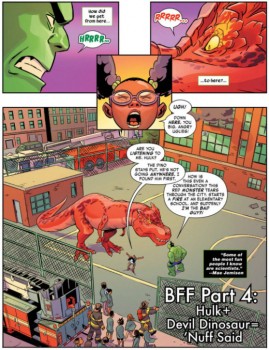 But the core of the story is of a girl looking to fit in and find her peeps, and in Devil Dinosaur she does find someone who has no expectations on her at all, and who accepts her for who she is. 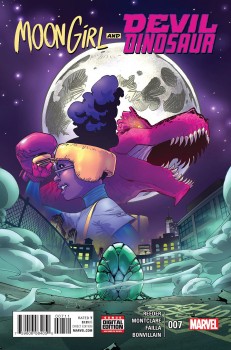 If you’re like me and you have kids in your lives who are 9-12 years old, I totally recommend you sharing this with them as a fun gateway to the Marvel universe. Some of the words are a little challenging for 8-year olds, but we worked through them, or I read the harder bits, and we enjoyed the adventures. If you’re not sure what to get as gifts, I’m sure the trades will be a hit.

Derek Kunsken writes science fiction, fantasy and horror in Gatineau, Quebec and likes comic books more than TV or movies. His first novel The Quantum Magician came out last year, but he’s been writing short fiction for magazines for over a decade. He tweets from @derekkunsken.

I do have that on my list…I have an eight-year-old daughter.

In the meantime, once you finish with those, try the Squirrel Girl compilations. They’re fantastic, and she truly is unbeatable. She has beaten Thanos, Galactus, Dr. Doom (several times, including in her first appearance back in 1991), and, sort of, the entire pantheon of Marvel superheroes and supervillains. The secret, of course, is that while she does have powers and will fight when needed, she usually wins by befriending people and finding out what they really need. She singlehandedly converted longtime Spider-man foe Kraven the Hunter into a good guy.

OK, you’ve convinced me on Squirrel Girl. That does sound amazing. I will give her a try. (And I don’t even HAVE a young daughter… my daughter turns 20 next month!)

Depending on her tastes, of course, I am nearly 100% confident your 20-year-old daughter would enjoy SG too. OTOH, my 8-year-old was already a huge superhero fan—and like me, primarily Marvel.

I’ve been musing with the idea of introducing her to Squirrel Girl, but my niece (like many children) doesn’t want to switch once she’s on to something. We’ll finish as much we can before our vacation is over, and then maybe try 🙂

> my 8-year-old was already a huge superhero fan—and like me, primarily Marvel.

My 15-year old daughter was primarily a DC fan…. BIRDS OF PREY especially. 🙂

Now that she’s 19, she acts too cool for comics. Except for manga, of course.

John: She started out on the Super Friends show, after seeing a newer Super Friends short in some app she had on her iPod Touch. And we are both *huge* Teen Titans Go! fans, and I’ve always been partial to Batman and entourage. Most of the good Batman movies aren’t quite 8-year-old-friendly though, while she has seen all the MCU and X-Men movies (except Deadpool and Logan from the latter—we’ll save those for when she’s older).

The story I always tell is that when she was about five, we showed her Big Hero 6. It has a lot of set up in the beginning, and about twenty minutes in she says, “When are they going to become superheroes like they showed in the ads?”