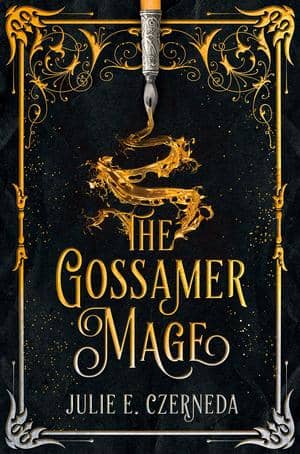 In the words of the great Mr. Spock, Julie Czerneda’s forthcoming novel The Gossamer Mage is fascinating.

To be fair, everything I’ve ever read from Julie is fascinating in some way. But Gossamer is a different brand of cool than either The Clan Chronicles or Web Shifters. Not only is it a jump from science fiction to fantasy, but it brings along the intricate detail and clever wordplay that you can find in any of Julie’s other works.

What mainly fascinated me here was the magic. I’m not the sort of reader or writer who needs a magic system to have strictly defined rules that can’t be broken and need to see explained in detail (although I enjoy that when it’s done well, like in The Dresden Files). What I definitely need, though, is magic that has consequences, so you don’t need to come up with complicated reasons to prevent mages from laying waste to every opponent. Julie’s presented a really cool brand of consequence: magic that siphons years off a mage’s life, aging them as they perform their works, in this case through ink and parchment.

She goes one better to make that aging somewhat up to the whim of the Deathless Goddess, to which (almost) every scribemaster gives their allegiance. And then on top of that, she’s layered a complex world built around the idea of mages who literally spend their life to achieve success. Scribemaster Saeleonarial, for example, worries that every new magical script will make him a decrepit old man, and looks down on young people who burn through that youth too quickly going after glory. There’s a vested interest in producing new mages through promoting powerful bloodlines, but the power to control that rests with the hold daughters, who represent the Deathless Goddess who allows magic to exist. And so on.

The other thing that fascinated me in Gossamer is the lyrical way that Julie’s constructed this novel. Breaking the story up between things like “Fundamental Lexicon” and “Dreadful Syllabus” is the obvious part of this. Less obvious until you start reading is Julie’s particular style of prose, which has always felt more literary to me than contemporary sci-fi/fantasy, making you work a little harder to understand the world through its characters’ eyes. I feel like Gossamer made me work a little harder than The Clan Chronicles or Web Shifters books, but between the intricate world and the complex plot, centered around hermit mage Maleonarial and his quest against the Goddess, the payoff for that work is more than worth it.

I think the best authors in our field push themselves in new directions, and I’m excited to see Julie doing that here. Of course, that makes her ever more slightly intimidating in her awesomeness, but I figure that’s worth it, too.

Like podcasts? Brandon has just launched a limited first season of “Broadcasts from the Wasteland,” where he and fellow author Evan May sit down for casual chats with other Canadian writers — including Julie Czerneda! Listen to her episode with Kevin Hearne plus other awesome guests right here: broadcastsfromthewasteland.com