The cover of the August, 1954 issue of Galaxy Science Fiction is “Hunting on Aldebaran IV” by René Vidmer. This was Vidmer’s only cover art for Galaxy. Although Vidmer had cover art on a few other magazines, the majority of his contributions were interior artwork. His art was published between 1953 and 1957 — a very brief career, which remains a mystery to me. I couldn’t find any personal information on him, unfortunately.

“Party of the Two Parts” by William Tenn — An intelligent villain from a distant planet steals a spaceship to evade capture. He lands on Earth, knowing he can’t be extradited by the Galactic Patrol unless he commits a crime against Earth. And when he does attempt a crime, it’s uncertain if it’s only a crime to his species or to humanity, leaving the Galactic Patrol in a conundrum.

Most of the characters within the story aren’t human, but they’re easy to relate to. I liked that Tenn provided part of the ending up front to set the story in place without giving away the entire plot. 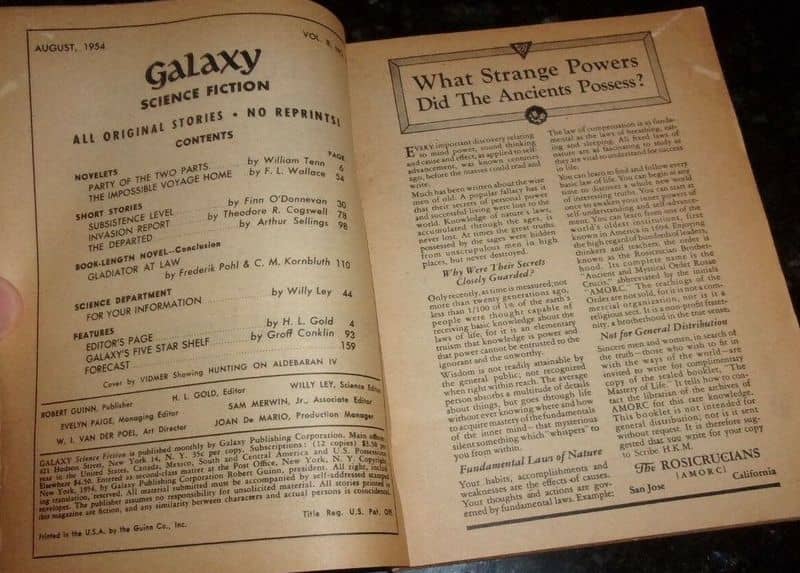 “Subsistence Level” by Finn O’Donnevan — Amelia went against her mother’s wishes when she married Dirk, who was a pioneer. Dirk and Amelia sell their farm and head for the asteroid belt. They settle on an asteroid and set to work making it a liveable environment, using robots to help with the farming. It’s tough work, but Earth was getting too crowded, and Dirk needs the open sky. Amelia knows who she married, but she can’t help but wonder if her mother was right – that Dirk isn’t someone who can ever settle down.

I really enjoyed the characters in this story and how the author brought an American pioneer setting into space. Finn O’Donnevan was a pseudonym for Robert Sheckley. I’m still astounded by the abundance of pseudonyms in the issues of Galaxy. And perhaps that’s more of a comment on the amount of pseudonyms used at that time. Or it could simply be one of those things that seems abundant because I’m looking for it (like people who share my first name). 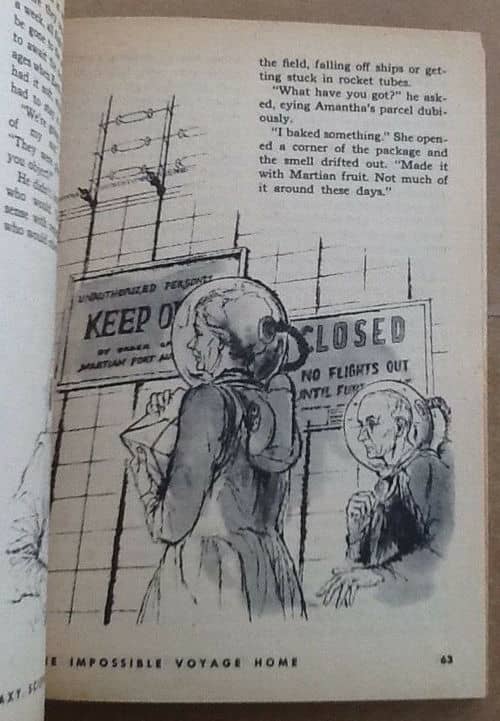 “The Impossible Voyage Home” by F. L. Wallace — Ethan and Amantha are retired on Mars. They want to visit their youngest grandchild on Earth; the young man recently married, and the couple is expecting their first child. But to travel to Earth, they’d exceed the safety limits for space travel. Ethan and Amantha reached the limits of radiation exposure through previous trips. The two decide the risk is worth it, if they can find a crew that will take them… or a ship they can take for themselves.

It seems like the majority of main characters in Galaxy stories are 30 years old or younger. It’s a refreshing change to have a story featuring older characters. Ethan and Amantha compliment each other well, as would be expected from a couple who has been together for so many years, and the plot develops nicely around them.

“Invasion Report” by Theodore R. Cogswell — Humanity went as far as Alpha Centauri but found no other life. Now, in the passing years, there’s relative peace among everyone, and the military ship that explored the Alpha Centauri system remains at rest. A “crew” boards her regularly – an unauthorized group of boys who pretend to have encounters with alien warships. It’s a fun game until they discover that humanity isn’t really alone.

This was my favorite story of the issue. I loved how Cogswell framed the game of the boys, making it seem like a real military mission until it became clear these were boys. Then the story transitioned into the silliness of their play (similar to the playing my three kids do all the time, though not aboard an actual spaceship). And finally the moment of dread when they have a real encounter and try to figure out how to respond. 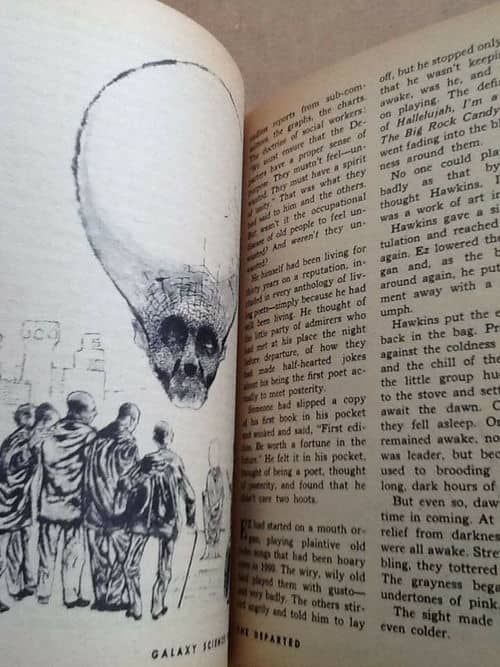 “The Departed” by Arthur Sellings — After a global war, much of the Earth is poisoned, preventing a growing society. The solution is to send groups of people into the future, scattering the population into various time periods in a similar way that groups used to be scattered into various land territories. Hawkins leads his group when they arrive into an uncertain, cold future. The one person they encounter won’t speak with them and seems oblivious to their presence.

The story didn’t go where I thought it might, so the ending seemed unrelated and confusing to me. I wish the author had explored more of the time-scattered society itself rather than encountering a person who won’t interact with the other characters. Arthur Sellings was a pseudonym (let’s all start watching for them now) of Arthur Gordon Ley, who had numerous short stories and six novels published. According to Wikipedia, he was also a scientific researcher for the British government. Unfortunately, he died of a heart attack in 1968 at age 47.

Gladiator at Law (Part 3) by Frederik Pohl and C. M. Kornbluth — Charles Mundin’s new associates have enough money and influence to find a doctor to reverse Don’s conditioning. After recovering, Don reveals where he hid the stock certificates, which gives their alliance a sizable percentage of G-M-L Homes but not enough to have the majority. To get shareholders to sell their shares of the company to Don’s group, Mundin and his associates need to go on the offense. As they begin making progress, they draw out their true, yet mysterious enemies — Mrs. Green and Mr. Charlesworth — who seemingly control everything and everyone. And they don’t want to lose ownership of the company, even if they must destroy Mundin and everyone he’s connected with.

Overall, Gladiator at Law is a good novel for its time. It has a decent pace with mixed points of view. Pohl and Kornbluth wrote three novels together. Search the Sky was also published in 1954. Their final novel together, Wolfbane, was serialized in Galaxy in 1957 and published on its own in 1959. Sadly, Kornbluth died in 1958 when he was only 34 years old. That particular day, he had an interview scheduled in New York City. Because of an earlier snowfall, he shoveled his driveway, which delayed him in reaching the train station at Levittown, New York. At the train station, he was running for his train when he suffered a heart attack, and he died on the platform. The interview he never had was with Bob Mills for the position of editor for The Magazine of Fantasy and Science Fiction.

In addition to the fiction within the issue, Willy Ley’s “For Your Information” article discusses a history of sending mail and packages through mortars and rockets. Though it never got farther than a few experiments, the idea had some merit in the late 1920s, given the speed of rockets. Instead, rockets became more useful for carrying explosives in war, and planes became fast enough to make same-day, transcontinental deliveries. 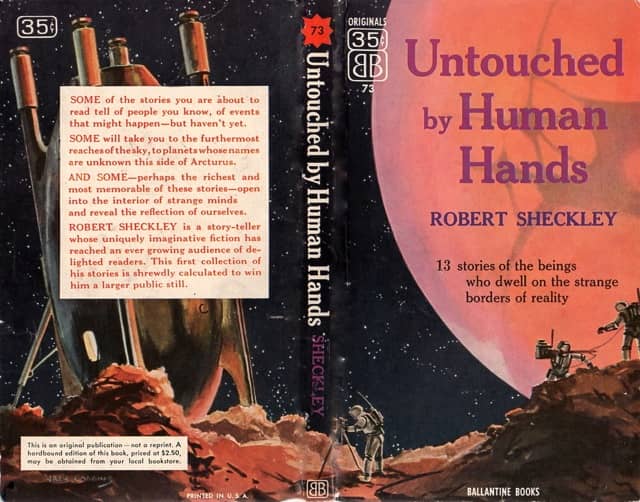 Groff Conklin reviewed multiple novels and collections in his “Galaxy’s Five Star Shelf” article. The review includes Revolt in 2100 by Robert Heinlein, Born of Man and Woman by Richard Matheson, Untouched by Human Hands by Robert Sheckley, and others. He writes of Matheson’s anthology, “For a young man whose first story was published in 1950, this collection represents a pretty solid achievement… they all bear the imprint of a distinctive and original talent.”

There’s generally nothing I like better at Black Gate than these retro-reviews. Thanks for one more!

And what nifty cover art for the Sheckley. I think it was imagery like that, that really got under the skin of some youngsters and moved them towards becoming sf readers for life.

This is the only copy of Galaxy that I own. A friend gave it to me as a gift because it was the month of my birth. I didn’t realize there was a Sheckley in it! Will have to go and look at it again.

Dale, thanks for the encouragement! I’m glad you enjoy them.

Dolphintornsea, yeah, authors are often hidden behind those sneaky pseudonyms! 🙂

In citing the the Pohl/Kornbluth novels, you left off the most famous, THE SPACE MERCHANTS, which Gold decided should be called GRAVY PLANET, a metaphor that really doesn’t work as well…also, they wrote at least four non-sf novels together.

A less factual typo in the FL Wallace ‘graphs, where the two older characters should complement at least as much as compliment each other…

Glad to see the review!

Todd, thanks for the correction. I actually read and reviewed Gravy Planet, so I can’t believe I blanked on that one!