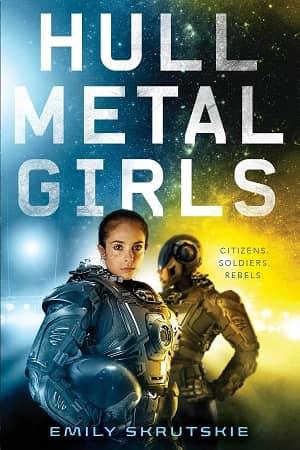 Only the most desperate try to become Scela warriors. That’s because few humans survive being fused with the robotic exoskeletons. Yet Aisha sits with thirty others, waiting for her turn, while the body of her mentor, ripped in half, is carried past on its way to the incinerator.

She knows she’s probably going to die. But this is her last chance to save her siblings. Her younger brother is dying of a wasting disease, and treatment is expensive. She’ll also do anything to keep her younger sister from working in the dyeing plant that killed their mother. So that’s why Aisha has signed on for the chance to become a Scela. She has never wanted to be a soldier for the State. But if she can survive the process of becoming a cyborg, her salary will be enough to support her family.

The surgery is even worse than she’d imagined. But when she wakes, the full truth hits her – she hasn’t just signed away her human body. She’s also surrendered her mind. The exo seems to have a will of its own. And since the Scela fighters are literally the hands the State, the authorities can override her will at any time. She’s nothing but a tool, a drone. She can no longer control what her body does.

Of the thirty people in that waiting room, only Aisha and three others survive. It’s hard enough for each of them to control their own bodies individually. When the trainer flips a switch, yoking their minds together, all four are suddenly four places at once.

Aisha’s new teammate Key’s mind has been destroyed so badly, she can’t even remember why she signed up to become a Scela in the first place. Since she’s from the upper class, it makes no sense that she would risk her life to do so.

The only boy in the squad, Wooj, was caught in a felony and forced to become a Scela. While he managed to survive the procedure, there’s something wrong with his exo. Sometimes, it’s too loose. Others, the robot eclipses his humanity completely.

Praava’s life doesn’t matter. Only her older sister’s does. Praava knows her sister will solve the puzzle of the wasting disease and save humanity, but only if she has enough money for her research. That’s why she went under the blade.

With their vastly different backgrounds and agendas, these four will never be able to work together. Except they must, if humanity is going to survive.

Emily Skrutskie’s Hullmetal Girls is a YA deep-space adventure in which the last humans search for a new planet on a fleet of starships grouped by caste. She has assembled a diverse cast of characters that will evoke sympathy in both young and mature readers. Expect badass girls doing hair-raising feats of incredible strength. The pages fly.

Skrutskie is also the author of The Abyss Surrounds Us, reviewed at Black Gate  here, and The Edge of the Abyss. Delacorte Press released Hullmetal Girls in July 2018, and both the Boston Globe and Paste Magazine named it a Best Book of the Year. Current rates are $9.99 for the ebook and $17.99 for the hardcover. Point your browser here to read an excerpt.