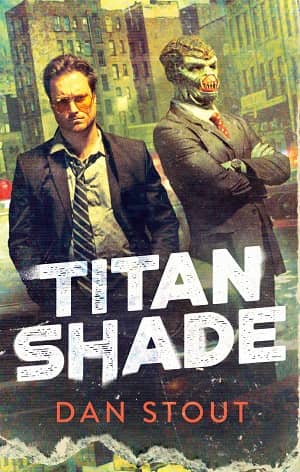 Jake Peralta and I have something in common: a deep love for Die Hard. That was what got me into cop-centered stories (moving on from Pokemon and Power Rangers), leading me to the likes of Lethal Weapon, Nash Bridges and more. The reason I still love those stories is because of the focus on a dysfunctional, imperfect hero trying to grapple with internal and external pressures, and sometimes not handling them very well. That’s part of why one of my favorites shows of all time is Fringe – none of the characters are perfect, they all have demons, there’s a procedural element, and it’s a weird-frightening-amazing science fiction show.

Dan Stout manages to give the procedural a fresh twist with Titanshade, which centers on police detectives in a northern town trying to transition from oil to renewable energy, in a world populated by humans and other races. The cover looks like a rehash of Bright, which is just unfortunate timing, apparently, since this novel sold to DAW earlier. More importantly, Stout’s story is way more original and engaging (though I actually enjoyed Bright). It’s not just orcs and elves running around with humans; it’s Mollencampi, with multiple mouths and an array of expressions using their pincers, and Gillmyn, sort of like bipedal whales who more easily adapt to Titanshade’s cold. Oh, and they aren’t running around what’s basically present-day Los Angeles with fantasy creatures thrown in; Titanshade is built around a mountain formed from a dying god whose lifeblood gives the community heat, which is good since the material component for magic is running out even faster than the old oil reserves.

Between the 8-track players, disco music and pagers, the rampant police politics and focus on a detective past his prime paired with a young go-getter, Titanshade reads a lot like a love letter to shows like Miami Vice or Hawaii Five-0. But at the same time there’s a ton of nuance and breaking of traditional molds. Carter, our past-his-prime detective, is far from a carbon copy of Martin Riggs or Sonny Crockett, and the problems he and his partner Jax deal with are more X-Files than Blue Bloods. Limiting magic makes it a subtle tool throughout this novel, but a crucial component for the story, and the focus on moving away from oil makes me wonder if we can classify this as a solarpunk story (or maybe solarpunk-adjacent?).

Either way, if you’re a fan of any of the shows or movies I’ve mentioned so far, read this novel. Dan Stout kicks ass with this debut, and when I hear news about his next book, expect a loud “Yippee ki-yay.”

Like podcasts? Brandon has just launched a limited first season of “Broadcasts from the Wasteland,” where he and fellow author Evan May sit down for casual chats with other Canadian writers. Listen to guests like featuring Derek Künsken, Kelly Robson, Marie Bilodeau, Tanya Huff, Jay Odjick and more right here: broadcastsfromthewasteland.com