Last time I wrote about Thomas M. Disch I got a cranky note from Michael Moorcock, taking me to task for calling him a “tragic figure.” Fair enough. He’s not quite as forgotten as I made him out to be, either. There are still people whispering about Thomas Disch in dusty corners of the internet, if you know where to look.

Me, for one. Disch is a fairly recent discovery for me, I admit, and I probably would never have tried him if it hadn’t been for a few lone voices out there still championing his quirky brand of SF, including Rich Horton, Ted Gioia, and Jo Walton. It was Jo who helped pique my interest in his 1979 novel On Wings of Song, with her 2011 review at Tor.com.

It’s a fascinating complex world. There are machines which you hook up to and sing sincerely, and if you do it right you have an out of body experience. They call this flying, and it’s banned in the same way that drugs are banned — illegal but available… There are famines when rations get cut to starvation levels, and prisons where you have to get McDonalds takeout to survive…

We don’t seem to have a word to describe the kind of story this is. It’s the whole life story, from age five to death, of Daniel Weinreb… He wants to fly, he wants it more than anything. His life is complicated and largely unheroic, the kind of life people actually have in reality and seldom have in fiction. But it’s a life he could only have in that time and place, in the world he lives in. It’s a book about how he grows up and what happens to him and what he wants and what he has to do to get by.

On Wings of Song was a Hugo nominee, and won the Campbell Award. But I’m certain I would have bounced off it when it was first published. In 1980 I was discovering Roger Zelazny, Robert A. Heinlein, and Stephen R. Donaldson, and busy falling in love with the sweeping adventure epics SF had to offer. I was just one of the many science fiction readers who ignored Disch completely. Definitely my loss.

I’m trying to make up for it now, of course. Most of my recent efforts have been focused on his short fiction. But I was fortunate enough to come across a copy of On Wings of Song in a recent set of 31 paperbacks I bought on eBay for $19.95. 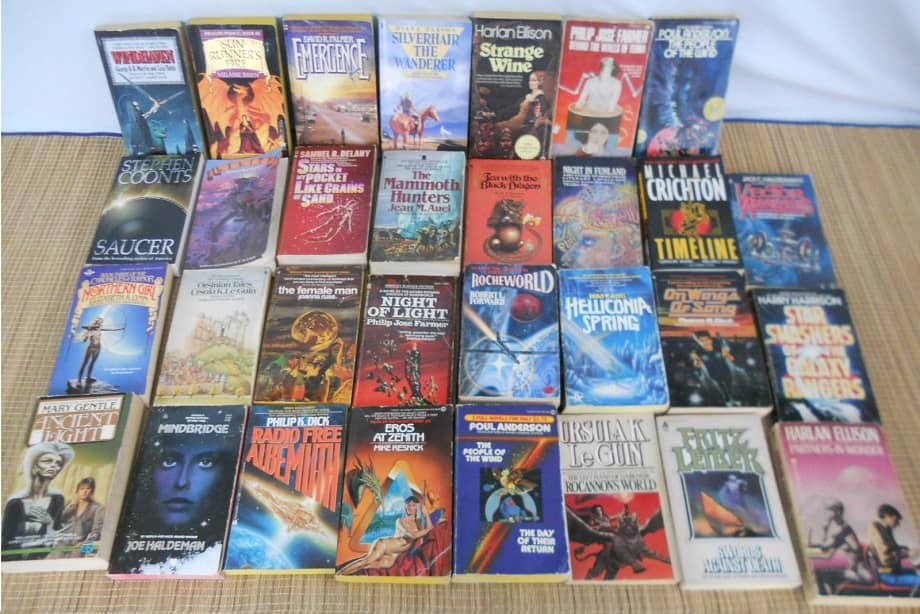 (For my fellow paperback zealots in the audience, here’s a closer look at the books above. No, they’re not for sale.)

Despite all the tantalizing titles in that lot — including books by George R.R. Martin, Poul Anderson, Samuel R. Delany, Philip K. Dick, Mary Gentle, Brian Aldiss, Ursula K. Le Guin, Fritz Leiber, Joe Haldeman, Joanna Russ, and many others — the one that jumped into my hands was On Wings of Song. I chiefly credit Rich, Jo, and Thomas Parker for sharpening my interest in Disch. Thanks, guys. I’ll let you know if it bounces of me this time.

On Wings of Song was published in hardcover by St. Martin’s Press in 1979, and reprinted in paperback by Bantam Books in August 1980 with a cover by Lou Feck, and again in 1985 with a cover by Kid Kane. My 1985 paperback is 359 pages, priced at $3.50. It has been out of print since the 2003 Carroll & Graf paperback reprint. Chu Hartley Publishers began offering a digital edition in 2016.

A Cherished Contributor, and Hard to be Friends With: Michael Moorcock on Thomas M. Disch
When Philip K. Dick Reports You to the FBI: Thomas M. Disch’s Camp Concentration
Thomas M. Disch on the Best Science Fiction of 1979