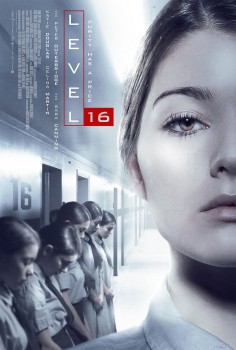 Last week, I headed out to the Mayfair Theatre in Ottawa (Canada) for a screening of the film Level 16.  An aside, the Mayfair is a quaint little theater that has been in operation since 1932. The interior doesn’t seem to have been changed since it’s early days, and the in-house film graphics haven’t changed since the 70’s, I’m certain. Anyway, I figured I could turn the visit into a film review. For true transparency’s sake, I have to state that my flatmate and good friend worked on this film. I guarantee you, though, that I’m being as impartial as I can about it.

Level 16 is a sci-fi thriller (stronger on the thriller than science fiction, though there is enough of the latter to qualify, even if it’s mentioned only briefly) set in a “post-apocalyptic” world (there are reasons for those quotation marks, I promise you). From IMDB:

Sixteen-year-old Vivien is trapped in The Vestalis Academy, a prison-like boarding school, keeping to herself and sticking her neck out for no one. Until she is reunited with Sophia — the former friend who betrayed her. Together the girls embark on a dangerous search to uncover the horrifying truth behind their imprisonment. Soon running for their lives, the girls must save themselves or die trying.

This is a female-led production; a female writer and director (Danishka Esterhazy) with female leads, Vivien and Sophia, brilliantly portrayed by Katie Douglas and Celina Martin respectively.

Created on a low budget, this film is masterful in keeping the viewer interested, despite a lack of expertly choreographed fight scenes or flashy special effects. I was rooted to the seat the whole way through, to the point that I didn’t move, and my previously broken tailbone began to ache. The film artfully uses color, or rather the lack of it, and pacing to draw in the viewer, immediately giving an impression of what is going on.

The air outside is poisonous, the environment destroyed. Life from the beginning for these young woman is entirely indoors. They dream of seeing the moon. While living in this institution, the young women are instructed in the feminine virtues (purity, obedience etc). It is immediately pressing how these taught virtues so accurately imitates and distorts the ideas of femininity espoused by the world in which we live. It is an oppressive view of femininity and the place of women that rivals The Handmaid’s Tale in tone. The promise is, of course, that if they remain obedient and pure, they will be adopted into wonderful families.

This is, of course, not reality. It is not until Vivien and Sophia are reunited that Vivien becomes aware of what is truly going on.

I utterly adored the portrayal of the two young women in this film. Both were strong, but in vastly different ways. Vivien’s strength was far more aggressive, tougher than Sophia’s. Yet there is steel in Sophia’s gentle countenance, and a selfless courage that Vivien does not possess. When given the choice,  just steps from freedom, Vivien does not opt to aid the other girls. It is Sophia who returns to the school proper in an effort to help the others.

It’s not until Vivien discovers the fullest, terrible truth that she returns to help and even then it feels less like altruism, as it is with Sophia, and much more like retribution. From then on, she takes charge, leading the fight for freedom.

Strength and courage have very different faces, and it was refreshing to see a couple of the different ways these may manifest in different people. Not every hero throws punches, in other words. 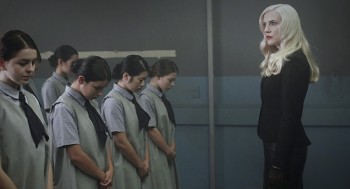 The women in this were, perhaps not surprisingly, given how female-led this film was varied and whole. They weren’t at all a cardboard cut-out of what someone thinks “being female” is all about. Some were victims of years of conditioning. Some were vicious and cold. Some were warm, and uncertain. It’s nice to see on screen when so many other films (indeed, so many other forms of entertainment) fail in this regard.

For some, the ‘education’ the young women receive may be a little on the nose. For many others, who are perhaps more cognizant of certain camps of thought regarding their person, it might hit a little too close to home. For me it was the latter, and I could feel my blood heat as it hit all of my rage centers.

Even though the film provides commentary on this, it actually is not the only critique of the relationship between femininity and the world on offer. I shall leave it to those who go see the film to figure out the other things themselves, as discussing them here will be heading into spoiler territory. I would like to avoid that if possible.

I will say that I foresaw the film’s twist well before it hit, but that might simply be because I am particularly sensitive to the issues portrayed by this film. I have heard others exclaim horrified surprise.

Also, the focus on friendship in the film is something I greatly appreciate.

There is so much more I’d like to discuss with regards to this film, including themes of abuse (of all varieties) andinternalized misogyny, but that would turn this post into a dissertation. No one has time for that!

This film is fantastic. It’s intriguing and tense, beautifully acted, sometimes sickening, and the ending was genuinely satisfying. I believe this film was under limited release, and should probably be available for renting currently. I can truly say it’s worth hunting for.

Have you seen it? I’d love to hear what you thought of it.