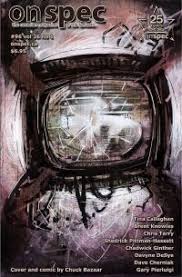 As promised, readers, I’ve got a few more interviews coming down the pipe this year with writers and editors in the SFF community. Recently I had the opportunity to chat via email with Diane Walton, managing editor of On Spec Magazine, after meeting her in person at Can*Con. Had a blast digging into her past and the history of the magazine. Check it out below!

Brandon: This is going to sound like a slightly generic question to start, but it genuinely interests me. What first got you into science fiction and fantasy? Was there a particular work or author that hooked your interest, and when was that?

Diane: It sort of began in Grade 7. The kids in my class all seemed to be voracious readers — the girls had their Nancy Drew and Trixie Belden and Dana Girls mysteries, while the boys had Hardy Boys and Tom Swift. At a certain point, we just naturally began to trade books, to get a fresh supply. So I kind of started reading SF with Tom Swift by default.

Interestingly enough, at that time, there was no stigma of the “these are ‘boy books’ and those are ‘girl books'” kind. We were equal opportunity readers.

The following year when I was 13, my family moved to a new community, the charming city of Belleville, ON.  My dad and I both took out library cards at the branch down the street from our house, and made a once a week jaunt to get the 8 books we were each allowed.

I can’t recall precisely when it happened, but one day I was bored with the “girl and her horse” stories, and so I curiously picked up a book with a rocket ship on the cover. The author was Andre Norton, and the book was called The Stars Are Ours!

I was immediately hooked. Read every Norton title in the juvenile section of the library, moved on to reading some guy named Heinlein, and then just kept on going until I was eventually reading books I got from the Adult section (with Dad’s permission). Clifford Simak was a favourite. Plus Ted Sturgeon and Isaac Asimov, of course. Lots of the classics. I discovered Anne McCaffrey in high school, and read everything I could find in the Dragon series.

I was also into murder mysteries at the same time — Agatha Christie and such. And I was watching TV– Twilight Zone, The Outer Limits, and Lost in Space, and ultimately Star Trek.

Do you think things would have gone differently if you had grown up surrounded by a stigma of “boy books” vs “girl books”?

That’s hard to say. I suppose if there was a lot of pressure to conform, it might have affected my reading habits, and I already did read the usual “girl” books simply because I enjoyed them. We were just in a unique Grade 7 class that shared an enjoyment of reading that was pretty much gender-neutral. And even outside of school, I tended to read outside my gender, simply because I saw what my father was reading, and things like his James Bond books intrigued me, especially after I found his “stash” in the bureau drawer!

I didn’t know you’re a James Bond fan! Books and movies? Any influence on your tastes as a reader or editor?

Can’t claim to being a real JB fan. But when you are 13 and desperate to read any grown-up book that you have access to… well… do the math <g>. I read most of those books during Ian Fleming’s lifetime (yes I am that old), and I only read his books — not the ones written by others since his death. I suppose it was the science fictional aspects of the books that appealed to me at the time. Lots of cool gimmicks and gizmos. I don’t think I have seen all the movies, although it’s fun to check out a new actor playing the role. I was really hoping for Idris Elba. Sigh.

I’m still holding a torch for Idris Elba as Bond… So when you were first getting into your managing editor work with On Spec, what were the science fictional aspects that really excited you? 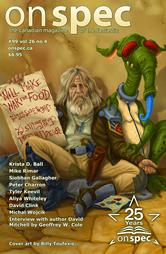 story from an “old” voice, and giving the authors the opportunity to see their work in print. I love the moment when I say, “We have to buy this before someone else does.”

As far as science fictional is concerned, I’m not really as much of a science dweeb as Barb and Ann are, for example. I appreciate a good futuristic tale where there is believable physics and biology and chemistry, but for me, it’s always the characters that grab me. Even the non-human ones.

Some stories just stick with me for years after I’ve first read them, and that is the strength of short fiction.  And that’s why I keep doing this job.

Any particular stories you’ve read over the years that have stuck with you? And if so, why? And is there a particular kind of character that grabs you, beyond just a character that’s written well?

So many! First and foremost, “Muffin Explains Teleology to the World at Large” by Jim Gardner, just because it is charming and quirky and has a child protagonist who is amazing and not irritating.

A story we use in our teacher toolkit is “Space Monkeys” by Ryan M. Williams, and if you are a parent, I guarantee tears at the end.

“All Them Pretty Babies” by Camille Alexa won our Apocalypse Issue contest, and when I read it in the slush, I was at our very first editors’ retreat. We were all sitting around reading stories on our tablets, and I made everyone drop what they were doing to read this story. It was just that good.

I think what grabs me is the character who is living under seemingly impossible conditions, and yet rises above them to achieve their goal. There are more stories that stuck with me, some for 20 years or more, but I’d be at this all day, just remembering them!

The Apocalypse issue is so good! [For readers’ benefit, I bought a back issue copy from Diane at Can*Con in 2017.] How did that issue come about, by the way?

The Apocalypse issue for a theme was Jen Laface’s suggestion as we were nearing the end of the century. It just seemed appropriate.

Post-apocalyptic fiction seems to have had a long heyday. Any thoughts on its ongoing popularity vs the push to move on from it, with subgenres like solarpunk or more optimistic ecofiction? 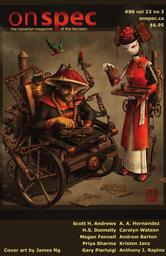 Both writers and readers, I think, are influenced by the political landscape that surrounds them, especially in the current administration to the south of us. And SF has always had a strong contingent of “if this goes on” themed stories. We can’t help it. I recently read a commentary on post-apocalyptic fiction that said we like it because we try to imagine what we, ourselves, would do if placed in those daunting circumstances.  Post-apocalyptic fiction is a perfect vehicle for a writer to bring out both the best and the worst of human nature, because we all react to circumstances based on our level of self-interest or our devotion to family and community.

Have you read any of Steve Stirling’s books of The Change? If the same thing happened, how many of us would be likely to survive? I love the idea that a small community of SCA members would have the necessary skills to band together and thrive when there’s no electricity and machines won’t work.

I rarely read zombie apocalypse fiction, but I recommend The Girl With all the Gifts (the movie, too).  It resolves in a most unexpected way.

Do you think post-apocalyptic fiction can still be fresh and surprising, though? Or is it too much a response to current political, social or environmental conditions?

One always needs to be optimistic about any new fiction. Good writers can take old tropes and make them fresh. I guess for me, the thing with P-A fiction is just how much the author decides to make their characters suffer. I don’t like books that are just way too relentless and preachy in their making of any particular point. But P-A fiction is also a very good way to show heroic acts of self-sacrifice and devotion to others.  They can be uplifting even when the rest of the landscape is bleak.

I understand Chuck Wendig has a post-apocalypse book coming out called Wanderers in 2019, and it’s on a list of 50 most anticipated books:

I love Chuck’s prose, and so I look forward to seeing what he can do with this sub-genre.

Want to know what’s upcoming from On Spec? Check out their website or follow Diane and On Spec on Twitter. Their latest submission call recently closed, so I’m looking forward to more exciting issues later this year.

Thanks again to Diane for taking the time for this interview!