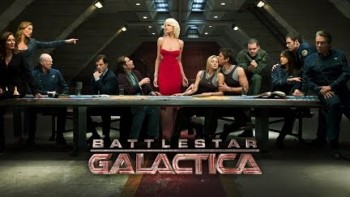 One of the most fascinating crosses for me is when science fiction and religious faith hang out. Star Wars is deeper for the faith of the Jedi. Worlds like Altered Carbon are starker and more desolate with their utter materialism. One of my favorite mixes of science fiction and religion is Battlestar Galactica, both the original series with its angels, and the 2003 reimagining with its robotic religious zealots. 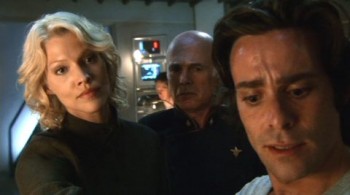 The premise of the show is pretty simple: humans living in a solar system far away made robots (Cylons) as smart as they were and war happened. The war was a draw, and the Cylons disappeared for 40 years. Open credits on the pilot and… the Cylons return, and wipe out all of humanity except for about 50,000 people who happened to be in some ships at the time of the attack. How did the Cylons do it? 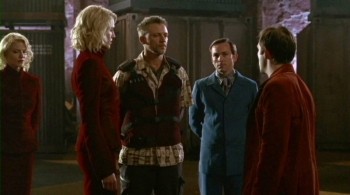 In the opening, it is revealed that the Cylons have engineered new models to look human. The shiny models are still around, but the human-looking Cylons have returned with a religious fervor to settle scores with those who created them. There are twelve models and there are multiple copies of each one, some infiltrated into the escaping fleet. 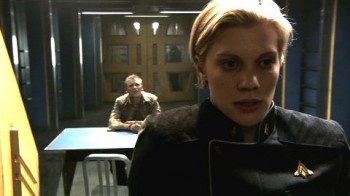 Instead of the polytheistic-agnostic-lite practiced by many of the show’s human characters, the Cylons believe in the one true god with the conviction of the most religious people we may have encountered in our lives. They quote human scripture, argue points of theology and philosophy because these robots believe in their god.

For a North American, western, largely secular audience, this kind of reasoning from revealed truth can be a little unsettling. But because these Cylons-who-look-like-humans know so much about the humans they are chasing, they can exploit weaknesses and insecurities, unbalancing not just the heroes, but the audience.

One of the best of these in season one is the Cylon Number Two, Leoben Conoy, who tries to get under the skin of Commander Adama and successfully gets under the skin of Starbuck as she interrogates and tortures him. He gets far more potent as a psychological adversary in later seasons, but I’m only talking about season one right now. 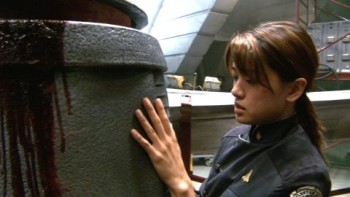 The writers don’t just mess with the human characters’ heads, though. Not all the Cylons know that they’re Cylons. They can have false memories and latent programmed missions, like Boomer (pictured above), which can give them weird and disturbing insights that they may try to explain off as stress, mental imbalances and so on. This not knowing is a huge tension-generating tool that I’ve mostly seen in horror, like when we didn’t know if the dad was crazy or if the hotel really was haunted in The Shining.

The whole scary uncertainty as to whether religion is real or not gets amped up when the president starts getting visions that turn out to be parts of a prophecy from two thousand years before. The “this has all happened before and will all happen again” line that the Cylons keep quoting gains a lot more strength. And when the president embraces her faith to make strategic decisions about the welfare of the fleet, people get divided into camps based on religiosity. 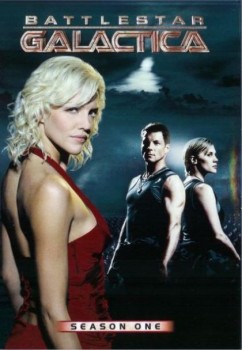 The most powerful and omnipresent manifestation of this “is it real, or am I crazy” problem is in the deeply flawed and very selfish character Baltar. He hallucinates Number Six (a beautiful woman Cylon) constantly. No one else sees her and he could properly conclude that he’s nuts, except that some of what she tells him is true, which helps him survive. The only problem is, she’s constantly trying to convert him to her religion, which goes completely contrary to his scientific worldview. So, he has to conclude that she is really some kind of a spirit visiting him, or that he’s crazy, or that he’s a Cylon.

Science fiction’s power is to set up world where moral questions can be asked, where thought experiments can play out, where our choices can be simulated and our own actions in the present can be examined. The heavy dose of religion in Battlestar Galactica turns a lot of the arguments we might normally take for granted on their heads.

I’m going to keep on watching. If you haven’t watched Battlestar Galactica yet, you should check it out!

Derek Künsken writes science fiction, fantasy and sometimes horror in Gatineau, Québec. His second novel The Quantum Garden is already serializing in China, and will be out in English in October, 2019. His first novel, The Quantum Magician, is in bookstores now.

Have you ever read James Blish’s A Case of Conscience? One of the best of all SF dialogues between faith and science.

I bought the box-set of the entire series (just before the final one came out) and really enjoyed it. It packed a genuine philosophical punch, although it fudged some core issues later in the series – e.g. I thought they were going somewhere really interesting by having Baltar become the leader of some cult, but that story line just seemed to fizzle out. The other issue was Starbuck’s death and reappearance. Apparently there were a couple of religious analogies, apart from the obvious (e.g. Starbuck as one of the holy trinity, specifically the Holy Ghost) but the series never committed one way or the other, or indeed, offered any sort of explanation, religious, empirical or whatever.

I am a die hard BSG fan, from the original series. Loved the re-imaged series although would have like to see more of the original “toaster” Cylons knocking about.

The religious crossover at times got a bit much but I think you have a point there Derek, the Cylons have been the best kind of understudies and have come to supplant their masters, in so doing forcing a huge amount of deep questioning.

Hey Tony: Yes – I just watched the pilot to the Caprica series and in it, we see very clearly the origin of the Cylon monotheism, from a human religious splinter group. A bit creepy seen in context of the way the 4 seasons of BSG played out.

Hey Aonghus: Agree as well – I think the plotting of the series was remarkably cohesive for seasons 1 and 2, and there’s a decline in season 3 and for season 4, you just have to accept a few plot holes as the price of entry to the spectacular finish.