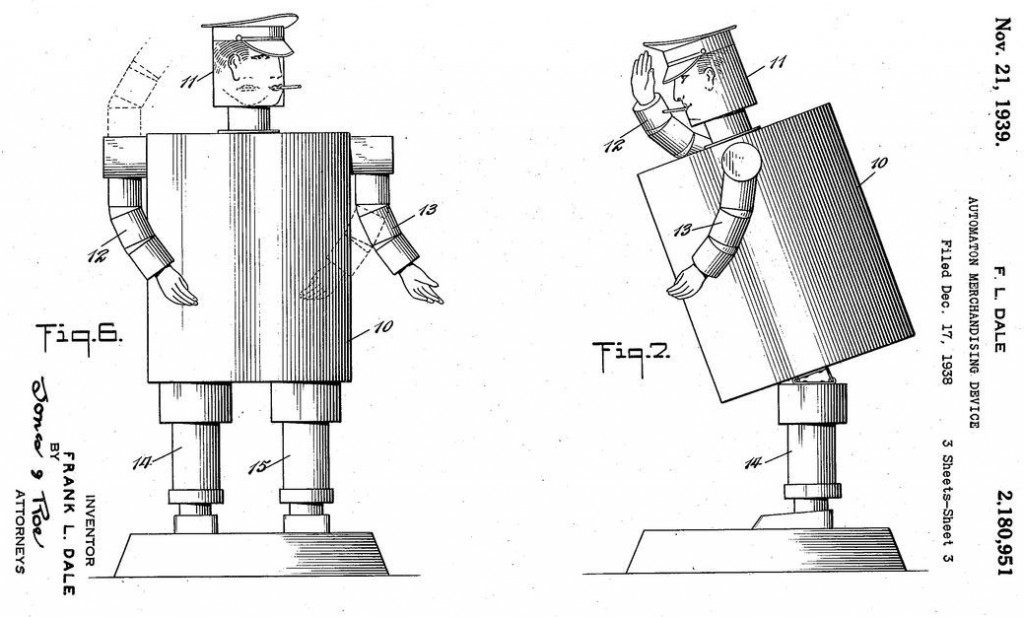 You can’t get your science fiction merit badge without knowing that Isaac Asimov’s robots were made by the fictional U.S. Robots and Mechanical Men, Inc., founded in 1982, the same year Susan Calvin was born. (Yes, that means she’s a millennial. She joined the firm in 2008, if it comes up in a trivia contest.)

When people see the name of the firm they immediately start to wonder what the difference is between a robot and a mechanical man. Some people. Me, mostly. I’ve never found anybody else asking the question. But I can’t tell you how much it bugs me. If a company has both names it must make both things. Yet nowhere in I, Robot or The Rest of the Robots does Asimov so much as mention a mechanical man or differentiate his robots in any way. Robots by the score but no mechanical men or for that matter mechanical women.

Others did. He probably didn’t know it at the time, but Asimov was scooped. A real world firm had been started in 1938. Its name was Mechanical Man, Inc.

Frank Dale was born in the tiny hamlet of Dale, MO, around 1897. No coincidence there. The town was named for his father, who claimed the land after coming by wagon train from Indiana. He was a blacksmith and ran the general store and post office. Probably all you need you know abut Dale, MO, was that its founder couldn’t make a living there. It no longer exists, although a township has that name. When Frank was five the family moved to Prosperity, MO, a place better described as a crossroads rather than a town. He attended high school in nearby Webb City, where he’s a member of their Hall of Fame. They laud him as having “Invented artificial hands, disposable charcoal grills, insoles for shoes and scale model training devices used extensively during World War II.” 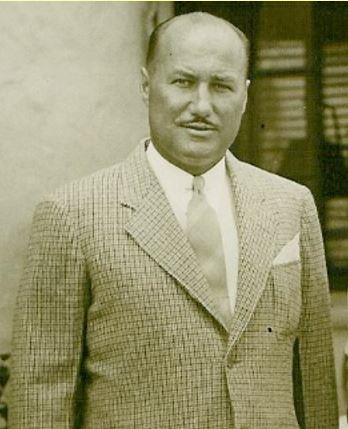 He moved to the big city, or at least a suburb of one, Pleasantville, NY. (From Prosperity to Pleasantville. What does that say about American town naming?) His father had wanted him to work with his hands than go to college, and apprenticed him to a mechanical and steam engineer. Frank grew up puttering with the odds and ends he amassed. True to American inventor mythology one day he put together the “tin cans, mop pails, tobacco containers, a section of stovepipe, a cooking pot and a rusty oil drum” he found in his basement and created a mechanical Frankenstein. It turned on him, so to speak. An arm fell off and beaned him.

When his wife became ill, he quit his job and they moved to Florida. In good entrepreneur style, Frank thought his tin man would make for an attraction, especially after he fixed the faulty shoulder and installed a motor to raise an arm and beckon passers-by. He rented him out to a series of service stations and motorists stopped as if magnetized. Frank earned so much money he decided to return to New York and create a company based on his automatons. 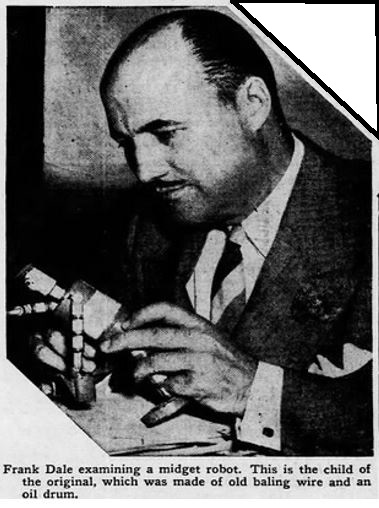 Frank’s scaled-up and far more realistic automatons were designed as advertising gimmicks. He was written up in 1940.

Mr. Dale’s figures, powered by a fractional horsepower motor, manipulate themselves and can be owned and operated for something less than the national defense fund. They are compelling; some are enticing; a few actually have charm. …

As a matter of fact, several of them have an original. She is Vivian Howe, a model from whose form and features the dummies are sculpt. 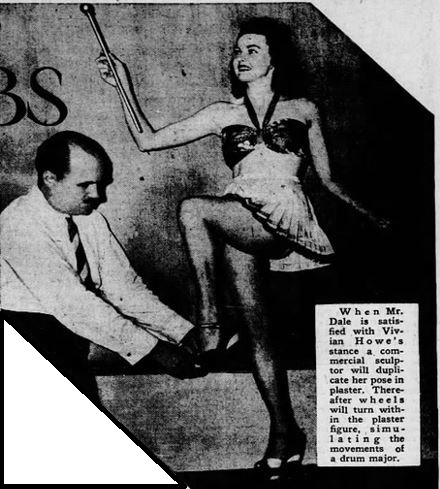 In 1940 everybody’s thoughts were about the war in Europe:

[H]e can also deliver a robot that smokes, shakes hands, and will yell, not being dumb, “Strafe Hitler.” …

He says it’s a feasible thing to build armed robots, mechanically adjusted to firing rifles, and place them in hordes at strategic places as a measure of defense. He says they could be motored to rise up out of trenches, bop a Nazi, and slink back to wait for the next.

The article refers to “dummies,” “robot,” “automaton,” “mannequins,” and “tin can,” all in an article about Mechanical Man, Inc. That’s probably the simplest explanation for Asimov’s corporation. All the words were in popular use; none had yet won out and become the dominant word image. For various reasons the war did that. By the time I, Robot appeared in 1950, robot lead the pack and any other usage seemed either old-fashioned or contrived.

Somewhere along the way, Frank swung a deal with Mae West to robotize her in a half-sized likeness. Only two were made, one purchased by West herself and the other later making its way to Gabe’s Doll Museum in Tombstone, AZ. 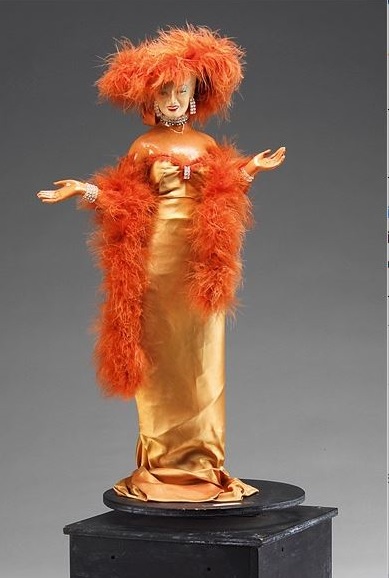 Frank’s biggest seller was a robot that most people would never consider by that word. Robots were huge, muscular, behemoths of steel. Frank’s fortune was built on a baby in a bassinet. 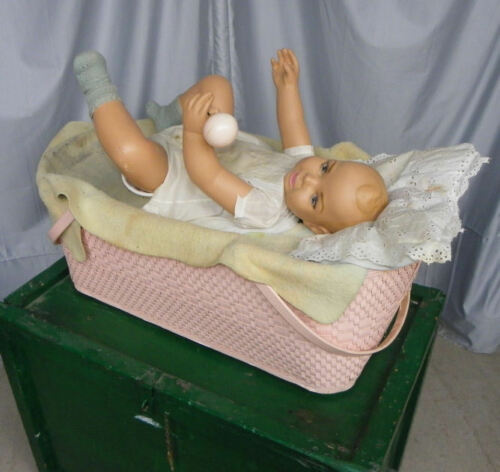 Plugged in with a 28 ft long cord that made it easy to display in a store window, the baby’s arm moved to rattle the rattle. Or she could hold a cake of Sweetheart Soap, the soap delicate enough for a baby, “the soap that agrees with your skin.” The baby came with a number of interchangeable heads, variously colored arms and legs, and a selection of soaps.

Wonderfully enough, a couple of bits of color footage exists, showing the baby in motion.

Sweetheart Soap survived the war, but Frank’s robots didn’t. All robots went to war, if only because inventors stopped making them. freeing up valuable metals for the war effort. As mentioned in the Webb City Hall of Fame, Frank turned his talents to other higher-priority items. Sweetheart soap dolls are now a four-figure collectible, if you can find them.

Steve Carper writes for The Digest Enthusiast; his story “Pity the Poor Dybbuk” appeared in Black Gate 2. His website is flyingcarsandfoodpills.com. His last article for us was Book of Space Adventures.

I came across that while researching this piece. Everyone should click on that; it’s… unique. Bent Bolt is a great name for a robot band, but you have to be really old to realize that it’s also a pun on Bent Fabric, a Danish composer who had a million-seller in the 60s with “Alley Cat.”

I’ve loved the Bent Bolt song for years, but I never realized that the name was a pun. It’s nice to know that I’m not that old!