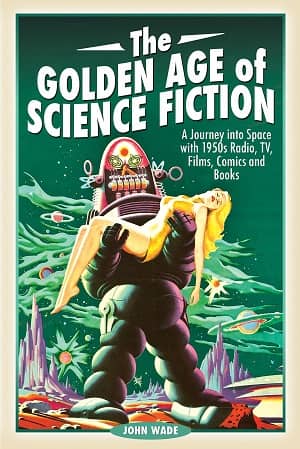 John Wade is the author of more than thirty books published in the US and the UK, including London Curiosities and The Ingenious Victorians. His newest is The Golden Age of Science Fiction: A Journey into Space with 1950s Radio, TV, Films, Comics and Books, a gorgeous hardcover that celebrates classic science fiction in all its forms. Well, the early forms that made vintage SF what it is, anyway.

John Wade grew up in the 1950s, a decade that has since been dubbed the ‘golden age of science fiction.’ It was a wonderful decade for science fiction, but not so great for young fans. With early television broadcasts being advertised for the first time as ‘unsuitable for children’ and the inescapable barrier of the ‘X’ certificate in the cinema barring anyone under the age of sixteen, the author had only the radio to fall back on – and that turned out to be more fertile for the budding SF fan than might otherwise have been thought. Which is probably why, as he grew older, rediscovering those old TV broadcasts and films that had been out of bounds when he was a kid took on a lure that soon became an obsession.

For him, the super-accuracy and amazing technical quality of today’s science fiction films pale into insignificance beside the radio, early TV and B-picture films about people who built rockets in their back gardens and flew them to lost planets, or tales of aliens who wanted to take over, if not our entire world, then at least our bodies. This book is a personal account of John Wade’s fascination with the genre across all the entertainment media in which it appeared – the sort of stuff he revelled in as a young boy – and still enjoys today.

Science Fiction has long been a genre of obsession, though modern fans have a healthy range of sub-genres to obsess over, like video games, anime, role playing games, comics, television, Marvel movies, Star Wars, toys, Star Trek, George R.R. Martin, and many others. In the 1950s there was just magazines, movies…. and radio.

The Golden Age of Science Fiction has a lot of appeal for me, since I hope it will be a look at the genre from a fresh perspective…. well, fresh to me, anyway. I don’t know much about classic SF radio and 1950s monster movies, I’m looking forward to it. It will be published by Pen and Sword Books on February 28, 2019. It is 240 pages, priced at £25.00/$42.95 US. Get more details at the Pen and Sword website here.

I don’t know about what’s actually in the book but he sure hit a bull’s eye when it came to the cover!

Kind of a high price point, but if I come across it on discount at Barnes & Noble, I’ll likely snatch it up!

I’d love to see shots of the inside, to see if it has color interiors. I’ll see if I can get some after it’s published.

The author is quoted as saying because films were rated X that children in the 1950s had to fall back on radio. I hate to mention it, but Hollywood’s voluntary rating system–including the first X-rated film–didn’t occur until the late 1960s, 1968 to be precise. Here’s but one source of many giving the 1968 X-rated date:

Can’t understand why this historical error didn’t raise an eyebrow with any of the author’s proofreaders, or even the publisher. Oh, well.

Minor correction. The quote about the X rating is from the Amazon promotional blurb, which may or may not have been written by the author. The dating error is still not correct, however and the blurb writer should have his or her wrists slapped. 🙂

While that’s all true, it applies only to the American X-rating.

Pen and Sword is a British publisher, and the blurb talks about “the ‘X’ certificate,” which was applied to British films starting in 1951.

Thanks, John. I was aware that Wade was British so searched the history of an X rating for British films to make sure. While I ran across a number of websites detailing censorship in British films, the one you point to is obviously the correct one. So I stand corrected.

I emailed the author about this yesterday, and thought I would share his kind reply:

I’m always happy to receive comments or even criticism on my books when it is constructive and brings new information to me.

As you have now ascertained, the X Certificate was introduced in Britain in 1951 to replace the old H Certificate. That said, maybe I should not have intimated that EVERY science fiction film automatically got an X. To my certain knowledge, Invaders From Mars and Forbidden Planet must have been A Certificate films because I saw them both when I was about ten or eleven years old (and loved them). On the other hand, films like The Quatermass Xperiment went so far as to build its title around an ‘X’ and to rejoice in the certificate it got. (It had been called simply The Quatermass Experiment when it first appeared on BBC TV.) I’m pretty sure that Nineteen Eighty-Four didn’t escape an X classification either. Also, in the book, I have a picture of an actual X Certificate for The Trollenberg Terror.

All I know is that I was born in 1945 and there were a lot of good monster films that I wasn’t allowed to see as I grew up in the 1950s. Just for the record, the first X Certificate film I did see, when I was 16, was The Day The Earth Caught Fire, which doesn’t make it into the book because it was released in the 1960s. I still consider to be one of the best SF films ever.

Thanks for your interest and kind regards.