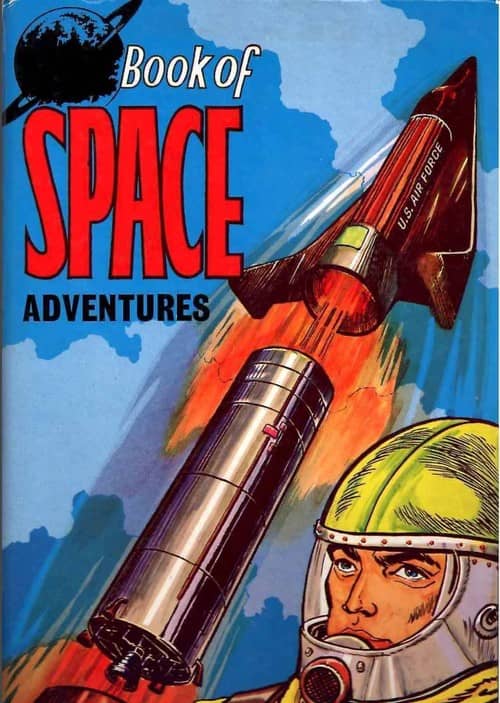 British kids thrilled to real-world rockets and space travel as did American kids. Sputnik conquered space in 1957. By 1963 both the Russians and the U.S. boasted about astronauts circling the Earth. Canada launched the Alouette 1, Valentina Tereshkova became the first woman to enter space, signals had been bounced off communications satellites, probes flew by the Moon and Venus. The Dyna-Soar project promised a reusable space craft that looked like the coolest rocket plane ever.

Publishers around the world jumped on the trend. A UK firm called Atlas Publishing & Distributing Ltd. wanted a piece. It released Book of Space Adventures, called on the inside the “Boys’ Book of Space : With factual features on the World’s space programme AND fictional adventures of SPACE ACE – intrepid Commander of the Galactic patrol”.

Book of Space Adventures – the British whisked a “The” off to whatever island of misfit modifiers it exiled the “in” which properly goes before hospital and university – stuffed a bit of everything into its 64 pages. Illustrations of American rockets and the U.K. “Scout 1” satellite; photos of Yuri Gargarin and Spacedog Balka; drawings of military fighter planes; a conceptual cutaway of a manned space station; an article on the Dyna-Soar pictured on the cover; a photo of an Atlas ICBM taking off, with flames colored in.

And comics. Lots and lots of comics. 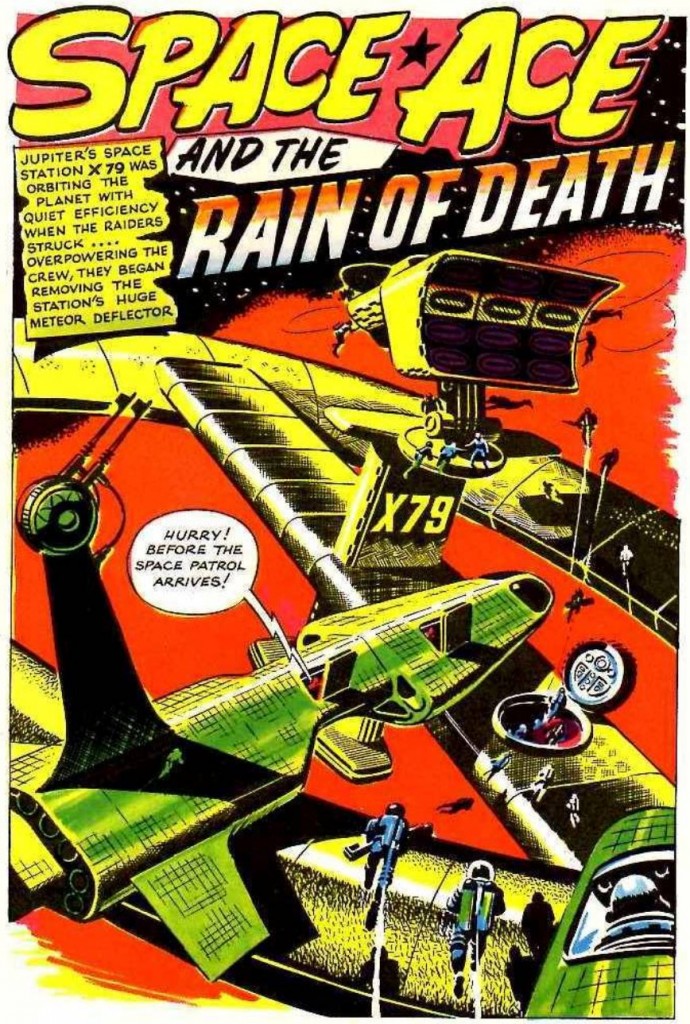 “Space Ace” dated back to 1952, with one of the most unusual origin stories in the chequered history of comic books. Along with the Lone Star Rider and Captain Cutlass the Pirate, Ace Hart was part of the cast of the first issue of Lone Star, created by Die Cast Machine Tool Ltd to sell their Lone Star toy range. Research was not their long suit. Another Ace Hart already existed so Die Cast renamed him Space Ace in the third issue. His personal origin story, given on ComicVine, explains why he fit into a western comic.

In the near future, when man has conquered the stars, Ace Hart was the sheriff of Tarrant County, Texas, until he was struck by a meteorite. Gaining an immunity to radiation from this strange encounter, he enlisted in the United Planets’ Space Squadron, and was assigned command of the new spaceshop [sic] LS1, exploring space and investigating interstellar crimes. His most trusted ally was Sergeant Bill Crag, but other crew members included the pilot Bill Haines, and scientists Professor McKay and Dr. Wang Fu.

Two major changes occurred during the comic’s 100-issue run. Atlas Publishing bought it from Die Cast and Ron Taylor took over as artist. Lone Star printed in black & white, allowing Taylor to show off his mastery of ink. The comics were later collected into a series of books and colorized.

Book of Space Adventures wowed British teens, or at least made enough money to ensure sequels. Similar issues were released in 1964, 1965, and 1966.

“Space Ace,” who after 1963 returned to being “Ace Hart,” was the lead comic in all the sequels. Any regular readers moving over from Lone Rider must have wondered if a radioactive meteorite had smashed into Atlas’ offices. Turner supposedly continued as artist when Atlas repurposed “Space Ace” in Space Adventures, but something was off. That robot panel above has a fine liquid line but whoever drew these “Space Ace” stories forgot that people could bend. The color overlays have drawn the ire of comics enthusiasts. And half the strips were black & white with an ugly red overlay as on this dull, stiff page. 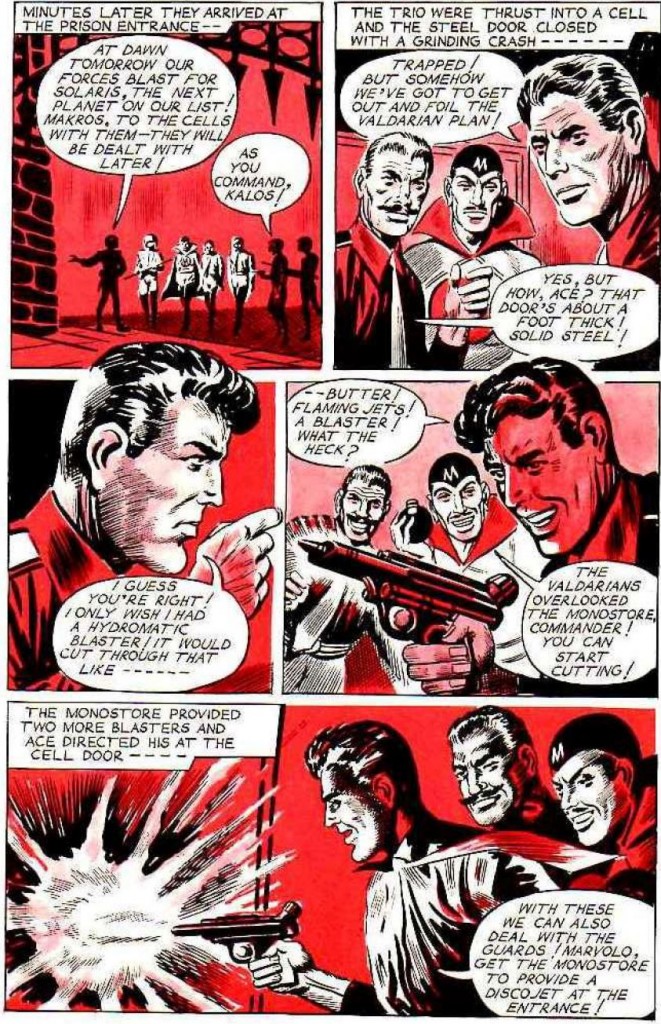 “Space Ace” wasn’t the only comic in the issue. Two half-page gag strips aimed at younger readers leant the only spots of humor. No signatures appeared appeared anywhere on them but the style on both is unmistakably similar.

“Rex from Planet X” provided simple boomerang humor, with Rex always turning the attempted mayhem back on the perpetrator. 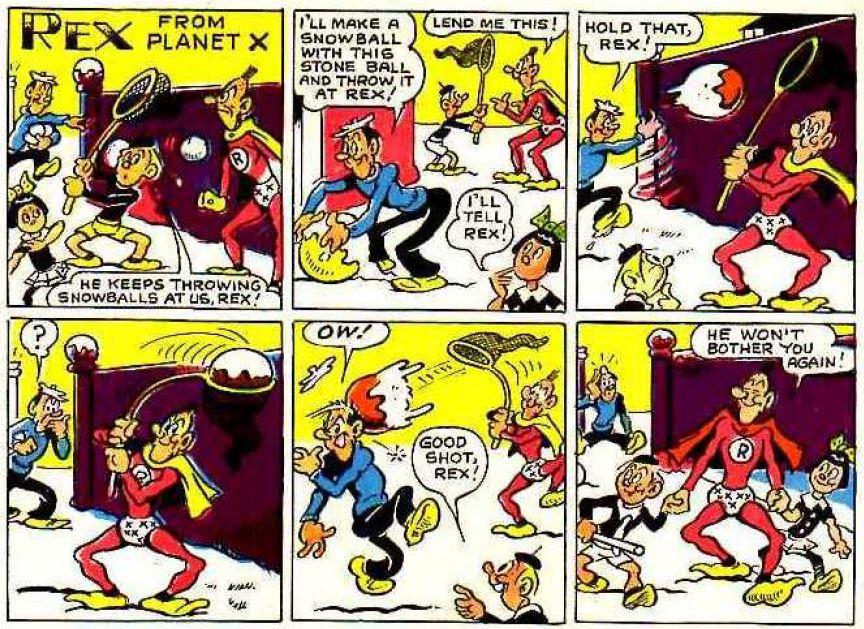 “Rob the Robot” (yes, this is the robot tie-in you’re been breathlessly anticipating) runs along similar lines, although he always wins inadvertently. Here are all four of the “Rob the Robot” strips.

That last strip has weird color overlays worth complaining about.

I couldn’t find any evidence that “Rob the Robot” continued in the later Books but I haven’t been able to find full copies of them to check. The mere existence of the strip is ample evidence of my thesis that robots transcended their origins as mechanical contraptions and became institutionalized as standard cartoon variants of humans, no different from Mickey Mouse, Porky Pig, or Tweety Bird, with all the attributes of humanity in a comic body. They are us.

Steve Carper writes for The Digest Enthusiast; his story “Pity the Poor Dybbuk” appeared in Black Gate 2. His website is flyingcarsandfoodpills.com. His last article for us was Today with Mr. Rivets.

[…] in 1963 by Atlas. The Boys Book of Space – published later than the more widely-known Book of Space Adventures – was produced in landscape format with a cover by Ron, but John does not have a copy, so […]