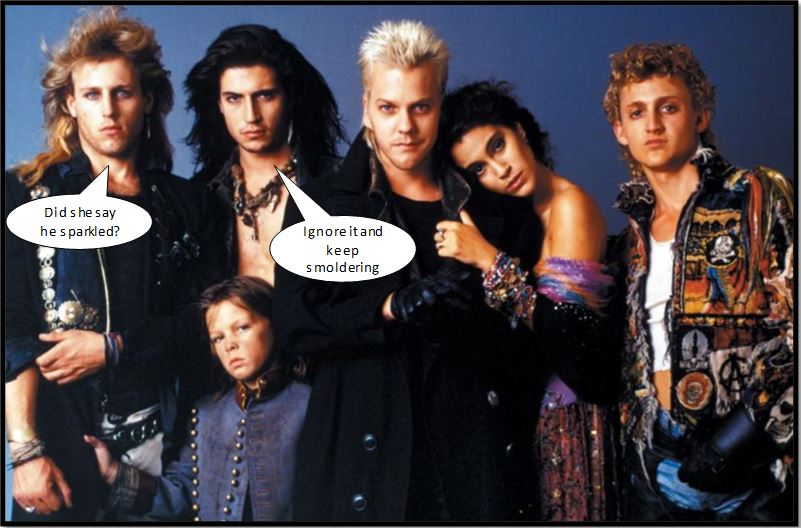 Long before new-age, flannel-wearing vampire Edward Cullen pouted and emo’d his way through not drinking blood in the Twilight series, there were the dangerously sexy boys from Santa Carla who introduced the 80’s to motorcycle-riding vampires with incredible fashion sense.

The Lost Boys premiered in the summer of 1987 with the tag line, “Sleep all day. Party all night. Never grow old. Never die,” basically summing up every 80’s kid’s deepest desires. Though The Hunger arguably provided vampires with their first 20th century panache, Jason Patric and Kiefer Sutherland brought us the idea of a teen-vamps in all their dark, leather-clad, bad-boy glory; effectively changing the genre forever by then giving rise to the Joss Whedon-helmed television series Buffy the Vampire Slayer and its subsequent universe.

Two unfortunate and highly-forgettable sequels followed, neither of which managed to capture the magic of the first. Lost Boys – The Tribe (2008) saw the return of only one original cast member, Cory Feldman, and tried to make up for its shortcomings of pretty much ripping off the original plot, by throwing in a whole lot of skin. Lost Boys – The Thirst followed two years later with Feldman still in tow and fared slightly better with fans, but it was clear the whole concept either needed to be dropped, or get a reboot for the 21st century.

And voila… here we go.

The idea of The CW developing a television series adaptation of The Lost Boys was originally kicked around back in 2016. And though the network initially passed on a pilot at the time, Deadline reported last week that the network has finally placed an order.

The CW originally developed a series adaptation of the iconic 1987 Warner Bros horror comedy movie The Lost Boys with Rob Thomas writing during the 2016-17 development season. While the project didn’t go to pilot, the network brass remained very high on the title and had been looking to redevelop it. While Thomas has been busy with his Veronica Mars reboot for Hulu, a take by writer Heather Mitchell (Scandal, Grey’s Anatomy) got everyone excited, and the new adaptation picked up steam this development season.

Welcome to sunny seaside Santa Carla, home to a beautiful boardwalk, all the cotton candy you can eat… and a secret underworld of vampires. After the sudden death of their father, two brothers move to Santa Carla with their mother, who hopes to start anew in the town where she grew up. But the brothers find themselves drawn deeper and deeper into the seductive world of Santa Carla’s eternally beautiful and youthful undead.

Okay so we’re back in Santa Carla – so named because back in the day, Santa Cruz was in no hurry to again be associated with the phrase “murder capital of the world” having just shaken off a horrible decade of serial killings, but it is supposed to be Santa Cruz. And the plot sounds precisely like the first movie, which I suppose is the point as its being billed as a “reboot.”

In spite of some excellent cyber-stalking, I have been unable to find out any more such as who is starring and whether, like its source material, the TV version will have incredible music to go along with it.

We’ll keep our eye on this one and until we know more, here’s the iconic “Sexy Sax Man” scene from The Lost Boys.

The measure of any vampire movie/TV show is how suitable it is to start drinking to in high school. The original Lost Boys will be hard to beat by that metric.

One of my all-time favorites. And I’m still surprised to remember that it came out at about the same time as Near Dark (which, to be fair, I never saw until a couple of years ago), which is kind of its exact opposite in almost every respect.

If you haven’t done so, check out Hemlock Grove on Netflix. It takes the teen-aged monster theme to a highly-watchable extreme. Though Lost Boys is an iconic original, I’m sort of interested where the CW will take it. And though I wanted to love Near Dark, I simply could not, any more than I could love From Dusk ‘Til Dawn.

While I admit I did enjoy Near Dark and I do also like From Dusk ‘Til Dawn, yeah, neither of them can hold a candle to Lost Boys.

To reboot Lost Boys is going to take some doing. The original is one of the finest films of the 80s and not just Vampire films.

My God, I hated this movie. (Every ointment needs a fly. Now continue with your enjoyment. Buzz buzz buzz!)

Uh oh. I guess this means no fruitcake from Sue this Christmas…

No, it means none of those delectable little severed fingers I make out of hot dogs and slivered almonds this Halloween.

You know what I think it is? It’s the cast – this whole generation of actors just left me cold. They thought they were much, much better than they actually were, and they were so smugly certain that they were BIG BIG BIG, and would remain so forever. Instead, they were inescapably everywhere for about six years (that’s part of what pissed me off) and then…pfffftt. (That last part is the best part.)