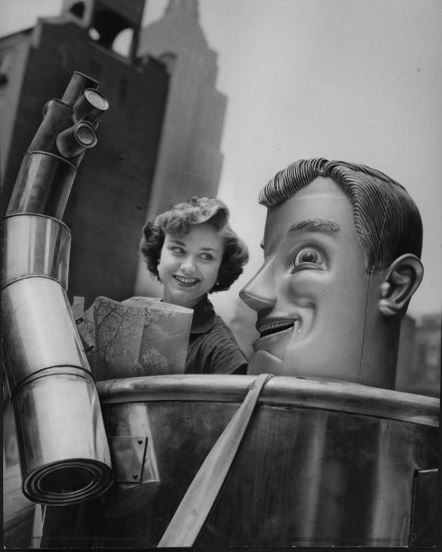 I used to live in the pleasant village of Fairport, NY, a short walk from the Erie Canal, by which inland Fairport got its name. A reminder of those industrial days could be found about a mile east along the canal in a long four-story factory owned by the American Can Company. Canco, as locals called it, had been formed in 1901 as one of the 300+ trusts that gobbled up every industry in America into impregnable monopolies. The tin-plate trust was never as famous as Rockefeller’s Standard Oil or Carnegie’s United States Steel yet played just as critical a part in the average household. Canned foods were another hot new technology, because a new method of sealing the cans without solder had just been perfected by the well-named Sanitary Can Company, which ran their experiments in Fairport. After a steep learning curve, leading to many bulging botulistic cans quietly being dumped in the canal, Sanitary perfected the means of crimping can tops on to the body, made of corrosion resistant tinplate steel, the familiar tin can of today. American Can swallowed Sanitary Can in 1908.

World War II changed everything, including food. Millions of young families fled cities for the open spaces of the suburbs and their increasingly gigantic supermarkets, filled with endless aisles of canned foods. Those promised ease from the hours of cooking known by their mothers. Poppy Cannon, author of the Can-Opener Cookbook, apotheosized the tool as “the open sesame to freedom . . . from tedium, space, work, and your own inexperience.”

American Can had plants all over the country and kept opening more in the 50s boom years along with every other industry in America. Newspaper editors were bored out of their minds by photos of the mayor shaking hands with the plant manager. Charlie apparently was dreamed up as the ultimate gimmick.
Charlie had a giant can for a body, a graduated string of cans for arms, and the head of a ventriloquist’s dummy blown up to Hulk size. Costco was far in the future, but they should think about revitalizing Charlie as their mascot, the king of purchasing in bulk. He towered at seven feet and had a 134” waist. He needed every inch to house 500 pounds of batteries, half his total weight, powering 47 tubes and six motors connected by a mile of wiring that made him radio-controlled. Movement humanized him. “Canco Charlie shakes hands, moves his mouth, rolls his eyes, whistles at pretty girls and dances a lively rhumba or a graceful waltz” on his rollers, seen here doing one or more of those with Pennsylvania’s Canning Industry Queen Celeste. 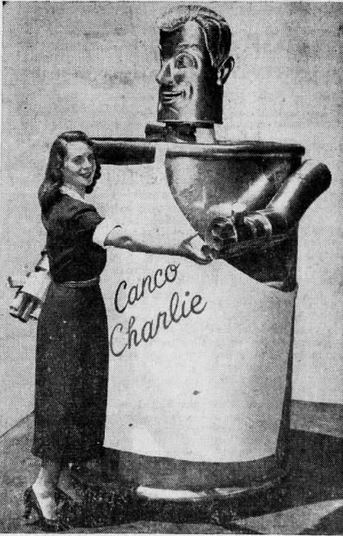 (The graceful cursive on his midriff identifies him as Canco Charlie Mark IV. Earlier versions had a sans-serif all-caps Canco in an oval, and then cursive lettering high up on his chest, followed by customized versions for special public service campaigns. The seemingly one-note Charlie became as versatile as tin cans themselves.)

If a seven-foot high talking can couldn’t make the news, nothing could. American Can launched their robot at the gaudier, glitziest occasion in their community, the annual convention of the National Canners Association held, inevitably, in Atlantic City in January 1950. Dozens of newspapers ran the photo of the delighted looking “Prince Alloy Can,” a moniker I hope got somebody fired. Even the newspapers couldn’t stomach it. After the first day Acme Telephoto replaced it. All subsequent photos I can find are labeled “Howdy, Tinhorn” instead and most of them omit any reference to Prince Alloy Can. “Charlie Canco” was a lot better, but they settled on “Canco Charlie,” giving the company first billing. 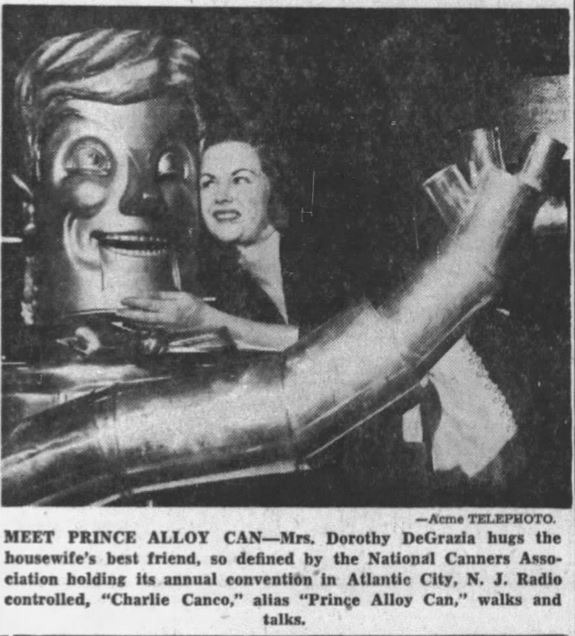 American Can recycled Charlie for appearances at plant openings. Somehow the photographer for the Eau Claire [WI] Leader-Telegram didn’t get the message. The dullest picture of Charlie ever printed finds him taking up half the with the plant manager and mayor in the background looking upstaged. A year later a brighter photographer posed the plant manager with a pretty young mother and her children. That’s stuff that sells papers. American Can had a hit.

Then reality smacked them in the face. Even big, successful companies didn’t open a new plant every day. They ran some ideas up the flagpole to see who would salute. When nobody did, they fell back on slavish imitation. Westinghouse had led the way in the late 1920s with a robot called Televox, followed by Katrina von Televox, Willie Vocalite, and the 1939 World’s Fair sensation Elektro, who, with his robot dog Sparko, traveled the country in his personalized Elektromobile touting Westinghouse appliances. What’s a robot other than a series of cans, anyhow?

Without asking why a robot spokes-can would sell anything, American Can bought a “trailer-truck” in 1952 and shipped Charlie across country as an “Ambassador of Good Will,” stopping at county fairs and whistling at pretty girls like Mae Entwhistle, the “Fairest of the Fair” in San Diego. Charlie appears to be wearing a Mexican hat and a serape. Trouper that he was, his expression never changed. 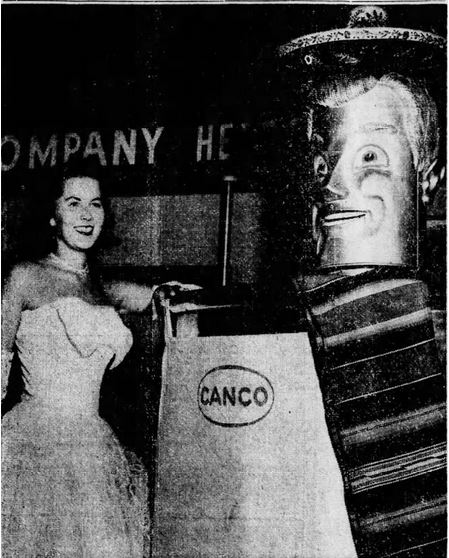 The 1953 tour saw Charlie “alerting all who will listen on the necessity for donating blood now before the poloi [sic] epidemic strikes this summer.” Amazingly, pretty girls also made the picture. Only celebrities ranked above them in the hierarchy of must-print pictures. Charlie posed in Los Angeles with comedian Fred Allen and character actor Tom Dugan. Charlie’s bib was easily swappable to personalize every appearance.

Later that year the Maryland Traffic Safety Commission recruited Charlie for its safe driving campaign to reduce the “Summer bulge” of traffic accidents. “Charlie is appearing communities throughout the state telling Marylanders to ‘Slow Down and Live’.” Pedestrians were targeted as well, with Charlie bearing a big “Look Out Before You Step Out” slogan. Was a pretty girl involved? No. Two of them were. New Jersey also got into the action. Somehow the same two pretty girls got into exactly the same pose for that shot. It’s a modern miracle.

To be fair, sometimes photographers didn’t pose Charlie exclusively with pretty girls. Sometimes they had kids crawl all over him. 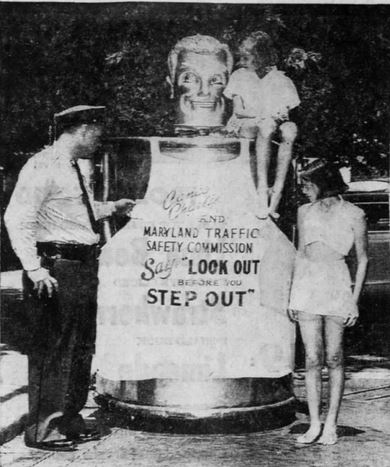 Look closely at the next picture. It’s fantastically rare. That is an actual African-American posed in the picture amidst a throng of white people. I looked at literally hundreds of illustrated newspaper articles about robots for my forthcoming book and that’s the first one to be integrated. Kudus to the Asbury Park Press. 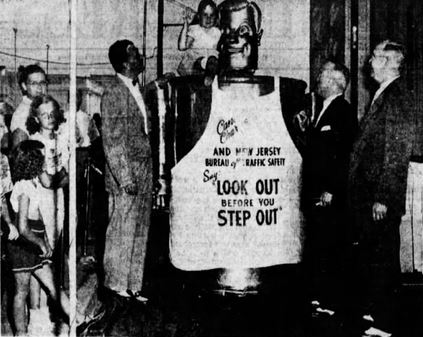 Charlie’s next assignment completed the circle. He was sent north for a series of appearances coinciding with the New York Canning and Freezing Industries Week. The week culminated with a luncheon in Rochester on October 30, 1953, where tribute was paid to “the contributions which have been made in New York’s economic progress by the state’s team of farmers, canmakers, canners and freezers in the 134 years since commercial canning was established in the Empire State.”

Fairport is a suburb of Rochester. Yes, Charlie stopped off for a plant visit at the very place which made him possible more than a half-century earlier.
Canco Charlie’s visit to Fairport lasted two days, during which he visited workers at the Parce Avenue factory, hobnobbed with Fairport’s Mayor Harry Van Horn and other local dignitaries, and entertained the public in front of the municipal building on South Main Street.

When I say that completed the circle, I mean that literally, just as the Second Foundation was found to be hidden on Trantor all the time, ending a certain trilogy. No record of Charlie’s existence can be found after the date of that luncheon, no reason for his retirement is evident. His name and image abruptly vanishes. Charlie got – you know I had to say it sometime – got canned.

Steve Carper writes for The Digest Enthusiast; his story “Pity the Poor Dybbuk” appeared in Black Gate 2. His website is flyingcarsandfoodpills.com. His last article for us was Gismo the Great.