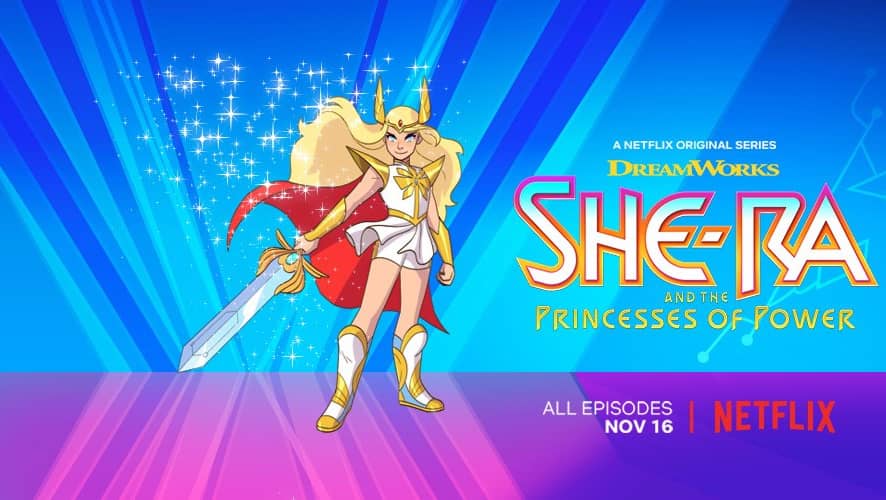 It may have struck you at this point that I am, indeed, a Masters of the Universe / Princess of Power fan. Not just of the show, but of the various incarnations, from golden books to comic books, from newspaper strips to really weird, bad movies.

The greatest failing of this most wondrous world so far is that there had been no full She-Ra reboot since the 80s. We’d seen her again, of course, brought into her brother’s story lines as creators (male, usually. Always.) saw fit.

On November 13, a glorious day that shall forever be marked in history, She-Ra triumphantly returned to the streamed screen. I was excited about the new incarnation, and I already went on about it here (“She-Ra is Now Even More She-Ra“). 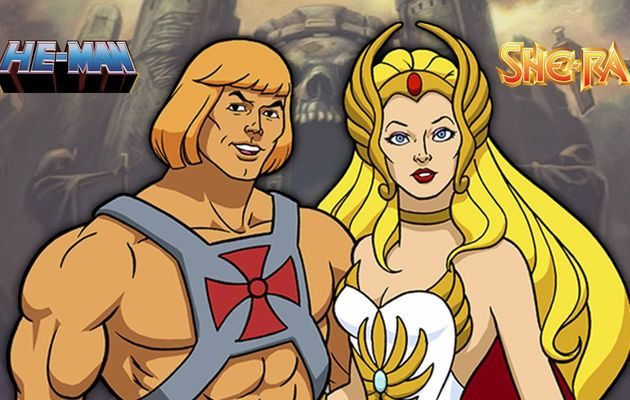 It’s already long binged. Because I’d waited a long time for this. I’m not going to review it (at least, not yet), because many people will say smart things. Instead, I’ll focus on a tiny minor thing (à la geek), since I was especially curious to see how the lack of He-Man Mythos (there are hints!), and the fact that everyone knew She-Ra’s real identity (Adora, for the uninitiated) would play out.

It plays out nicely (no spoilers), and the creative team works it to its peak potential. Well done. And it made sense. Adora had always been very similar to She-Ra. She’s ambitious, strong, a fighter and leader, loves her friends, shows up to events, worries about saying the wrong things, and will stand up to the Evil Horde over and over again because it needs to be done.

She is the heart and soul of the gig economy, of the never rest, always work mentality, THEY EVEN BASED AN ENTIRE EPISODE ON THAT VERY FACT!

Princess Adora will make you feel like a slacker even if you work 16-hour days and are so lonely because you have no Great Rebellion to dedicate your life to, only shitty contract after shitty contract, and drown your sorrows not in pillow fights and giggle fits with friends, but by eating all of the Ben and Jerry’s almond-based ice cream you can find AND WHY DO THEY KEEP DOING PEANUT BUTTER ONES AND WHY DO YOU KEEP EATING THEM, YOU DON’T EVEN LIKE PEANUT BUTTER omg my life is so empty help me. 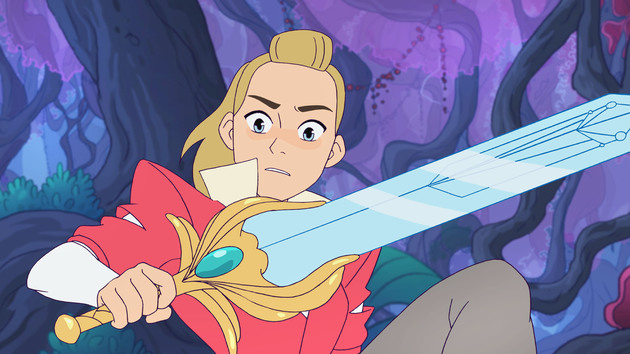 Adora is a great hero.

So, what exactly did she lose by not having her twin brother or a secret identity (which, in the original series, he insisted she keep)?

Okay, never mind that first question. That’s dull and can be answered with a simple “having a twin brother.” Let’s focus instead on the more pressing question of why did Prince Adam want his secret identity kept secret?
Was it to protect his loved ones? I mean, he’s the heir of a kingdom constantly under siege by cackling skeletal buffoon (that’s Uncle Buffoon, to you!). He has guards around him most of the time. His family is royal and ergo already a target for everyone seeking to do evil. His best friend is the captain of his royal guard (I <3 Teela). He mostly spends his days wandering the halls of his castle and the forests of his kingdom, relaxing and laughing and napping, with his equally lazy green tiger buddy, Cringer, convincing everyone he’s too incompetent to ever take over the throne, perhaps as a clever ploy to shed any responsibility and live the life of a wandering, napping hero. 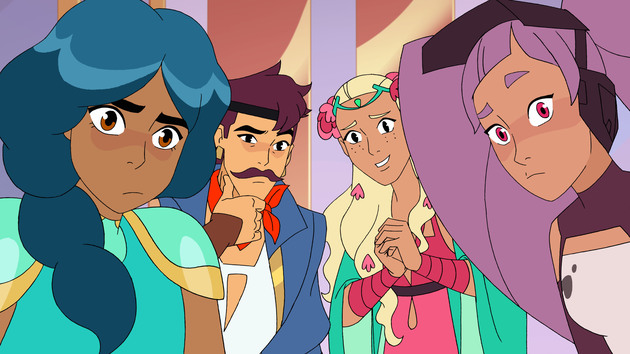 Because he likes to slack off, and nap, and goof off, and waste afternoons laughing at silly wizard tricks? Because he doesn’t always want to be on call, a muscled hero there for your every whim and need, to share a moral or cut a ribbon?

Could it be that Prince Adam is actually keeping his identity secret because he loves himself? He loves his sanity? He loves being Prince Adam, and finds joy in the slow moments of life more than in the quick, exhausting and demanding pace of battle? Of expectations?

Prince Adam would nap this gig economy away. He’s a one percenter, sure, but even if not, he’d live on a beach, charming people into letting him sleep beneath their most prized banana trees, living his days chewing on forbidden fruit and telling stories to laughing children while petting his green tiger, snoring at his side.

Prince Adam wouldn’t be all things to all people. Prince Adam believes in being some things to some people, when He-Man is needed, and then just… being. Just existing. Breathing in the air around him, slightly tainted with the explosions from Skeletor’s latest attack, not remembering the battle and weariness, but remembering the freshness of the air before the attack. And how fresh it would be again, if he napped long enough. 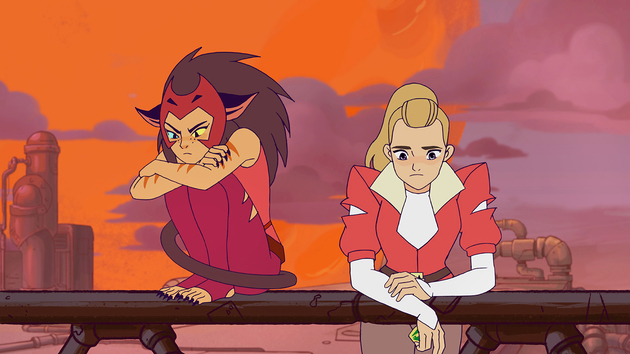 Prince Adam isn’t necessary for Princess Adora to shine, no. He’s not necessary for her to become She-Ra, and fight off the evil Horde. He-Man has his own story, and it’s his to tell.

We need Adora to inspire us to fight evil, to be kind and funny, and to stand up for what we believe in. To be relentless, because evil is relentless. To stand and keep standing, and believe in our strength and power, when all else is stripped away. That love can make a difference, and that it is not a weakness, but our greatest strength. We need to be reminded that we can make a difference, even in the face of seemingly unstoppable evil.

But Prince Adam is also still a hero we need. Prince Adam reminds us to hoard the secrets that will imprison us to more work. He reminds us that ambition isn’t all things, and that you must really shine at times, but that you don’t have to do so all the time. That life doesn’t always need us to be “on.” To be the hero. Prince Adams shows that standing up doesn’t mean never sitting down. Prince Adam believes in naps, and wants you to believe in naps, too.

I’ve made my distaste with the “Re-Boot” culture plain. Won’t do a foaming rant, coz frankly back in the day I never watched She-Ra… “It is for the Gurlz…!” or whatever. I subscribe to Netflix but have ‘boycotted’ it anyways. Character design, cool artist “Shadman” did a neat joke where a slightly older Ben Tennyson was looking for work and they gave him a wig and the He-Ra suit…!

Frankly, if someone is a fan of the old thing and likes/loves the new thing I’m glad. Versus seeing huge monopolistic corporations like giant mutated monsters chew up and excrete our childhood memories… MLPFiM is so far my one exception to the rule, though I never had the original MLP due to it being on cable my parents couldn’t afford.

You are reviewing it legit, not being paid for it, right?

Frankly, we remember these things with rosy glasses, though watching MOtU again I still love it. I feel really sorry for Prince Adam though. IMO it’d be the best cover ever… “Shall we assassinate Prince Adam, O dark lord?” – “No! The King is already a thorn in my side. He’d be full of rage and not rest till he destroyed me. I’ll just try to kidnap/kill the King again – then I’ll get rid of Adam or make him a puppet…” Also explains why Teela is allowed to constantly accompany him. She wouldn’t let him bed her, not without marrying him, and most of the other woman (non hyper powered) must be plain scared of her – thus no affairs with the prince…no miller/farmer/baker’s daughter coming up with a big belly pointing at the prince… However, since he has to keep the secret even from his own father he’s considering himself lucky not to be disowned or assassinated by his Dad in fear of his kingdom which is constantly under seige and being seen as so worthless a person…

Note that the show was dumbed down by network censors. Especially She-Ra. Really. They were originally going to make her as strong as He-Man! (Place jokes about He-Man figure with a dress and Barbie doll head!) Really, since they use magic or clarketech to make HeMan literally as strong as Superman (early crossover) that is far beyond anything biology could do, why not…? Nope – network censors made it so she could be no more than HALF as strong as He-Man though she could be swifter and more intelligent… Heh, I remember the “Retard” guessing the plot right, as dumbed as they made the MoTU show…that’d be easy to pull off. I think they did a sneak in where she did lift as much as He-Man to kinda flip a finger at the censors later…

I still argue that we as writers should be vehemently against the culture of re-boot. Where will the NEXT MOtU, Gremlins, Ghostbusters, Indiana Jones, Star Wars come from if the things NEVER die off – they just make it again, better special effects, the story stripped to bare bones so even the worst hack could do it? Where are the JOBS for writers? Where is the opportunity for a writer to get their work turned into a movie/animation/tv series?

Like, case in point, silly but serious – “Kapatra”.
Neat short lived comic series. Astronaut gets pulled into a world that is inspired by MOtU – all the characters are crazed, wildly dressed, hyper strong, simple and either good or evil… Well he’s GAY and he LOVES it and doesn’t want to leave! Nothing explicit, just crazy fun both a parody of and loving tribute. Loved especially the wizard and the motivational robot. Surprised no review of it here – all the modern demon-graphics – non-white main character, gay main character, parody of classic hyper macho action figure franchise… And this site did do reviews of other crazy gender benders like Ody-C – thought it’d be neat. I liked it coz it had a good story and was fun, like Venture Brothers the right variety of loving tribute and criticism of loved childhood things. Image not pay for a review of it?

*glances at opulence of mansion*

Of course I’m not being paid to review the show. Besides, focusing an article on Prince Adam and naps reduces my usual cut by quite a bit. I’m barely getting new marble floors out of this article.

Also, I think you might enjoy my past article on reboots: https://www.blackgate.com/2015/03/20/adapting-nostalgia-to-be-more-awesome-and-how-i-try-to-contain-my-idw-anger-while-remaining-spoiler-free-mostly/