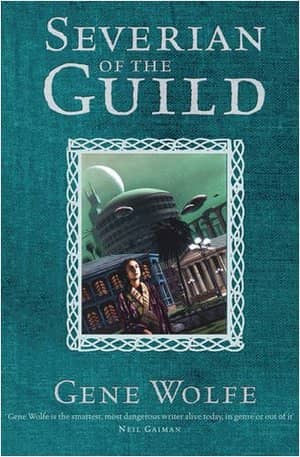 Despite being one of the densest sci-fi/fantasy works I’ve ever read, packed with Classical and Biblical allusions as well as being an homage to the dying Earth genre, Gene Wolfe’s four-volume The Book of the New Sun is magnificently compelling. While it can be read, just barely, as an adventure story, it’s so much more — and missing out on the “so much more” would be a crime. According to Wolfe, in the valuable series companion, The Castle of the Otter, he wanted to create a vast and believable fantastic setting with many distinct lands and cultures, and tell the story of “a young man approaching war.” He accomplished both these things and more. The story is not just of one young man’s salvation, but also of his emergence as his world’s savior. If these themes alone don’t spark your interest, let me add that they’re all conveyed in some of the flat out best writing I’ve ever read.

Looking back over all four books, it’s far easier to discern what Wolfe was doing than when I was in the middle of them. Severian, while he has an eidetic memory, regularly withholds or presents information so as to make himself appear in the best possible light. The second book in particular, The Claw of the Conciliator, left me puzzled, to say the least. While the other three books, The Shadow of the Torturer, The Sword of the Lictor, and The Citadel of the Autarch present as mostly linear accounts of Severian’s adventures, much of Claw is made up of mysterious visions, inscrutable dreams, and encounters seemingly untethered to the rest of Severian’s reality. Over the following two books, new and previously omitted details are provided by Severian and the series’ arc becomes more clear. Severian, no matter how kindly he is, was bred to violence. Gradually his growing empathy and eventual revulsion at the things he has been trained to do are transforming. The battles between the bandits and the Ascians in which he participates in Citadel serve the same purpose. From the perspective of the last pages much of the mystery of Claw makes sense. Severian is a man cut loose from literally everything and everyone he has known and is finding the world a duplicitous and unjust place. The weirdness reflects the massive spiritual and mental dislocation he is suffering.

In the dying Earth elements of The Book of the New Sun there are obvious summonings of the spirits of William Hope Hodgson and Clark Ashton Smith. The secret identity of the reigning Autarch and some of the Christian elements are more than reminiscent of G.K. Chesterton. The ancient rituals, dank chambers and dark tunnels of the torturers and the Matachin Tower echo much of Mervyn Peake’s Gormenghast trilogy. It’s Cordwainer Smith and his Instrumentality of Mankind stories I am most reminded of after finishing all four of Wolfe’s books. Like Smith, Wolfe is concerned with human stagnation.

I decided that the future most in keeping with the dark figure I planned and his journey toward war was what I call the do-nothing future, the one in which humanity clings to its old home, the continents of Earth, and waits for the money to run out.

The stagnation depicted by Smith is very different, but still, there is the overriding image of humanity as something that is spent and morally and spiritually exhausted.

The past is poorly remembered and tales of it a jumbled collection of disparate bits and pieces forced together. Wolfe laces his saga with these patchwork medleys. There is one that mixes up the USS Monitor with the Minotaur and another that’s a mashup of Mowgli, the founding of Rome, and Squanto. They serve as a reminder that no matter what Severian tells us, storytelling is not automatically truthful, and that we, swept us as we might be, are in the middle of a great story. Even Severian is reminded of this at one point when speaking to a group of powerful aliens:

“No. We are almost what you think of us — powers from above the stage. Only not quite deities. You are an actor, I believe.”

I shook my head. “Don’t you know me, Master? You taught me when I was a boy, and I have become a journeyman of the guild.”

“Yet you are an actor too. You have as much right to think of yourself in that way as the other. You had been performing when we spoke to you in the field near the Wall, and the next time we saw you, at the House Absolute, you were acting again. It was a good play; I should have like to see the end.”

What is real and what isn’t? Even Severian is never sure despite having lived through all the adventures he recounts. I admit this irritated me a little in the beginning, but over time I came to accept 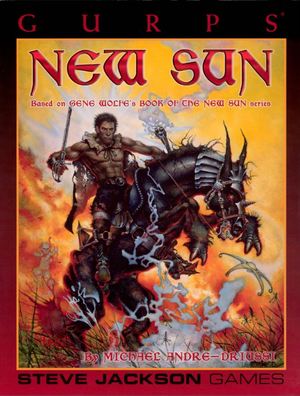 it and realize it all worked towards building Wolfe’s universe and telling Severian’s story. It’s an uncertain place, of great age, where the past is misremembered and the present is chaotic. Its inhabitants are living in the middle of the unfolding of mighty, divine events that are disrupting the world that has flowed comfortably on its slowly stagnating way for a thousand years. The setting is sci-fi but transcendent happenings are going on all around Severian, the true nature of which remain only partially uncloaked until the end of the last book.

I will be pondering these books for some time to come. There’s so much more to pull out than what I’ve addressed in these meager articles. Nonetheless, I hope I’ve written enough over the course of these pieces to at least encourage you to give The Shadow of the Torturer a try.

I will also be finishing off The Castle of the Otter and probably the next book in the sequence, The Urth of the New Sun, sooner rather than later. Oh, I didn’t tell you there are more books, but there are. Urth continues the story of Severian. Then there are two additional sequences, The Book of the Long Sun and The Book of the Short Sun, that continue the story of humanity in same universe as Severian.

Previous reviews of the Book of the New Sun:

So glad your reread went well! That Mowgli/Romulus/Squanto mashup story-within-a-story is awesome.

I thoroughly enjoyed the “Long Sun” and “Short Sun” series as well. There are a few unexpected cameos within them.

One of the most effective “distancing” techniques that I have encountered in science fiction was the simple one that Mr. Wolfe used by having Severian remark on the coming of night by noting how the mountains had risen up to cover the Sun. Which threw me at first, until I twigged to the idea that Severian is far enough into our future as to implicitly assume a Copernican solar system, unlike us who, after a mere 500 years of heliocentricism, still speak of “sunrise” and “sunset”. So simple and so powerful.

Eugene: Good point and one I hadn’t noticed! THE BOOK OF THE NEW SUN is incomparable when it comes to textual density and/or sly references like that. Yet, I found it all quite readable as a teenager.

When reading it the first time, the “distancing” effect really struck me when I realized that the Moon had been terraformed and that there was a photo of Neil Armstrong–who was merely some unknown “warrior” to Severian–hanging on the wall of the Library.