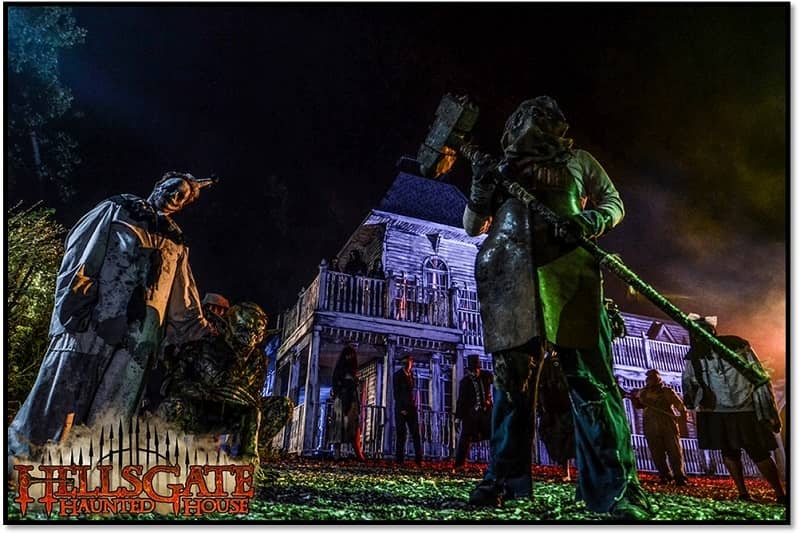 Most of us grew up with a local Jaycees or some other community organization putting together their annual ‘haunted house’ every October. With tickets in the neighborhood of $5 each, my friends and I would make the rounds, hitting several in a weekend as more of a social event than the adrenaline rush of real scares, which were hard to come by when your best friend’s parent or older sibling was behind the semi-cheesy mask and resale-shop costumes.

These days however, haunted attractions are decidedly more elaborate and sometimes permanent establishments. Instead of ‘haunted walks’ through the local forest preserve, or forays through mazes of black Glad bags and PVC, Halloween season thrill-seekers can expect to treat themselves to multi-thousand-dollar special effects and real actors in Hollywood-worthy costumes. Of course, tickets are closer to $50 than $5, but you get what you pay for.

And did we ever when over the weekend Black Gate photog Chris Z and I road tripped nearly two hours to visit HellsGate Haunted House, ranked #11 in the industry magazine HauntWorld’s annual list of the Scariest Haunted Houses in the Nation – and that is out of 5000 entries. Obviously, you don’t rank that high on the list without some impressive moves, and we were particularly interested to see an effect in use which we first saw on the show floor at the Haunted Association and Attractions Show last March. The owner of HellsGate, John LaFlamboy, purchased one of the biggest show effects, a $16K, ‘life size’ animatronic dragon, right off the show floor and we couldn’t wait to see how it turned out. 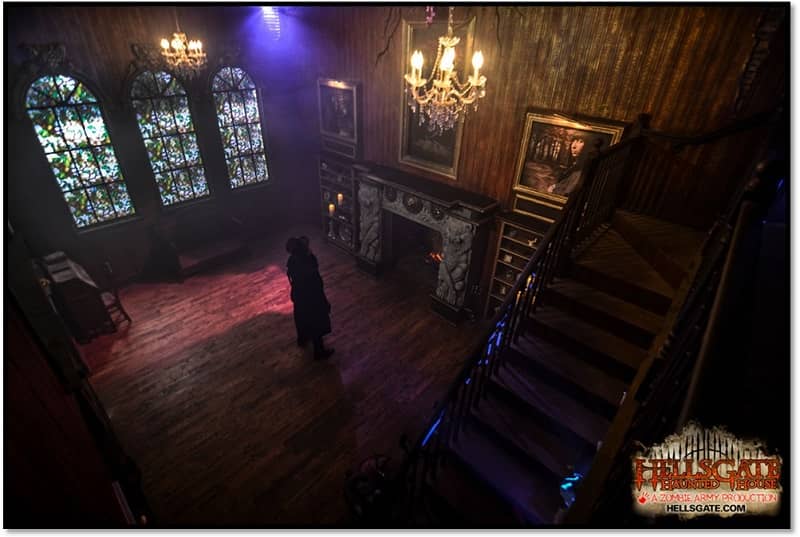 HellsGate opened in 2016 in Lockport, IL and hosts an average of 1200 patrons per night during the Halloween season. The attraction, which cost around $2 million to construct, sits on 20 acres of land on the edge of town, requiring visitors to park in the local commuter train lot and be bussed down two-miles of gravel road and woods, to the site. Every moment of the visit is carefully planned and executed, meaning instead of feeling bunched up and crowded (nothing kills a scary mood faster than a conga-line), patrons move through the one-hour event in small groups, with clever methods employed to keep you feeling isolated.

Chris Z and I arrived when things opened at 7pm and purchased VIP tickets, so some of what I am about to tell you may have to do with that. But following our somewhat creepy bus ride, we entered a waiting area where we were almost immediate ushered through a literal gate into the ‘cemetery’. Lit with strategically placed bonfires and torches, augmented with lanterns hung in the trees, we followed four other patrons along a winding path, still dimly lit, through a very realistic graveyard populated with everything from zombies and vampires, to grave robbers and crazed residents attempting to hide themselves and us, from everyone else. One crazy-limber actor did a nightmarish scuttle down the path after us on their hands and feet contorting and making snorting noises the whole time. The effect was so disturbing in the semi-darkness that I might (might) have grabbed Chris’s coat sleeve.

Following this 20-minute excursion, we came out of the trees and into a clearing, to a giant iron gate behind which was, no joke, a house that looked like the one occupied by The Munsters.

Various creepy people directed us up onto the front porch and through the double doors into the foyer. The attention to every detail of the interior was incredible and it felt like we had stepped into a real, decrepit Victorian mansion. In the foyer we stood in front of a painted portrait of twin girls which revealed two actual creepy little girls who spoke in tandem to explain the history of the house which is where they died. They then preceded to float out of the painting and over our heads, after which the bookshelf swung forward revealing a secret passageway and the beginning of our adventure. 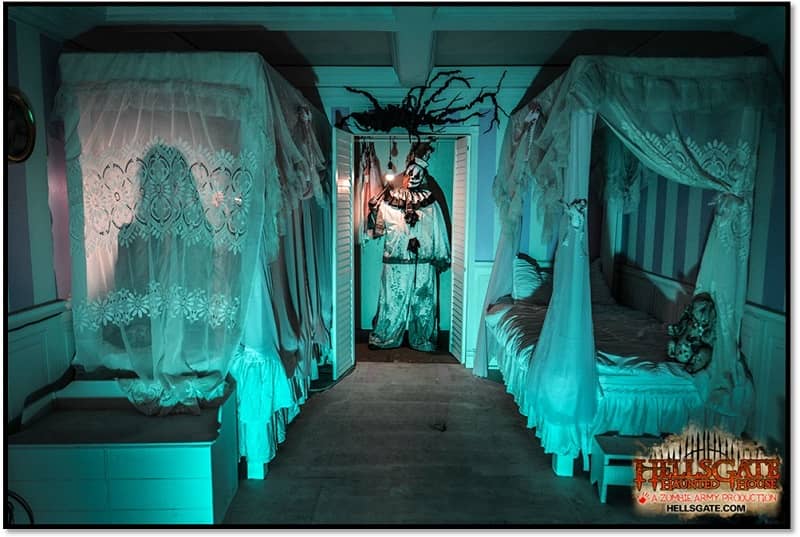 HellsGate — one of the bedrooms

What followed was 30 minutes of sheer delight as we explored the various rooms of the house and were accosted by its various dead residents. The ‘set dressing’ in every room was incredibly impressive making me wish I had more time to stand still and appreciate how realistic everything appeared, but the residents of HellsGate had clever ways to keep us moving. We quickly lost sight of the other four patrons we had entered with, which augmented the experience, making us feel we were alone in the attraction. Though it’s impossible to fully explain all the cool things we witnessed, a few moments stood out.

The entire ‘house’ structure is three floors, and on the first floor we discovered the ‘library’ with all its dozens of bookshelves toppled over and books spilling everywhere. There we encountered those creepy twins again, who were doing a gravity-defying scramble on the ceiling, down the walls and back up again. The combined effect of the room and these silent specters on their hands and knees crawling upside down on the walls was as incredible as it was unnerving.

Through the kitchen and the walk-in freezer where we had to maneuver around several whole pig carcasses hanging from the ceiling, then up a flight of stairs to the second-floor bedrooms. There we had to walk through a closet full of clothes that was not entirely unoccupied as well as several bedrooms where more unpleasantries lurked. Then it was up a final flight of stairs to the ‘attic’ with discarded toys and what looked like old travel trunks. A creepy old woman came out of the shadows and ordered Chris Z and I to each get in a trunk where we assumed we were meant to expire from lack of oxygen or a fit of claustrophobia. Bending down to look in, the trunks appeared solid, but as having two VIP ticket holders die on the premises probably wouldn’t result in good press, I figured things were not as they seem. I crawled in the trunk and the lid slammed shut behind me, however I quickly discovered the back of the trunk was squishy with a gap in it that I could push myself through. Within a few seconds I was free and standing in an adjacent room where Chris Z appeared a few minutes later.

After we finished exploring the ‘attic’ we were directed to sit and hang our feet over a ledge. It appeared we were going to be pushed out of the attic into a hole that would lead to us falling to our deaths in the basement, but what turned out to be the entrance to a two-story slide. We bounced our way down the very slippery surfaces shooting out onto a giant cushion in the ‘basement.’ It was there we finally encountered the dragons. HellsGate was showcasing the new effect to maximum benefit, and augmented by a second, older version of the animatronic. The dragons appeared to be crawling toward us through caves in the basement walls roaring and spitting fire. 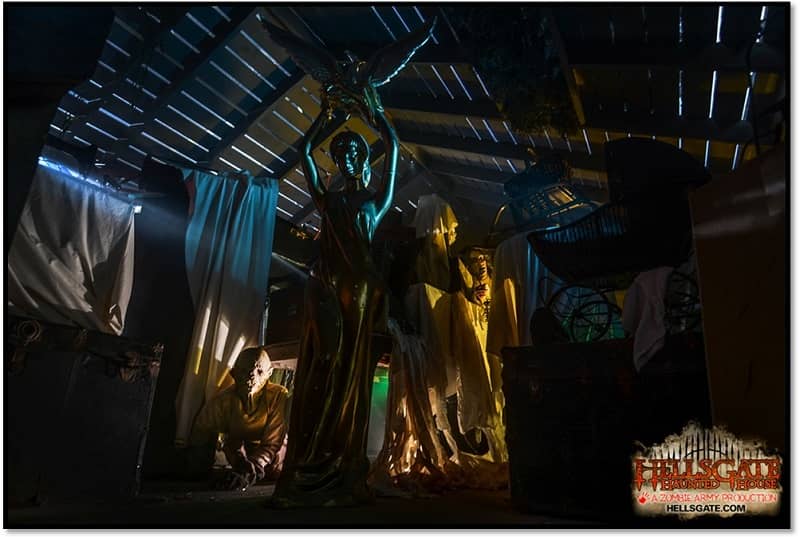 We finally escaped the basement through a maze of brick walls, exiting into – you guessed it – the gift shop. However, instead of a bunch of cheesy chotchkies, the shop was full of dark artwork reminding me of a New Orleans voodoo purveyor, with some of the pieces created by local artists of our acquaintance.

If HellsGate was 11th on HauntWorld’s list, I am now frantic to visit the top 10. Having seen as many haunted attractions as we have covered for Black Gate over the years, I must give HellsGate an enthusiastic 10 out of 10 for sets, costumes and a storyline that captivated from start to finish.

Have you visited an impressive haunted attraction this season? We’re dying to hear about it so post your experience here or drop a line to sue@blackgate.com.