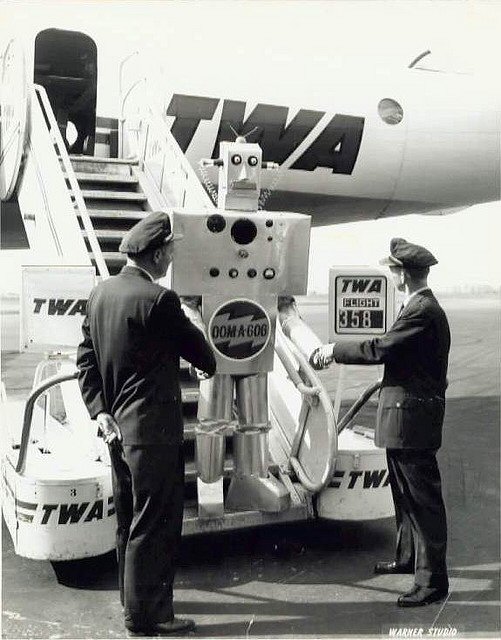 Through the number of television sets in living rooms rose exponentially from 1948 to 1958, programming lagged behind. At first networks provided their affiliates only enough programs to fill what we now call prime time. The rest of the day was filled in piecemeal over time, early morning shows, late-night chat, afternoon soaps and game shows.

Local stations had little choice. They found ways to fill in non-network time. Budgets were ridiculously small, just sufficient to hire a personable young newcomer willing to work cheap with few other props than a desk and a chair and their ingenuity in filling hours of airtime without a script. Steve Allen and Ernie Kovacs made their names with innovative and distinctive locals shows before the networks swooped them up. Thirty-year-old Betty White took over a show called Hollywood on Television in 1952. It broadcast five-and-a-half hours a day, six days a week for four years. (To fill up her copious free time she also starred in the local, later syndicated, sitcom Life with Elizabeth.)

Having no idea of what would work and hours to experiment with, local stations tried every type of show they could think of: cooking, gardening, public affairs, fashion. And then for the afterschool crowd, kiddie shows.

Hosts dressed up as a clown or cowboy or interacted with puppets or guys wearing silly costumes. Invite a few noisy kids onstage and the result was fun and games, usually literally. Since half a dozen space-themed television shows aimed at kids ran in the early 1950s, a science-fictional theme was inevitable.

One pioneer in the field was Morgan Kaolian, who was a commercial artist and the Art Direction of WICC, a UHF station in Bridgeport, CT. He built Gyro the Robot for the station’s children’s show, probably named Kids Corner, to be a counterpart to Trixie the Clown. “Trixie (Dick Chalmers) did tricks while GYRO drew pictures about outer space and sang with the kids,” reports Reuben Hoggett of CyberneticZoo.com where most of these pictures appeared.

WKY-TV, Oklahoma City, created their own kiddie space show in 1957, 3-D Danny. It starred Danny Williams, then still in the first decade of a sixty-year career in broadcasting. He played Dan D. Dynamo, three D’s. His robot companion was named Bazerk. There was also Ubic, who looks like a crewmember, or possibly a stagehand accidentally caught on camera.

On his webpage today, Williams is matter-of-fact about his creation, or perhaps just can’t spel none too gud.

Dan D. Dynamo was born and reared in Arcrod, the 3rd planet in the solar system of Ursa Minor and about the size of earth and similar in typography and climate.

A kinescope of an episode with the robot (pronounced Bazz-ark) can be seen on YouTube.

In an odd move, WKY sent the robot to WTVT in Tampa so that they could start their own 3-D Danny program. 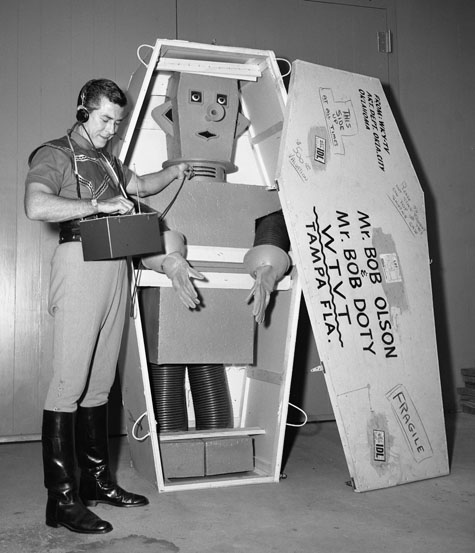 Ed Scott got the plum role of Dan D. Dynamo and college student Lyle “Red” Koch got a munificent $5.00 a day to play the robot and also Danny’s Lieutenant sidekick. To launch the show, WTVT asked viewers for a catchier name for the robot, drawing heaping piles of responses. The winner: Ruffnik, a play on the recently launched Sputnik monopolizing the headlines. 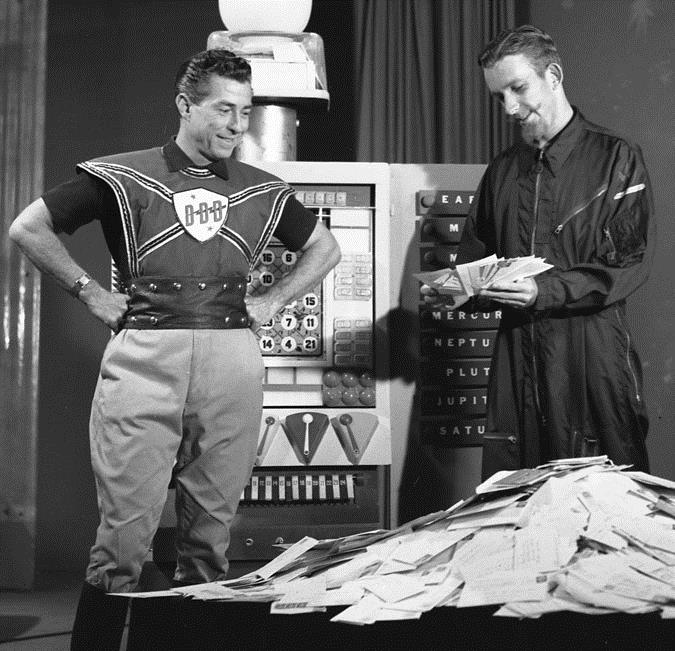 On set pictures show 3-D Danny being attacked by a space pirate while an out-of-costume Red Koch feigns unconsciousness and Danny is bombarded with space debris flung by a off-camera technician.

On WDAF in Kansas City, Dr. N. Ventor (Played by Murray Nolte) entertained kids with small inventions that always backfired. He main prop was a giant Idea Box which led into a cartoon when he pulled the right lever. 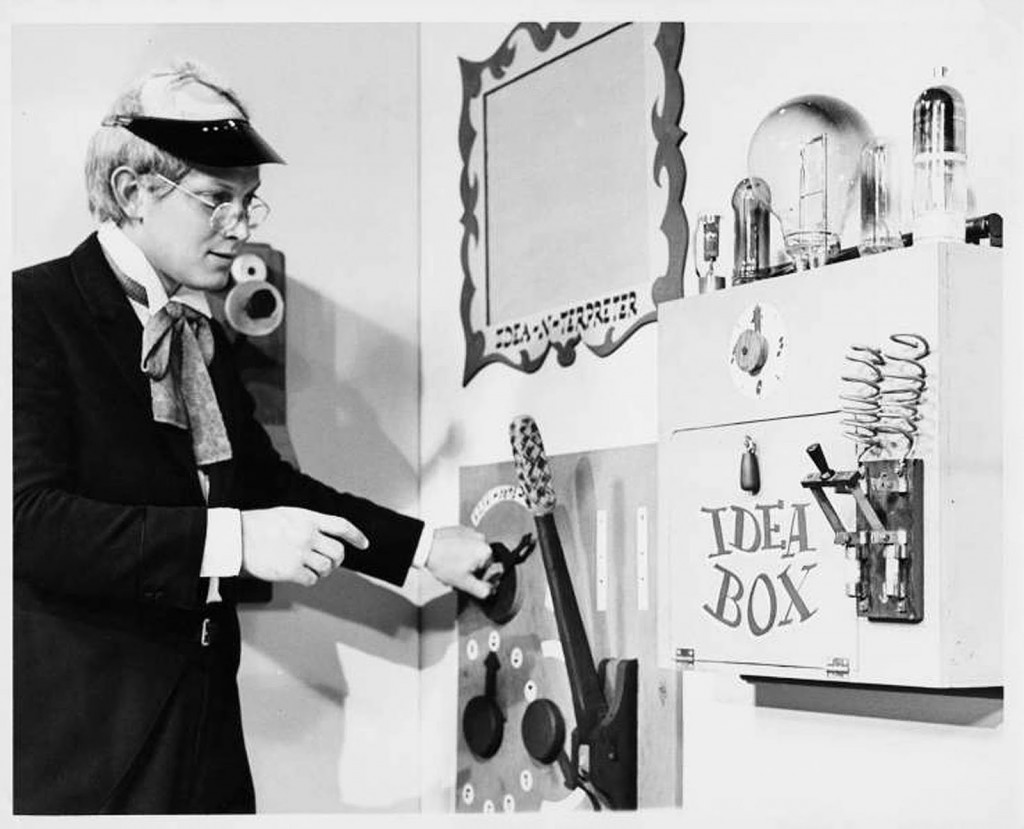 One day in 1956 he pulled the lever and the station went off the air through a coincidental failure of a transmitter tube. The phones lit up from concerned viewers. 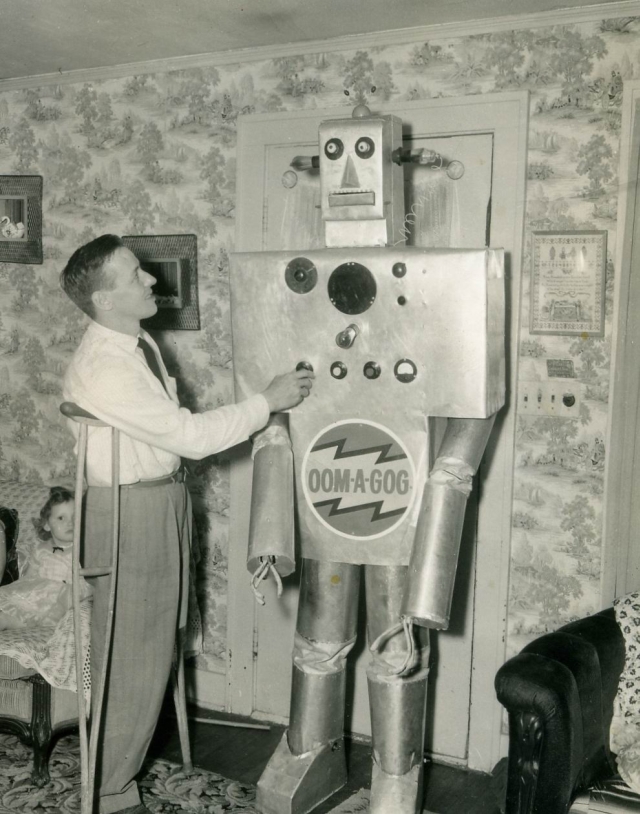 Sometime in 1959, inventor Jerry Berry created Oom-a-Gog the robot to be a foil for Dr. N. Ventor. His daughter Sharon, the little girl in that photograph, has vivid memories of the scary robot.

This was taken at my grandmother’s house. That’s me in the background with the scared face and that is my father. Oom-A-Gog was a bit more sophisticated-looking but it’s my understanding that after daddy passed away, the station up here was already changing his head. It looks like they tried to update him and moved some things around on his chest and added some things. But this is the original way he looked. I know he was hard to move around in with the legs and arms the way they were.

I know he made him in a tiny workshop in back of the house that was so small only 2 or 3 people could even stand in there at one time. Daddy was doing the beginnings of what Tulsa was able to do with Oom-A-Gog before he when he passed away. Oom-A-Gog was making appearances all over and I believe the picture of Oom-A-Gog on a TWA airplane [at top] was taken in Tulsa where he was a mystery guest on the Bowlin’ with Molin show.

Oom-a-Gog was a bigger star on KVOO in Tulsa starting in 1959. (Barry thinks a new Oom-a-Gog was made and there are indeed differences to its head.) He got his name in the title, Big Bill and Oom-A-Gog. Big Bill was played by Bill Blair and after that… I’ll let Alan Lambert untangle the chronology. 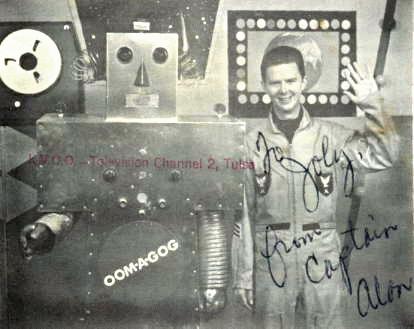 When I began working at Channel 2 (KVOO-TV in those days) OOM was played by camera crew chief, Dick Cardwell. After Big Bill left for Texas…OOM had a new sidekick named “Professor Dingle” (played by Dave Moore)…

After a few years of gathering dust… OOM-A-GOG was brought out of storage for a new show: Captain Alan and OOM-A-GOG (1966-1967). I was Captain Alan (I’m not making this up). The show aired each weekday afternoon at 3:30. We did the show live Monday through Wednesday. We videotaped Thursday and Friday shows on Wednesday nights…

OOM-A-GOG, The robot, was played at that time by Buck Clayton. (Buck was a part of the Channel 2 floor crew and I heard he later joined Greyhound Corporation.) I wore an orange flight suit similar to the ones the astronauts wore with black flight boots. Spiffy!

The set for “Captain Alan and OOM-A-GOG” was designed by Jerry Winn. It was made to look like the inside of a spaceship.

The original show ran from 1959-1964. It was revived for a two year run in 1966. Lambart told a story at the KVOO 50th anniversary celebration that epitomizes what working in live local television was truly like.

Buck manned the unwieldy Oom-A-Gog suit in 1966-67; an electronic device distorted his voice into a robotic monotone.

One day on the show, Captain Alan was busy with the kids when, behind him, he heard Oom-A-Gog say, “Captain Alan…” Alan replied, “Just a second, Oom-A-Gog.”

Soon, Oom-A-Gog was again heard to say “Captain Alan…” This time, Alan turned around and saw smoke issuing from the robot. The electronic voice module had shorted and set Buck’s shirt on fire inside the costume!

Captain Alan and a crewhand had to put Oom-A-Gog face down on the studio floor to open up the robot suit—it was impossible for Buck to get out of it by himself.

Other kids shows of the 50s and 60s had robots in their titles, but I couldn’t find information on them. And why not? Robots have highs and lows but never completely go out of style. What child wouldn’t want a seven-foot-tall horn-nosed playmate?

Steve Carper writes for The Digest Enthusiast; his story “Pity the Poor Dybbuk” appeared in Black Gate 2. His website is flyingcarsandfoodpills.com. His last article for us was Seleno, the Electric Dog.