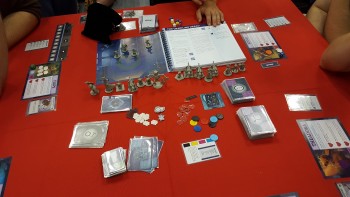 You are a stuffed animal, who has watched over and cared for your child for many years. Tonight is a big night, though, as the parents have bought your child a big girl bed. As the lights go out, your child goes to sleep for the first night without the protection of her crib. Little did you know that this was the night you were preparing for … when dark forces of nightmare would reach out for your child, trying to destroy the hope and joy that you cherish within her.

This is the premise of the board game Stuffed Fables, by Plaid Hat Games. Plaid Hat has created a number of exceptional games, including Summoner War and the zombie survival Dead of Winter franchise. Stuffed Fables is designed by Jerry Hawthorne, who is also responsible for Plaid Hat’s Mice and Mystics franchise games, including the spin-off battle game Tail Feathers. Each of the games is great to play and worth an in-depth review of its own, but for now, let’s get focus back on Stuffed Fables.

In Stuffed Fables, you are playing stuffed animals who go on a series of adventures to protect your sleeping child from the creatures of a dystopian nightmare realm. Each stuffed animal has different abilities to draw upon, and you can gain items throughout play that your character can use. Each turn involves pulling six-sided dice from a dice bag. The colors of the dice correspond to different types of task that can be performed, such as melee combat, ranged combat, perception/search, or resistance. White dice help you regain stuffing (which represent your health level) and black dice are accumulated to trigger the arrival of nightmare minions when the group has gotten too many. In addition to being able to save dice for yourself to use later, you can also use your dice to help others, so there’s some good strategic elements in this cooperative game, based on the various character abilities. 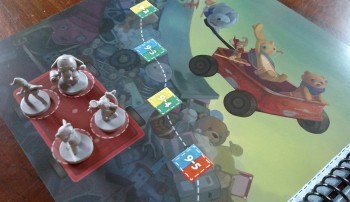 The design of the game is the Adventure Book game system, and Stuffed Fables is the first to use the system. (At the time of this writing, Plaid Hat is in the process of getting their next Adventure Book game, Comanauts, into distribution.) In addition to a rulebook, Stuffed Fables also comes with an Adventure Book that includes a map on one page and the unfolding story elements on the other facing page. Icons on the map indicate where to place your characters, and identify certain recurring game elements, while the narrative on the facing page progress the story, with different events triggering different aspects of the story to unfold. As each page is resolved, the book tells you which page to proceed to based upon the events that have successfully been resolved.

One aspect of this is that it allows for some scenes to unfold in unique ways, providing detailed directions for unusual scenarios to unfold. This happens early on, should the players find themselves riding a red wagon down a mountain of lost childrens’ objects, in pursuit of their child’s stolen blanket. Instead of the standard game play, the rules are outlined for a mini-game where each player is able to make choices between speed and control of the wagon, which can end in success or failure in getting to the bottom of the mountain in time to claim the blanket … or finding yourselves lost in the nearby woods.

The trackable resources for each character are their stuffing (health), as well as hearts that allow you to unlock more advanced powers. Buttons represent experience and money that can be used to buy upgrades throughout the game. As you interact with the map, a random deck of encounters can be engaged, where you are often making choices about helping toys in need, possibly putting yourself at some measure of risk to do so. Do you help the toy that needs repaired, perhaps even sacrificing some of your own stuffing to do so? If so, you might gain a heart for the effort, or it might be that you have wasted so much time in the process that your child is even nearer to waking up. 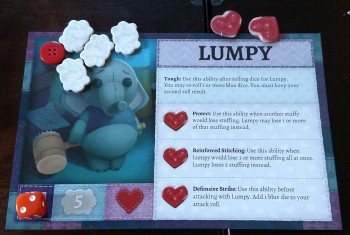 Finally, it is worth noting that the characters, and their corresponding miniatures, are adorable in this game. Those who know me are, I imagine, not surprised to find that I am particularly fond of the stuffed elephant called Lumpy. I early on got him the mallet which allows him to quite literally knock the stuffing out of other animals, in the sense that he can actually gain stuffing from enemies during combat. We haven’t gotten around to painting these guys up yet, but I’m desperately wanting to do so.

Certainly if you have kids and are looking for a fun, structured game to introduce them to the idea of roleplaying, then Stuffed Fables is one of my strong recommendations for this. The Adventure Book also suggests a rotating role for the person reading out of the book, which makes for good reading practice for younger gamers. You don’t want to hand this off for the little kids to play by themselves, necessarily, because there are a lot of different components to keep track of in the game, but so long as there’s a strong emphasis on the cooperative aspects of the game, it’ll be great family fun.

And for those who don’t have kids, the game stands on its own as a solid and fun game for adults who want to feel like they’re kids. Every aspect of the game’s story, from the random encounters to the over-arching plotline, has a thin, bittersweet mood that resonates with adults and older kids. In Stuffed Fables, you are not only reminded of the innocence of youth … you are literally fighting to preserve it.

You can find out more about Stuffed Fables at the Plaid Hat Games website, including ordering it, downloading the instructions, or watching a How to Play video, or you can order it from Amazon.