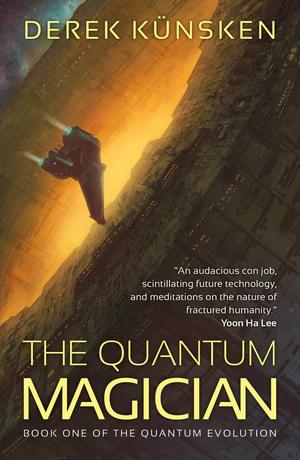 When I reviewed Yoon Ha Lee’s Ninefox Gambit last year, I joked that there’s a reason why I teach in the humanities, which is the same reason I don’t read a lot of hard science fiction. For me to enjoy a hard SF novel enough to discuss it here is a big deal – and I really enjoyed Derek Künsken’s The Quantum Magician, even though I’m sure that like Ninefox, I didn’t get as much out of it as someone else might have.

To be clear, the worldbuilding here is intricate, compelling and absolutely fascinating. From the moment concepts were introduced I wanted to know more, especially the different subsets of humanity that Künsken presents, each the product of generations of genetic manipulation. I mean, an entire population of neo-humans nicknamed Puppets because of their diminutive size, who double as religious zealots worshipping their divine beings’ cruelty? Or an intergalactic political hierarchy based on the economics of patrons and clients, complete with the inequalities and social issues you might expect? These demand further unpacking, which Künsken does with deliberate skill, slowly revealing more and more about humanity’s divergent offshoots and the galaxy they inhabit.

But I can’t say that I walked away from The Quantum Magician with a crystal clear sense of what I read. The core plot is a con game perpetrated by a team of ragtag scoundrels, trying to sneak a flotilla of warships through a wormhole controlled by another government… but don’t ask me to explain more than that. Künsken does an amazing job of presenting a bunch of quirky protagonists who play off each other well, but the characters that stand out do so powerfully; between that and the rich worldbuilding of things like the Puppets, I forgot about that flotilla and the original aim of the con for a good third of the novel, until they came back into focus.

Much as I rooted for protagonist Belisarius (who would be the Danny Ocean of these scoundrels) and his partner/love interest Cassandra (who I suppose is Tess and Rusty from Ocean’s Eleven combined), the secondary characters stole the spotlight for me, particularly AI-on-a-religious-mission Saint Matthew and the creepily dangerous Scarecrow hunting these scoundrels down.

All of that is because of me, not the novel, though. I’m sure that if I had a better mind for science (or maybe just read more Iain Banks or Cixin Liu) none of this would’ve been an issue. And I feel like this sort of thing is typical for hard science fiction. The focus is creating a world that’s bizarre but realistic, explainable based on actual scientific principles, and intriguing to read about.

Künsken does all of that superbly with The Quantum Magician, as well as providing delightfully entertaining characters and surprising twists and turns. Once I brush up on string theory, quantum mathematics and cognitive psychology (and make sure that second one is an actual term), I’ll read it a second time and probably appreciate it even more.