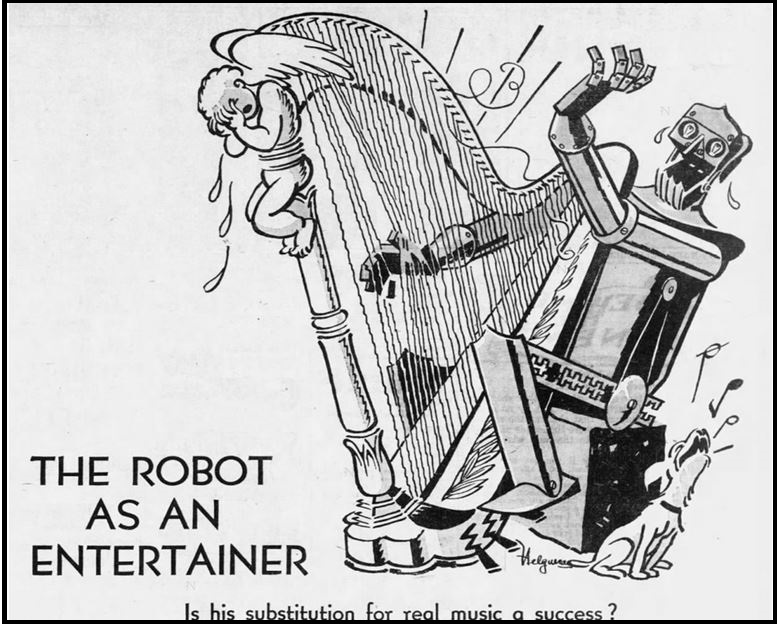 Probably the quickest and most thorough technological disruption in history was the introduction of sound to movies. A novelty when a few short scenes were included in the 1927 film The Jazz Singer, sound had almost completely taken over the industry by 1930 despite the at times desperate battle against the cost of changing by both movie studios and theater owners.

The havoc wreaked over Hollywood is the stuff of a thousand books. Performers, especially those dozens of stars who migrated from Europe to share in the movie boom of the 1920s, saw their careers disappear because of their accents or some other failing in their speaking voices. Writers who until that time could make do with plot outlines lost their jobs to stage writers accustomed to creating atmosphere from pure dialog. Cameramen found their expressively mobile cameras confined to soundproof booths whose heat could make them faint if a take too took long. Practically every craft got turned upside down and shaken hard – just as America started sinking into the Great Depression.

One allied but non-Hollywood aspect of the business got hurt worst of all, an entire profession wiped out in a matter of months. Who got the blame? Robots.

Movies may have been silent before 1927 (with a few experimental exceptions of varying quality) but performances almost never were. Virtually every depiction of an old-timey movie theater has the audience enthralled by the flickering black and white images on a screen, their mood set not merely by the pathos or adventure or romance or daring-do mummed by the actors but mostly by the guy banging the upright piano at the foot of the stage, pounding out thrilling chords of danger or the treacly tinklings of sappy happy endings.

Hogwash. The piano may have historic sources, but is wildly unrepresentative of the reality of most moviegoing experiences. Mood music was deemed essential from the earliest days. (The Lumière brothers used a guitarist as accompaniment as early as 1895.) Pianos were cheap and ubiquitous entertainment – I always remember Chico and Harpo Marx getting their show-biz starts as teens playing piano in a whorehouse. Pianos already resided in hundreds of the theaters and rooms adapted for the showing of movies; using them was a no-brainer. (Besides mood, pianos provided volume: loud music masked the intruding noise of the projector itself.)

Pianos, though, were strictly hicksville. As movies grew in length and prestige, only small neighborhood and rural theaters retained their use. Any theater catering to urban crowds treated them to a full orchestra capable of wringing cheers and sobs out of the stoniest hearts. Again, this goes back to the earliest days. Thomas Edison, slicker at promotion than most give him credit for, hired an orchestra to give his early projector system a boost at an 1896 motion-picture exhibition at Koster and Bial’s Music Hall in New York City. By the late 1920s, every city had multiple major picture palaces with full-sized orchestra pits that were de rigeur for a grand night’s entertainment.

Talkies hit these orchestras in their pits. When a movie carried its own soundtrack, it not only didn’t need competition from a live band but actively discouraged them. Musicians by the thousands suddenly found themselves out of a good gig at the very worst possible time.

The American Federation of Musicians (AFM), led by activist president Joseph N. Weber,  embarked in a quixotic effort to turn back the clock.

Machinery is performing great service for mankind. But a Machine is not an artist. The high purpose of Machinery is to save Men and Women from ignoble and soulless labor, not to perform tasks that are only well done by the hands and hearts of gifted musicians.

On October 21, 1929, readers of newspapers in major cities saw a huge advertisement headed by the fearsome harp-playing robot shown at top, decrying the new fad for “synchronization.” That had a specific meaning at the time, as an AFM rep explained the next day.

Synchronization of sound with motion pictures has impressed many as a great advance in the cinema field because it has made dialog pictures possible. Taking advantage of this new interest in movies, theatrical powers have sought to go further and introduce a highly profitable economy by substituting mechanically synchronized music for real music in theaters.

Machines ain’t got soul, a lament familiar to virtually every writer who broached the subject of robots in and out of fiction as technology swept through every industry and craft in early 20th century America. Robots, mechanical personifications of humans with almost literal tin ears, perfectly set forth what the AFM saw as the soullessness of remote music as opposed to the spiritual connection made by living musicians on-site. Two major robots – Eric, an import from England which did an America tour in 1929, and Westinghouse’s Televox – had put the breed into recent newspaper headlines. Robots were hot and far more picturesque than a reel of movie film.

The AFM budgeted $500,000 for an ad campaign in 617 American and Canadian newspapers. Their end goal was not clear then, nor would ever be. They could hardly expect the same public who had so enthusiastically embraced talkies, even frankly awful ones, to rise up en masse to demand that filmmakers return to silents. Handing out $100 to each of the 5,000 union members thrown out of work by synchronization would probably have gotten far better results.

Yet the campaign captured public attention. Instead of robots, the first few ads in 1930 – new ones appeared once or twice a month – contained membership blanks which readers were urged to send in to enroll themselves in the Music Defense League, “as one who is opposed to the elimination of Living Music from the theatre.” An AFM ad in March was headlined “1,785,229 Join MUSIC DEFENSE LEAGUE In Sixty Days.” Apparently the American public loved supporting underdogs as long as doing so didn’t affect them in any way. 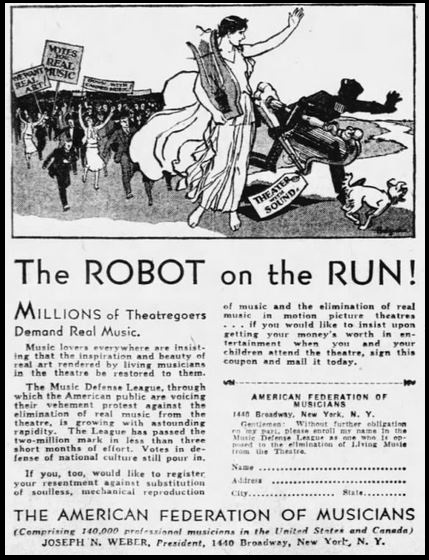 The AFM crowed about its success in an April ad that claimed -falsely -that the Robot was on the run, and followed it with a series of ads each depicting the evil Robot robbing people of their right to enjoy live performances. The Robot’s image changed slightly from month to month but always included googly eyes, a mouth like the scoop of a steam shovel, a body halfway between a tin can and a modern 9-volt battery, and erector-set legs. He had human-looking fingers useful for turning the crank on a grind organ or a Victrola, or for pushing aside the frail Euterpe, the Greek muse of music.

Newspapers regularly published editorials on the campaign and columnists opined as they are paid to do. Few of them thought it had any chance to work.

Theater owners are not to be condemned for going to the robot for their music. They merely acceded to a popular whim. … It cannot be said that pre-talkie music in motion picture theaters was generally of the highest character. [Asbury Park (NJ) Press, May 1, 1930]

Kicking the soulless robot on the shins doesn’t quite drive home the argument. … [People] will continue their preference for mechanical music because it is cheaper, because it reaches isolated communities, and because it gives music to those who could not otherwise afford it. [(Butte) Montana Standard, September 7, 1930]

The Robot, although quite in its infancy, has already presented the theater-going public with music fully as acceptable as any formerly presented by most local orchestras. [(Madison WI) Capital Times, October 5, 1930]

None of the nay-saying mattered. The AFM kept sending ads across the country month after month until the end of 1931. By then they had spent an estimated $1.1 million. More than 80% of musicians in the industry were now out of work. Only one major American film did not have a sound version in 1931, Charlie Chaplin’s City Lights. “My pictures will never have sound,” he assured fans.

By the end of the campaign, 40 ads had been seen by tens of millions of Americans. The AFM, clearly frustrated, saved the scariest for last. The Robot, dressed ludicrously in a white nurse’s outfit complete with high heels, purports to give a child her medicine but the “Wise Child” knows better than to take the poisoned pill of “Canned Music.” 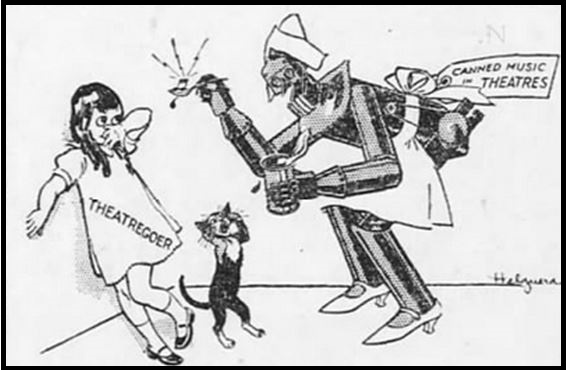 Weber refused to concede defeat. In 1932 he insisted that the now 3,000,000 members of the Music Defense League would somehow come through. The reality instead was that some of the pressure was off him; the rise of vaudeville as cheap entertainment had brought back jobs to his union members. Perhaps the only lasting result of the AFM’s anti-synchonization campaign was to perpetuate the robot’s inmage as a job-snatching villain. See my earlier column Verne – The First Federally Funded Robot for the government’s valiant work in trying to fight the stereotype. Exhibitions of purely fun robots like Westinghouse’s Willie Vocalite in 1933 and Harry May’s Alpha in 1934 made more of an impact. For the rest of the 30s robot menaces were more often to be found in science fiction pulp magazines than in newspaper headlines. Robots were good guys once more.

Steve Carper writes for The Digest Enthusiast; his story “Pity the Poor Dybbuk” appeared in Black Gate 2. His website is flyingcarsandfoodpills.com. His last article for us was We Buy Us a Robot. His book on the history of robots in popular culture is scheduled for a 2019 release.

Wow, quite a lot of money to invest fighting a losing battle.