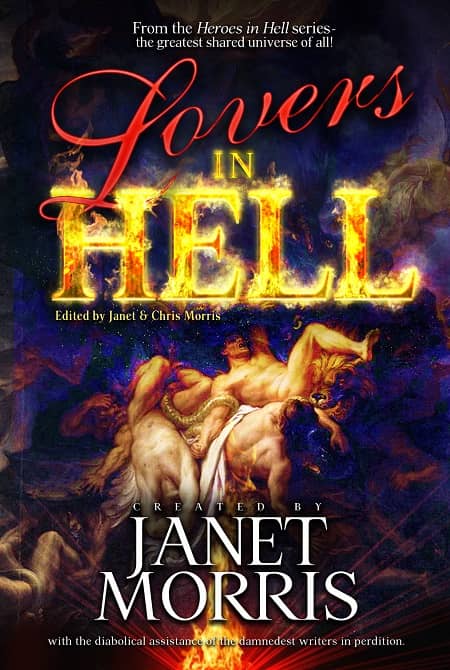 In Lovers in Hell, the overall story continues with the primary arc of Erra, the Babylonian God of Mayhem and Pestilence, and his Seven Sibitti warriors punishing the innocent and guilty alike, not to mention Satan’s obliteration scheme, designed to destroy all hope. Since love fosters hope, this book-length arc is about lost loves, lost hope, lost opportunity, and the plight of those whose lovers have been obliterated or want obliteration. The fear and temptation of obliteration spreads throughout hell, calling the Undertaker and all he stands for into question and putting more stress on those in Satan’s domains, while the Mortuary becomes dysfunctional and botches many resurrections. Some hope to avoid the purge by fleeing to the nether hells, where Judges reside who might save them. Others are wracked by fear of loss and go into hiding. This sounds pretty dark, but it does have a humorous note, primarily in the screw-ups plaguing all the infrastructure of infernity as people disappear and what they know, and what they knew, goes with them.

The plagues are evolving, the floods have left a new coastline to explore, and many displaced souls wander about, lost, confused and frightened. Lovers may have been separated in the disasters or shunted to a part of hell where they know no one, and lovers may have been torn apart by plagues or purges or human error. Oblivion is transitory, but Obliteration is forever: obliteration erases not only who you are but who you ever were, and yet … should obliteration be only partially successful, then those persons may not remember who they are or why they were sent to hell in the first place — or they may simply be gone, disappeared, leaving only physical clues behind that he or she had ever been. Obliteration is meant to show those Above (ie: Heaven) that Satan is on the case, making hell more hellish.

So let’s take a quick look at the stories in Lovers in Hell, in the order in which they appear.

We start off with “Love in the Afterlife, Part I or Never Doubt I Love,” by Janet and Chris Morris.

Christopher “Kit” Marlowe thinks to sell his soul to the auditors from Above but loses all he loves to lies and Satan’s foulest plans. Six angels, an English lord, and the devil himself dive into the furred and now angel-feathered melee to catch and separate the combatants, removing the frantic Michael, Satan’s favorite “hellpet” familiar, from the unrepentant jaws of Boatswain, Lord Byron’s dog.

“Love Interrupted,” by Nancy Asire, takes us to visit the always-interesting Hellview Estates, where Napoleon must face two former wives and his lover in a bizarre set up.

In S.E. Lindberg’s “Lovers Sans Phalli,” the lovers Hatshepsut and Senenmut depart the realm of Duat and make toward hell proper, after Anubis removed their hearts and broke their toy phallus. There they find Osiris, who is missing the penis he requires to retake the realm from Satan’s influence. The infamous, tomb-raiding Howard Carter and discredited evolutionist Ernst Haeckel quest with the Egyptians, seeking to make everyone whole again by stealing genitalia from the Undertaker’s Mortuary. 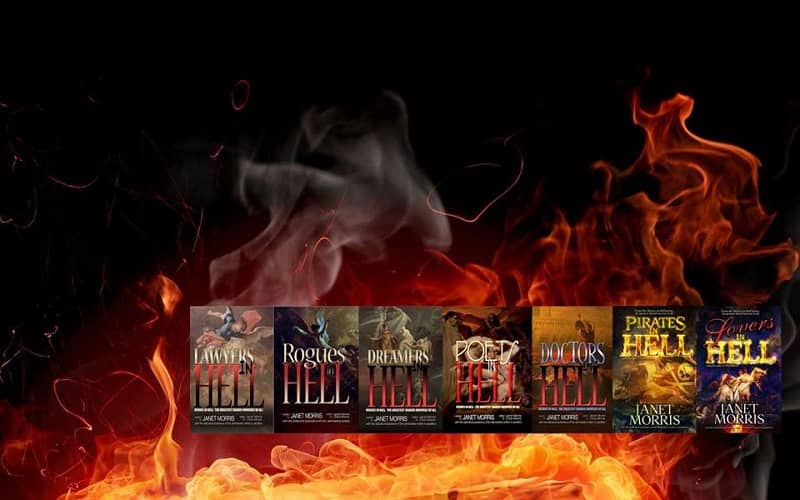 Next up is “Love in the Afterlife, Part II, or Fume of Sighs,” by Janet and Chris Morris.

While trying to free Eurydice from Hades’ realm, Orpheus encounters a three-headed monster and souls much worse.

Not god nor goddess nor angel spoke another word, so Orpheus took the lyre from his sopping lap and began to play and sing.

“Calamity,” by Michael E. Dellert is next: When they were alive in medieval France, Peter Abelard and Heloise d’Argenteuil were lovers and academic rock stars. Sadly, their legendary romance ended in tragedy: castration, excommunication, and a lifetime confined to a nunnery. Now their tragic love binds them together in the Afterlife. But can Abelard and Heloise remain united against all that Hell can throw at them? 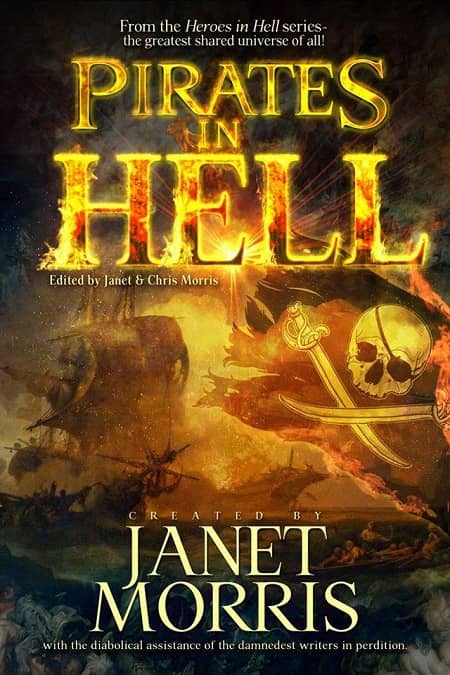 Michael Hanson’s “Love Triangle” deals with Euphemia “Effie” Gray (infamous Victorian era divorcé) who is sorcerously chained to her first husband John Ruskin, the art critic. Effie spends eternities in Hell suffering and hopelessly searching for her true love and second husband, Pre-Raphaelite painter John Everett Millais, until the day when she finds her tormented ex-lover in a macabre corner of damnation.

In A. L. Butcher’s “A Hand of Four Queens,” we meet Helen, the woman whose infidelity caused a decade of war and the fall of a city-state, and now yearns to free herself from her curse. Teaming up with her half-sister Clytemnestra, Penelope of Ithaca, and tragic Queen Dido they set out to destroy the Cursed Apple – root of all their woes. But this is hell, and plans always go awry, friends are often enemies and curses linger in the most outrageous of ways.

Now we come to Andrew Paul Weston’s “The Devil’s Trull”: When Chopin and Tesla orchestrate the ultimate opus magnum to evade injustice, you can be sure Daemon Grim’s response soon has our despicable duet beating a retreat into the deepest, darkest pits of despair. Hearts aren’t the only things that get broken in this virtuoso performance that proves once and for all, when it comes to improvisation, Satan’s Reaper will bring the house down.

In my own contribution, “Withering Blights,” I offer you an infernal version of a Gothic romance. To wit, in an effort to provide the Elephant Man with a new body, as well as a new pair of eyes for his eyeless companion, Antonia Ford, a former Confederate spy during the American Civil War, Doctor Victor Frankenstein and Quasimodo are forced to do business with the two most famous body snatchers in history, William Burke and William Hare. But the fly in the buttermilk in this tale is the treacherous Francois Villon, the Vagabond Poet of France. 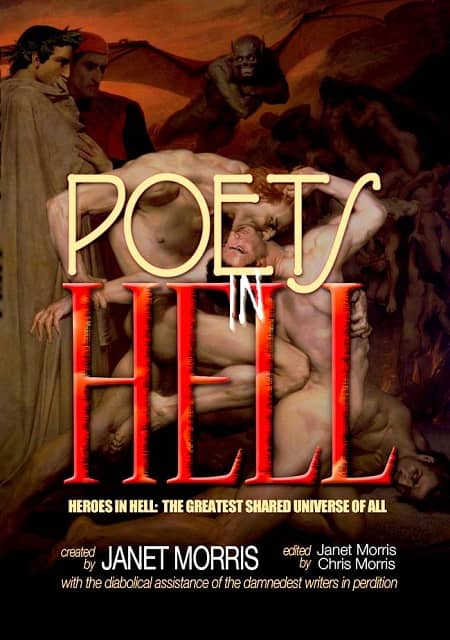 Our final story is “Love in the Afterlife, Part III or Wrath of Love,”anet and Chris Morris.

When Orpheus and his beloved return from Hades, Kit Marlowe makes a desperate gamble to regain lovers lost.

He’d done worse. Or so Kit told himself.

Henceforth, betrayal’s heady brew must sustain him. Defending Shakespeare, he’d lost all: his friend, his playhouse, and the sylph called J, disappeared since he and Will had parted.

But wait… Lovers in Hell isn’t through with you just yet! There’s fiendishly clever excerpt from Andrew Paul Weston’s forthcoming novel … Hell Gate. But you’ll have to wait until the second part of my glimpse into this latest volume of Heroes in Hell when you’ll be able to read that excerpt. Until then … remember: Live. Die. Repeat. That’s what hell’s all about.

Joe Bonadonna’s last article for Black Gate was A Small Gang of Authors: An Effective Promo Group for Writers.

Thank you, John O’Neill for giving my article such loving care, as always.

Wonderful overview, Joe. Heroes in Hell is a unique mix, saturated with dark fantasy and humor. Proud to have contributed and associated with the whole damned lot. BTW, Howard Carter is still taking bids for Osiris’s phallus … so if there are any buyers out there, I can help make the connection.

Thank you, Seth. I’m for sure going to mention that Carter has been financing Victor’s experiments, but due to circumstance beyond his control he cannot supply the good doctor with any more gold. 🙂

Excellent post there, my friend. And a nice reminder of the other anthologies leading up to the current release. Much appreciated.

Thank you, Andrew. These are always fun to put together. You’re up next, in Part 2.