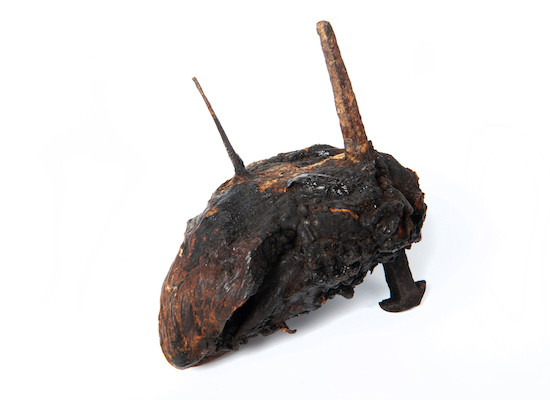 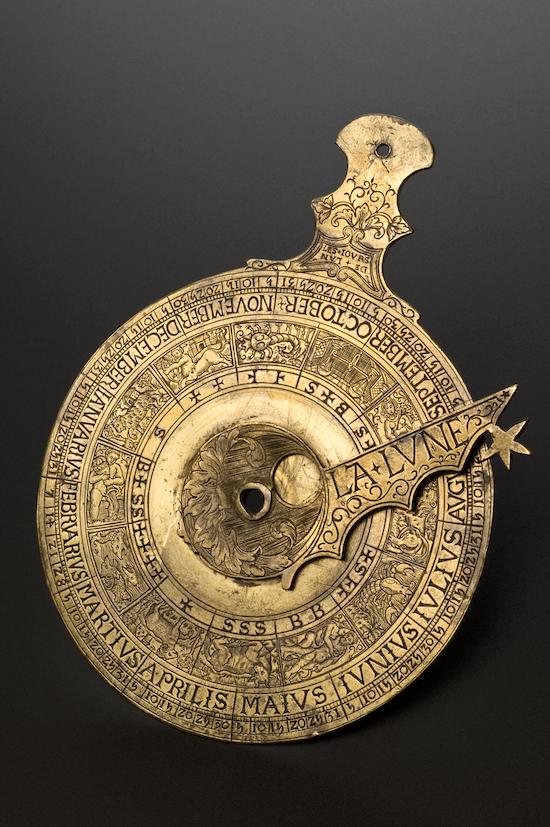 Prognosticator used to calculate propitious bloodletting times
according to the position of the moon. Brass, inscribed with
the date 1538, probably French. (c) Science Museum, London.

Beside various objects are signs posing questions such as “Do you have a lucky object?” (No) and “Could you stab an image of a loved one?” (It wouldn’t do any harm, except perhaps a bit of psychological damage to myself). There’s also a display of modern magical items such as love locks and various neo-pagan objects.

The historical objects are fascinating and varied, and there are so many worth sharing that I’ll be posting images of them over two posts. The wall text gives information about how these objects were used, at least as much as folklorists know. For example, everyday objects were often placed in hidden areas of the house such as walls or under floorboards to protect against witches, but why did the 19th century resident of a house in Water End, Hertfordshire, stuff his wall with two adult shoes, a man’s wool hat, six glass bottles (one green, two blue, and three clear), three metal lids, a metal bucket handle, scissors, a fragment of linen toe with knotted strings, a clothes peg, and pages from newspapers dated 1895 and 1896? Over in Cuckfield, Sussex, a resident chose to put under his floorboards a child’s dress, a doll’s arm, a child’s exercise book, two railway timetables, a cigarette packet, two jars, and eleven shoes. Why not just use a witch bottle and have done with it? 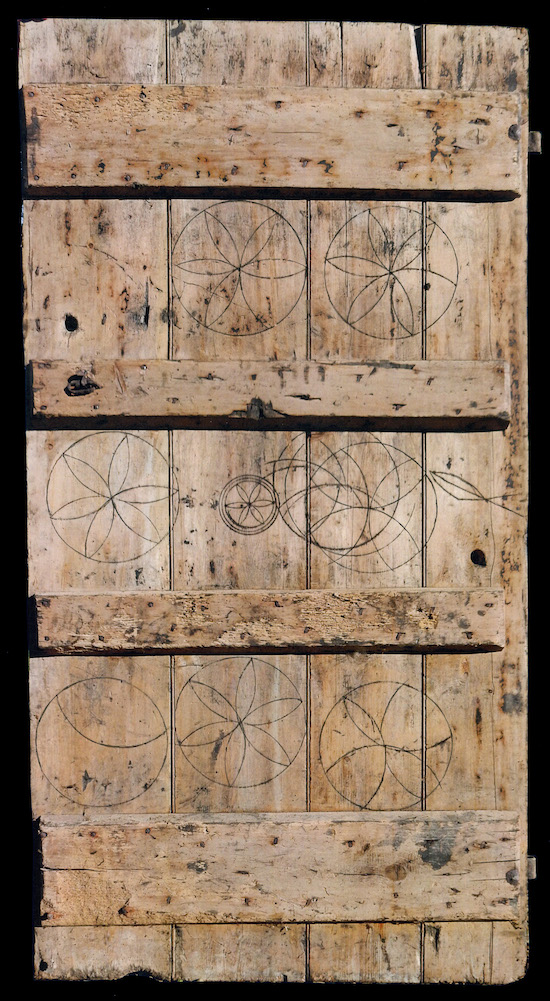 Less effective were some modern art installation pieces that were supposed to evoke an emotional reaction among the visitors. I did not connect with these, and judging from the scant notice everyone else gave them, I don’t think the majority of other visitors did either. The objects themselves had enough emotional resonance that the art was superfluous, and no doubt expensive. The Ashmolean does not need to experiment when they have such an intrinsically interesting exhibition.

Scroll down for more images! 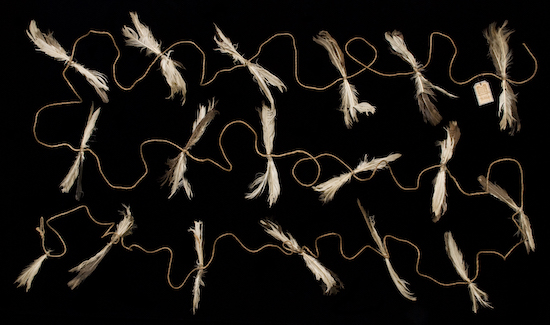 “Witches’ ladder” found in the roof of a house in Wellington,
Somerset, 19th century. While it was widely reported as a cursed
object designed to bring death to its target, it may have simply
been a type of scarecrow, suspended from a branch in order to
scare away birds. This shows how objects can take on different
meanings when found in unusual contexts. (c) Pitt Rivers Museum,
University of Oxford. 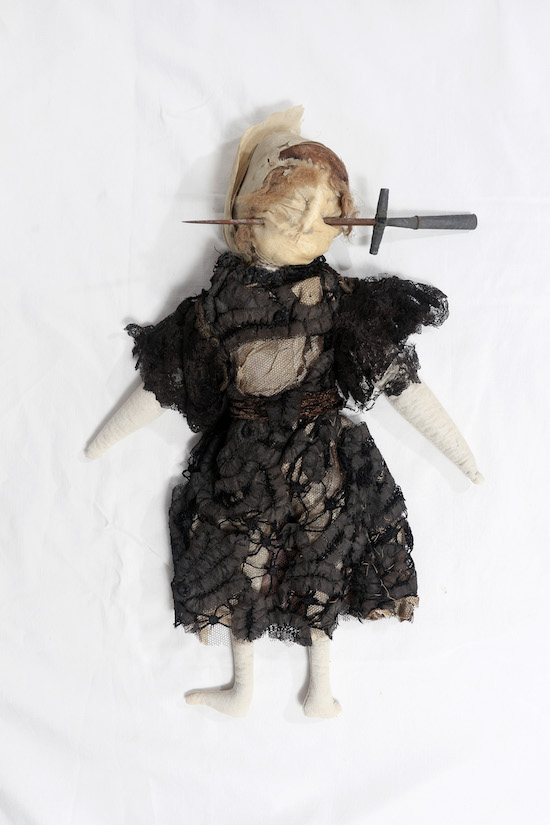 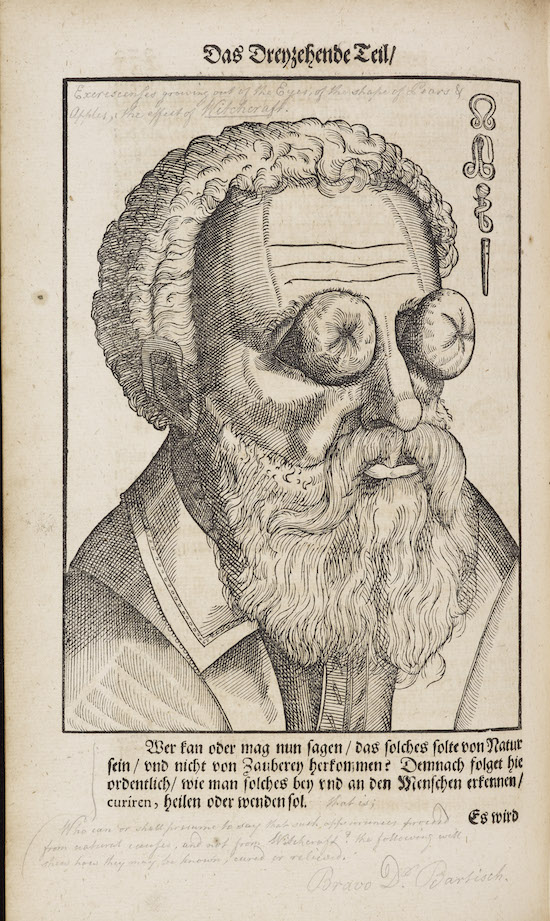 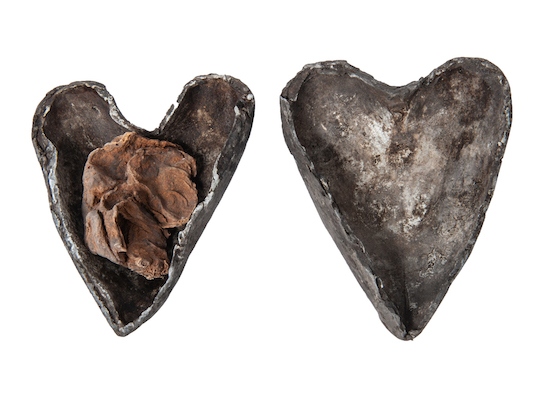 Human heart in heart-shaped lead and silver case
found concealed in a niche in the pillar in the crypt beneath
Christ’s Church, Cork, 12th or 13th century.
(c) Pitt Rivers Museum, University of Oxford. 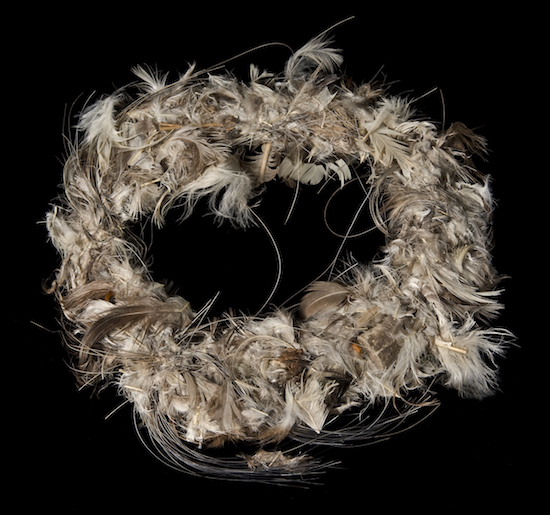